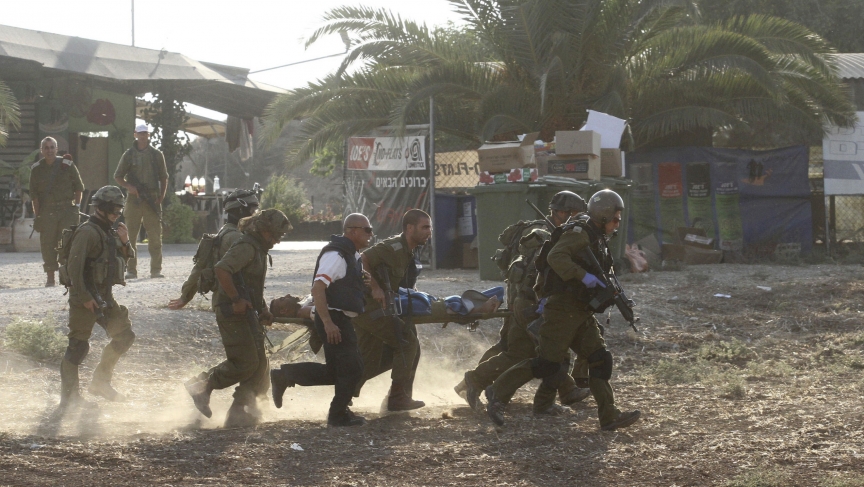 Israeli soldiers evacuate a comrade after he was wounded in a Palestinian mortar strike inside Israel on Monday.
Credit:

The war between Hamas and Israel isn't likely to end any time soon, despite a ceasefire and glimmers of hope over the weekend.

Israeli Prime Minister Benjamin Netanyahu warned his people on Monday to be ready for a protracted campaign in Gaza. But that doesn't mean a long-term Israeli army occupation of the Gaza Strip is likely. Even as Netanyahu called for the demilitarization of Gaza, “he said that’s an overall political goal. He did not say it’s a specific goal of the current military operation," said Ofer Zalzberg, a senior analyst with the International Crisis Group in Jerusalem.

Zalzberg says Israel has the military might  — and money — to forcibly disarm Hamas, but it can't be accomplished any time soon. “The assessment by experts is that such a campaign would take one to two years to fully dismantle Hamas’ military infrastructure," Zalzberg says. "That is to say, arrest all the leadership, take out all of the armaments, shut down all of these tunnels.”

For now, the destruction of those "terror tunnels" remains the explicit goal of the Israeli operation in Gaza. Netanyahu mentioned that objective during his speech on Monday, and Zalzberg says Israel won't leave the Gaza Strip until the tunnels are gone.

Israel doesn't have the political will for longer efforts meant to totally destroy Hamas, Zalzberg suspects. But he notes that Israel’s goals have already shifted as the conflict has developed. “We can see that Israel is getting pulled into a deeper and more extensive campaign every day," he says.

There's political pressure from the hawks in Israel's governing coalition — officials like Foreign Minister Avigdor Lieberman and Economics Minister Naftali Bennett — to do more in Gaza. Public opinion also appears to be hardening.

“But there’s still no majority for re-taking the Gaza Strip," Zalzberg insists. “Netanyahu would very much like to avoid (doing this) and so would the defense establishment.”