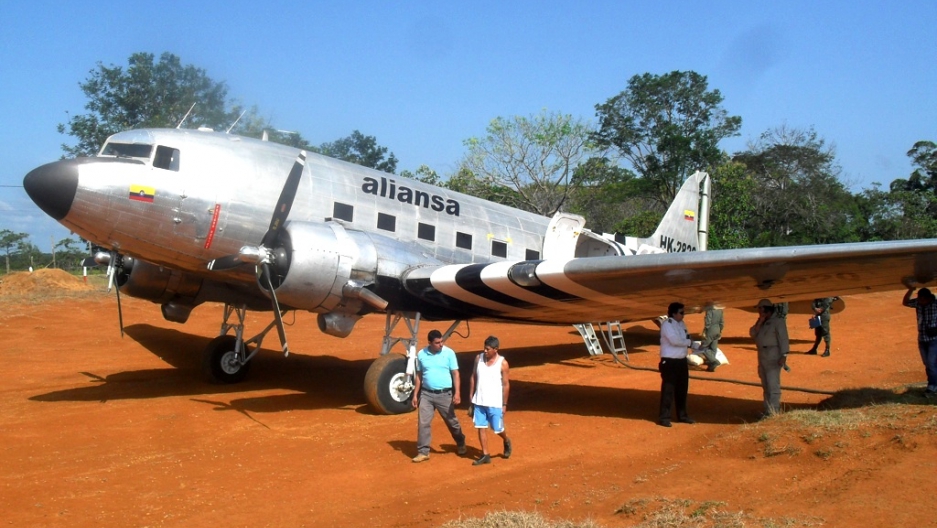 In rain forest hamlets where runways often consist of bumpy dirt clearings too short and rough for most commercial aircraft, the twin engine Douglas DC-3 is a jungle workhorse.

A tail-dragger that flies low and slowly, and features sturdy landing gear with balloon tires, the DC-3 can put down on pocked air strips as short as 600 yards. The aircraft can carry everything from passengers to livestock to small vehicles. Some affectionately call it the mule of the Amazon.

In this pancake-flat expanse that’s home to cattle ranchers and subsistence farmers, as well as a smattering of Marxist guerrillas and drug traffickers, there are few roads. In the dry season, winding Amazon tributaries are often unnavigable. So, the DC-3 is the only practical way in and out.

For airplane buffs, the DC-3 is an icon. Between 1934 and 1945, about 16,000 were built in the United States where their speed and range revolutionized commercial air travel by reducing the time of coast-to-coast flights. The military version of the aircraft, known as the C-47, served as troop transports for the Allies at Bastogne and Guadalcanal during World War II and took part in the 1949 Berlin Airlift.

Since then, most have been mothballed. But a small fleet found its way to Colombia, where the DC-3 is reliving its glory days.

To first-timers, the plane looks like it belongs in a museum. In the cockpit of a DC-3 built in 1944, operated by a seat-of-the-pants airline called Aliansa, the compass is held in place above the control panel with bungee cords. The plane lacks an autopilot. Passengers inquiring about the nonexistent restrooms are told to grin and bear it. A mechanic with a massive toolbox always rides in the jump seat behind the pilots. The plane also carries engine cylinders, brake pads and other spare parts as well as a flare gun, a machete, and canned food and water — just in case.

Indeed, things can and do go wrong. On May 8, an Aliansa DC-3 crashed in the southern department of Caqueta, killing the three crew members and two passengers onboard. The cause of the accident is still under investigation.

But as he takes off and points the plane south toward the village of Miraflores, pilot John Acero lauds the DC-3. “This is a special airplane,” he says over the roar of the engines. “It doesn’t matter if the runway is full of mud or water because this is a very manageable plane. It does whatever you want it to do.”

More from GlobalPost: Colombia's controversial coca spraying could be the next drug war casualty

On this flight, the DC-3 is equipped with a massive rubber bladder holding 1,000 gallons of helicopter fuel destined for the Colombian army base at Miraflores, a hamlet in Guaviare province that in the 1990s was a cocaine boomtown controlled by the guerrillas. In those days, Acero recalls, he sometimes landed in Miraflores with the back of his plane filled with prostitutes.

After an hour, there’s a break in the jungle and Miraflores suddenly appears. The DC-3 banks low over the murky Vaupes River and touches down on an orange-brown dirt strip that runs through the middle of the town.

The runway’s location is testament to its importance, but security can be an issue. The airport lacks a control tower and people use it as a playground, pasture and all-purpose thoroughfare. On a few occasions, approaching DC-3 pilots have had to swoop low and rev their engines to scare away stray horses and drunken villagers wandering across the runway.

Acero taxis to a halt then pops open the cargo door, allowing soldiers to drain the helicopter fuel. There’s no terminal, so in the 80-degree heat, passengers for the return trip crouch in the shade of one of the DC-3s silver wings. One is the husband of a woman who was bitten by a snake and was evacuated to a hospital in San Jose del Guaviare via a tiny Cessna air ambulance. There wasn’t enough room for a second passenger so Acero agrees to take him.

Before departing, Carlos Gomez, a member of the village council, collects a small landing tax from Acero to help maintain the runway. Gomez, who was born and raised in Miraflores, points out that the one road out of town is in such bad shape that it’s only good for motorcycles. The Vaupes is often too low for riverboats. Despite its age, he says the DC-3 helps residents feel connected to modern Colombia because in the space of an hour or so it delivers them from the isolated jungle.

With the gasoline bladder empty, the passengers buckle in to fold-down seats and the DC-3 roars down the runway and lifts into the air. In the cockpit, Acero, who has been flying DC-3s for 30 years, wonders how long they will last. Spare parts are getting harder to find and there are only a handful of old-timer mechanics familiar with the aircraft. When the last one is retired, he predicts hard times for places like Miraflores.

“The day they stop flying, these people will face hunger and poverty,” he says, “because no other planes will fly here.”