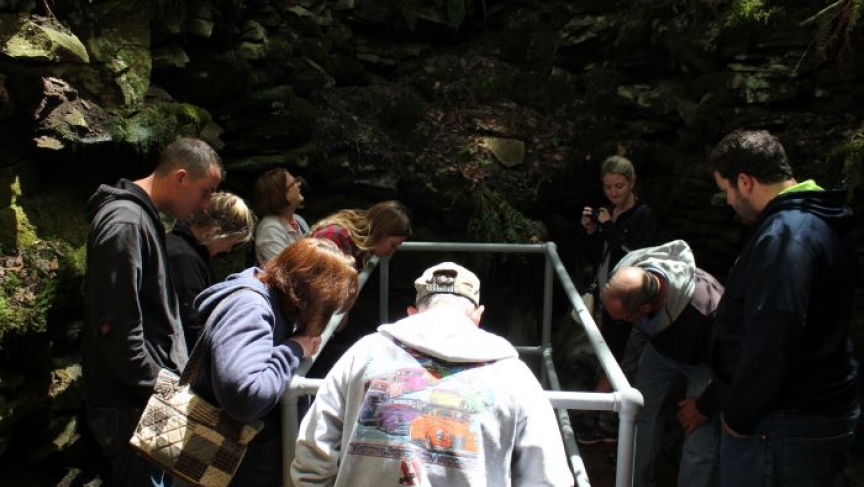 Tourists crowd around the pit in the Coudersport Ice Mine, a Pennsylvania tourist attraction where ice only forms during the summer.
Credit:

At this time of year, many people head for the shore or the mountains to escape the city heat. But there’s a special spot in the Appalachian Mountains of Pennsylvania that’s as cold now as it is in winter.

The Coudersport Ice Mine in Potter County is a little different from the usual campsites and hiking trails. It's a cave where ice forms — but only in the summer.

It's actually one of many so-called “cold spots” in the mountains from southern New York to West Virginia. The Coudersport mine was found by a silver prospector in 1894 and used to store meat. Then it was turned into a tourist attraction in the early 1900s, but closed down in 1989.

But after a 25-year hiatus, the mine reopened for tourists last month. Diana and Gary Buchsen, who own a nearby inn, bought the old ice mine about a year ago. Diana says the cave will never be Niagara Falls or an amusement park. She wants visitors to experience something else here.

"I just hope they take that quietness, and peacefulness, and stress-free lifestyle that we’re hoping to promote up here," she says.

A lot of folklore is attached to the Coudersport Ice Mine, including the rumor it’s man-made. Some people, even locals, can’t believe that ice inside the mine only forms during the summer.

But 19-year-old Jeff McManus is a believer. "My dad was a tour guide in the 70s and my grandma worked in the gift shop in the 50s," he explains. Now he's a tour guide himself.

So how does the summer ice work? "During the winter, the air is pushed into the mountain, because the rocks are layered like this through the whole mountain," McManus explains, "and then in the summer, the air comes out, mixes with the humidity and the heat, forming the ice." At least, that's the best guess.

No matter how it forms, there are 18 inches of ice on the bottom of the mine and people are crowding in to see it.

Inside the ice mine itself — it’s a small dungeon-like room that’s open at the top — small groups of people can gather around a wooden platform and lean over the metal railing that surrounds an opening into the earth. It’s really just an eight-foot by ten-foot pit, a cave a few dozen feet deep. Below the platform, there are icicles like elephant tusks clinging to the sides of the mine.

"This is what I remember last time being here," says Kevin Staffa, who's visiting with family from New Jersey. The Staffas were here once before the mine closed in 1984. Everything is the same, including the 32-degree temperature.

All around the opening are layers of rocks, covered in moss and dripping with water. But looking up through the opening, you can see clouds and old hemlock trees swaying in the breeze.

Ironically, hotter weather means more ice, not less. "A few weeks ago there was ice around the whole entire thing, touching the bottom," McManus says. "But because it’s been colder weather, and we had all this rain, it’s broken down inside."

That hasn't stopped people from visiting. So far, hundreds of people have come to take a peek at the ice and sign the guest book — some from as far away as Germany. And Chris Herzig, a cousin of Diana Buchsen, even has a new idea to promote the mine.

"Those of us that are of a certain age that have hot flashes," she says with a laugh. "There should be a special ticket that you can go in and out as many times as needed for medicinal purposes."