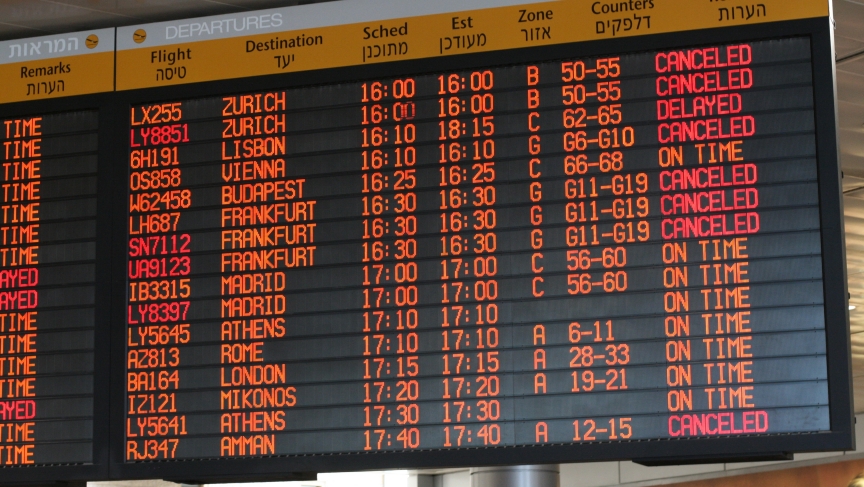 Flights from Israel had partially resumed Friday, but there were still plenty of cancellations. The FAA ban on flights to Tel Aviv left many Israelis feeling claustrophobic and isolated — even if only for two days.
Credit:

As Israel and Hamas continued to battle this week, there was one unusual casualty: flights in and out of Ben Gurion, Israel’s only international airport.

On Tuesday, after a rocket from Gaza landed about a mile from the airport and demolished a home, the Federal Aviation Administration ordered American carriers to stop flying to or from Tel Aviv. Several European airlines also followed suit, their decisions sparking outrage in Israel.

"This decision only rewards the Hamas terrorists for nothing," Israeli Prime Minister Benjamin Netanyahu said at the time. By Friday, most of those carriers were back in Tel Aviv. But the travel ban has left a deep imprint on Israelis.

"I think they really touched the weak point of the Israeli psyche," said Benny Ziffer, a literary editor for Israel's Ha'aretz newspaper. He said the airport ban will be remembered long after the guns go quiet.

Hamas spokesman Fawzi Barhoum prodded that weak point when he said that “stopping air traffic and isolating Israel from the world is a great victory for the resistance.”

Israel is a small country that borders hostile countries in the north — Syria and Lebanon — and has formal but cold relations with Egypt to the west and Jordan to the east. That means that Israelis have to go farther abroad to connect with the world.

Ziffer said the past few years have seen a frenzy of applications for European passports, and young Israelis have famously been moving to Berlin in droves. They also cherish making trips around the world after completely their mandatory army service.

"The possibility and fantasy of being open to Europe is always something very dear to Israelis," Ziffer said, "and at that point this fantasy had been hurt — let’s say erased — from the list of possibilities."

And indeed, isolation was on the minds of Israelis following the ban. After the FAA issued its restrictions on Tuesday, almost half of the flights in and out of Tel Aviv were canceled. The ban was lifted Thursday, but traffic was still light.

At Ben Gurion itself, a soldier named Lior, there to pick up his sister, insisted it was safe to fly to Israel — even as he hustled into a bomb shelter when a siren sounded. But if the ban went on for weeks, he said, Israel would feel "isolated. I mean ... its like the world doesn’t accept us or something like that."

Nearby, Sagi Rochel stood with his wife, children and two carts full of suitcases. Despite the resumption of many flights, his Serbian Air flight to Belgrade was canceled just hours before takeoff. Sagi said he remembers the 1991 Gulf War, when Iraq fired Scud missiles that landed in Tel Aviv.

"Even in the Gulf War, the planes were still flying. The airport wasn’t shut down ... everything kept going," he recalled. "I don’t know. This is the first time I remember so many cancellations."

That’s in part because Israel and Hamas are still fighting — and tourism in Israel has plummeted. In the airport, a siren signaling an incoming rocket is a reminder that the war is never far off.

"Until now in this war going on in Gaza, I think this is most serious thing that has happened to Israelis, more than the casualties and the dead soldiers, said Ziffer, the Ha'aretz editor. "In the collective sense of this war, this is the crucial point."