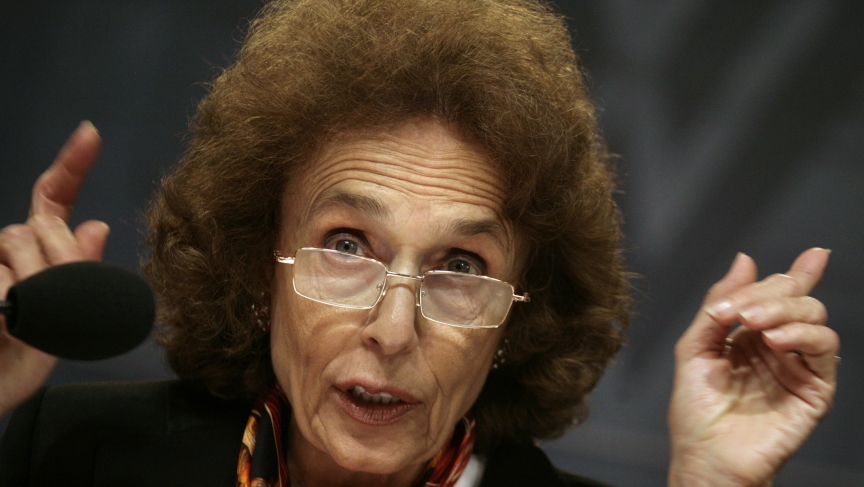 Haleh Esfandiari, director of the Middle East program at the Woodrow Wilson Center, gestures during a news conference in Washington September 10, 2007. Esfandiari was freed on bail in August 21, 2007, after three months detention in Iran on spying charges.
Credit:

It's something we've become sadly used to hearing out of Iran: Another foreign journalist has been arrested. The latest case actually involves four journalists, American Jason Rezaian of the Washington Post, his wife Yeganeh Salehi and two others.

They're by no means the first journalists to be taken by Iranian officials. Haleh Esfandiari was arrested in 2007 and held in Tehran's Evin Prison for 105 days. It's a terrible place. And she had to endure terrible things.

Now in Washington, DC, where she works as a scholar, journalist and writer at the Woodrow Wilson International Center, She says Jason's arrest definitely brings back some bad memories.

"The nightmare of 2007, and the 105 days of solitary confinement came like a movie in front of my eyes," she says. "I really started visualizing how surprised [Rezaian] was, how probably frightened he was, and how humiliating it is to be booked into Evin."

The Washignton Post's Ernesto Londono and Willaim Branigin wrote about Iran's reason for making the arrest:

"Gholam-Hossein Esmaili, director general of the Tehran Province Justice Department, told reporters that the 'Washington Post journalist has been detained for some questions and after technical investigations, the judiciary will provide details on the issue,' the official Islamic Republic News Agency (IRNA) reported."

“Iranian security forces are vigilant towards all kind of enemies’ activities, the official added,” IRNA said without elaborating. The brief report did not mention The Post’s correspondent, Jason Rezaian, by name."

It's hard to read this and then compare it to his Twitter feed. His final post on Twitter was a retweet of his recent story on baseball.

Not exactly controversial stuff. And earlier in the year he and his wife hosted Chef Anthony Bourdain, in the country to film a segment for his CNN show, "Parts Unknown."

But that doesn't matter to those who make the arrests. Esfandiari says she was arrested for working at a think-tank in Washington, DC. That was enough for Iranian officials to suspect her of being a spy.

The bad news, she says, is the journalists are most likely being interrogated. She says that's the worst part. She says her interrogations lasted eight to nine hours a day. But she says that given what Rezaian has written, he can defend every word. He doesn't have anything to hide. But it will be tough.

"He has to be strong," she says. "And do what his common sense tells him to do."