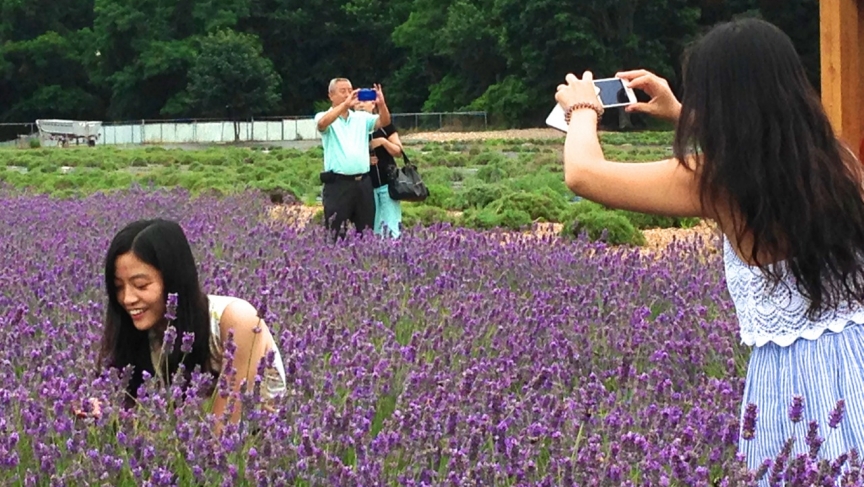 Asian tourists visit the Lavender by the Bay farm on Long Island
Credit:

Lavender by the Bay is a busy place on a Saturday in mid-summer. It's a farm in East Marion, New York, not far from the tip of Long Island's North Fork.

Bees abound, buzzing away in the flowers, paying no attention to human visitors.

Lavender by the Bay is the work of Serge Rosenbaum and his family. Rosenbaum grew up in Paris. Not Provence, but he still knows a thing or two about the popularity of the French variety of lavender.

When he turned 18, he moved to Israel to live on a kibbutz, where he picked up some useful farming techniques.

Later, he married an American, Susan, and together they moved to the US.

"We bought a house in the neighborhood, on a dune. Nothing was growing," Rosenbaum says. "And because I know drip irrigation, I put some plants — because I'm from France, lavender plants — with the drip system and it worked fabulous. So I said to my wife, 'well, you know it's nice.'"

"They said 'leave us alone with your lavender, we don't want any more,'" Rosenbaum says. "So we put a small bench in front of the house, with 'lavender for sale'. We went to the beach, we came back, and there was plenty of money in the pot. I said to my wife, 'something's cooking.'"

So a decade ago, Rosenbaum and his wife bought this farm. Their 17 acres are now home to some 60,000 lavender plants.

"My goal is to start exporting to France," he says with a laugh.

As it turns out, there's a pretty healthy market for lavender right here in the US, but the main interest seems to be coming from Asians and Asian Americans. Most of the visitors to Lavender by the Bay are Asian: Chinese, Korean, people from Hong Kong, and some from Japan, as well as a healthy dose of Americans with Asian roots.

They wander through the fields, mostly taking and posing for photos.

"I think this flower stands for romantic things for Chinese, for Asians. The Chinese love France, Europe, that kind of romance," says Sing Sing, who is from China but currently lives in New York.

"I love this flower. And especially my sister, she loves this kind of flower," Sing says. "She just went to Hungary on purpose to see these flowers and to buy lavender honey."

Lavender by the Bay is a family affair. Rosenbaum and his son, Chanan, who also spends time working at the farm, think they know why so many Asians are stopping by.

"What I hear is there's a movie, a Chinese movie called 'Lavender,' and it takes place in Provence and it's a love story," Chanan says.

Serge Rosenbaum thinks it was a movie that came out in 2001. "It's like a Romeo and Juliet story," he says. "The guy died in the lavender field, and it's very romantic to women — that's why they're very attracted to the lavender, and they take pictures in the field. That's the reason."

Other Asian visitors to the Serge's farm also mentioned a lavender movie from Hong Kong, and a Taiwanese TV series, also called 'Lavender.' (There's a lot of lavender-scented romance on film, it seems.)

"Who knew?" says Serge Rosenbaum. "It's wonderful. We did the farm without any thought about the Asian community, and it's clicked. It's amazing."

Another young Chinese couple were taking pictures amid the lavender.

Zemie and Sherry live in Queens, New York. She works in a beauty salon, and he's a computer science student.

Zemie was wearing a suit. Sherry had on a white dress. Their baby was asleep in a nearby crib.

"The baby's 2 months old, so we just want to remember this point," he says.

I ask the baby's name.

"Elsa," Zemie replies. "Like the queen in the Disney movie, Frozen."

There you have it.

France and its romantic lavender may win the day. But it seems America's Disney is still winning the war.