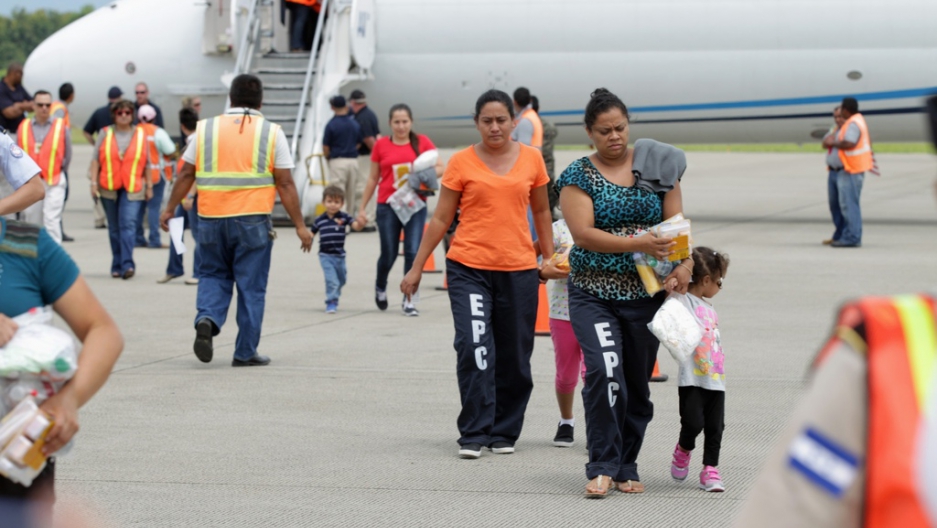 Women and their children walk on the tarmac after being deported from the US at the airport in San Pedro Sula, Honduras.
Credit: Honduran presidential house
Share

CORINTO, Honduras — Clad in flak jackets and bearing automatic rifles and side arms, elite forces are scouring the ragged countryside that straddles this border between Honduras and Guatemala.

The officers are used to fighting heavily armed drug cartels and murderous “mara” street gangs. But now they have a new mission: trying to stop the flow of children who are fleeing the country for the United States by the thousands.

“Honduras is not a prison. This is not an arrest operation. It is more a mission of rescue and information,” says Capt. Miguel Martinez, of the Honduran national police’s version of a SWAT unit, which is leading the campaign.

“We are not going to handcuff a child, or a person that is crossing. We identify coyotes [human smugglers], rescue children, give children medical help, give them food and take them to the city to child support facilities.”

Also backed by militarized units of the Honduran police known as Cobras and Tigers, the operation comes amid rising heat over the migrant issue.

The presidents of Honduras, Guatemala and El Salvador will meet with President Barack Obama on Friday to discuss solutions, which could include new aid packages to help Central America keep its children at home.

Mexico has also mobilized federal police and soldiers to round up undocumented Central Americans passing through its territory.

More from GlobalPost: These are the women helping child migrants make their way to the US (VIDEO)

But while Honduran migrants are used to dodging Mexican and US forces, it is a new obstacle having to avoid their own police.

“Why are they trying to stop us?” asks Osman, a 16-year-old migrant who was recently caught in Mexico and bused back to the Honduran city of San Pedro Sula. “I am just trying to survive. There is nothing for me here. My mom is in Miami and I haven’t seen her for four years.”

Like many Honduran minors, Osman cites violence, poverty and a separated family as his motives to head to “El Norte,” the north. He says he’d like to go to school there and perhaps join the US Army when he is old enough.

However, Capt. Martinez said children are only allowed to leave the country if they have a passport and are accompanied by both parents — or one parent with the signed authorization of the other.

That effectively counts out the vast majority heading northward. Some like Osman are traveling unaccompanied, with their parents already in the US. Others are traveling with their mothers but have little contact with their fathers.

In other cases, children are traveling with an uncle, cousin or with a family friend. Martinez said this is illegal and those taking minors who aren’t their direct children out of the country could face up to three years in prison.

The Honduran city of San Pedro Sula was the top sender of unaccompanied child migrants caught in the US from January to May. (Screengrab of Homeland Security report via Adam Isacson. PDF here.)

Some parents even entrust young children directly to the coyotes, paying them between $5,000 and $7,000 to deliver them from Honduras to the US.

“This is the worst thing that a parent could do,” Martinez says. “We all know the problems that Honduras has — poverty, lack of jobs, crime. But this is not an excuse to send your child with somebody unknown to the United States, a journey that could last from one to five months. People come to me and say they gave their little girl to some coyote called Mario and after five months she hasn’t arrived and he doesn’t answer his phone. What could have happened? She could be a sex slave or in child prostitution. I wouldn’t rule out organ trafficking, or she could be buried in the desert in Mexico.”

Martinez said his officers found an 8-month-old whom the smugglers abandoned on a path when the authorities approached.

In total, officers have picked up 103 minors since Rescue Angels launched in late June, Martinez says. The main roads and much of the countryside around them have now been secured, he says.

US officials said this week that daily detentions of minors at the border have recently reduced. That could indicate Honduras’ effort and others like it in Central American countries and Mexico are having an impact, but it’s difficult to tell.

However, the Honduran captain concedes that in the cat-and-mouse game of border security, smugglers and migrants will simply look for new routes. One way is on boats through the Gulf of Honduras, another through mountainous jungles in more remote areas.

Hector Espinal, the Honduras spokesman for the United Nations children’s agency, UNICEF, says the government is within its rights to enforce its laws on the movement of children. However, he said that it is only a Band-Aid that could temporarily reduce the flow but won't address root causes of the emigration wave.

“The governments in Central America need to wake up now to this crisis,” Espinal said. “They need to work harder to reduce the violence here. If they don’t, then more children will be going north, however many police and soldiers are in their path.”