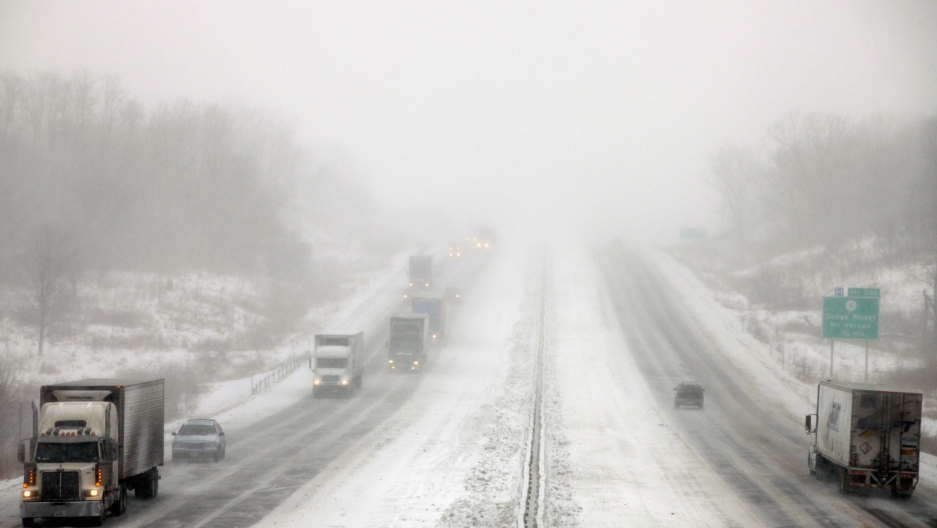 A multiple-car pileup in Maine was the latest in a series of road incidents caused by the snowstorm Nemo that has affected the northeast US and Canada.
Credit: Chip Somodevilla
Share

A new report released by the World Meteorological Organization catalogs the economic damage from extreme weather conditions all over the world. The WMO survey looked at climate events from 1970 to 2012. Here are a couple graphics that sum up the economic cost to North America, Central America, and the Caribbean. Storms are the most common environmental disaster in North America, Central America, and the Caribbean. Out of the 1,631 disasters identified in the region between 1970 and 2012, storms accounted for 55 percent of them, according to the WMO. While they may be just over half of the disasters catalogued, storms accounted for 79 percent of the economic losses from climate events between 1970 and 2012. That's a whopping $796.72 billion.

It is important to note that all of the economic losses listed above are identified by the WMO as occuring in the United States. Essentially, the United States loses the most money when extreme climate events occur (WMO says this is mainly because there's more expensive things to damage than other regions in the area). It's also interesting to note that Canada, for which the same logic could be applied, doesn't make an appearance in the top 10. Canada, it seems, has substantially fewer extreme weather events than the United States. Since 1970, the United States has dealt with 691 disasters, Canada has only had 93. Our neighbors to the north did suffer from some of the same storms we did, being pummeled by a few Nor'easters in 2013.

But economic losses aren't the only way to measure the cost of an extreme climate event. When you rank disasters by reported deaths (instead of reported economic losses), a very different picture emerges, the United States is no longer the nation that suffers the most.