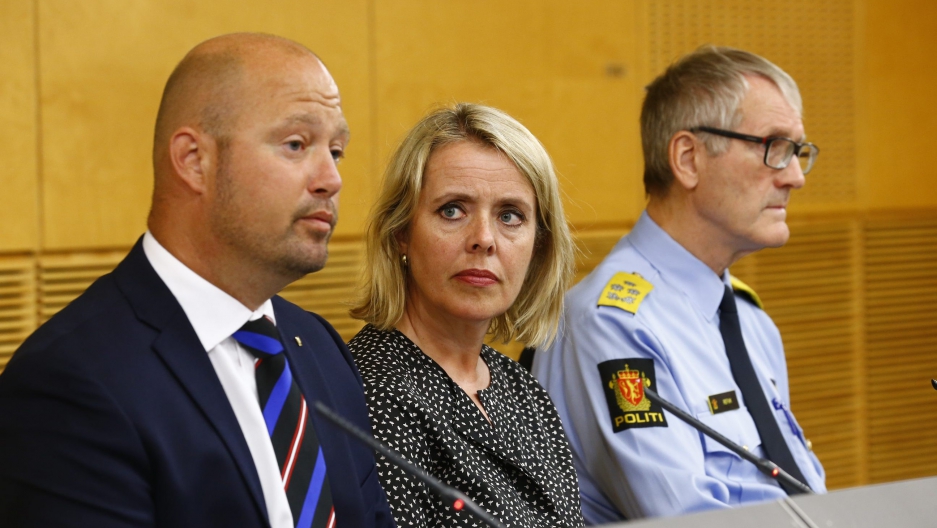 Minister of Justice and Public Security, Anders Anundsen (L), the head of the Norwegian intelligence service, Benedicte Bjoernland, and head of the police Vidar Refvik. Norway has taken exceptional security measures after being informed of a possible imminent 'terrorist' attack by militants who have fought in Syria, the country's intelligence chief said Thursday.
Credit: Heiko Junge
Share

Norway is preparing for a possible Syria-linked terrorist attack. Benedicte Bjoernland, head of Norway's intelligence service, announced at a press conference this morning that the agency has received "'reliable information' about plans for some kind of attack 'within days,'" linked to jihadists in Syria. This is the sort of threat many Western countries have recently been worried might come out of Syria eventually. Norway is beefing up its airport and border security in response to the threat.

The media are all over Israel and Gaza right now, even as far higher numbers of fatalities accumulate in Syria. Why is that, asked Jeffrey Goldberg yesterday over at The Atlantic? Here's the theory he comes up with, after soliciting an opinion from Al-Hayat's Washington bureau chief Joyce Karam as well:

I can spend all day speculating, but one explanation for this lack of coverage is a relative lack of interest in the Syria/Iraq theater by Arabs and Muslims, or at least relative lack of interest in comparison to the obvious interest in the Gaza crisis. The American media takes at least some of its cues on Syria from the intensity of coverage in the Arab world. ... The Muslim world does seem more interested in Arabs who are killed by Jews than Arabs killed by Arabs ...

As if on cue, later Wednesday the BBC published a piece from Istanbul observing that "the people of Syria continue to die in greater numbers than anyone can accurately count." The piece offered an update on the weak international efforts to do something about it.

A Syrian boy sits looking at a body wrapped in a shroud following an air strike by a government forces helicopter on July 21, 2014, in the northern city of Aleppo. (Zein al-Rifai/AFP/Getty Images)

The New York Times has a reporter inside the territory held by the Islamic State. Head on over to read about what life is currently like in the Syrian city of Raqqa. Even with the reporter's name being witheld for security reasons, reporting at all from Syria, let alone IS-held territory, is extremely risky.