Faldila scoops up a batter for fried spinach fritters, called dalchi, while her daughter watches in the kitchen.
Credit:

Muslim families around the world this month are observing the holy month of Ramadan. In Bo-Kaap, a vibrant, historic neighborhood in Cape Town, South Africa, the majority of residents are Muslim.

For the past month, families and friends have been gathering at sundown to break the fast in true South African-style.

Faldila Abrahams, wearing a light pink apron over her dark red full-length robe and matching head wrap, is grating carrots, and chopping cilantro and spinach for a big pot of lentil soup.

“I’m just adding a little bit more water ‘cause it’s fairly thick. I think I should add the other carrot as well — make it a nice, lighter shade.”

Then, she turns her attention to a bowl of batter that will become plump fritters. She scoops spoonfuls into hot bubbling oil.

This Ramadan break-fast feast is a blend of cuisines and cultures.

“I’m born and bred in Cape Town, and my mother was born in Cape Town,” says Faldila. “My great-grandfather is from Yemen and my great-grandmother is from England. My granny married a man [whose] family came from Java. So, it’s all just a mixture of different cultures.”

Faldila’s husband also has roots in Indonesia. For generations, Muslim families have called this part of Cape Town home. Many are descendants of slaves that the Dutch brought here from Indonesia in the 16th and 17th centuries. During the Apartheid era, the community got the name “Cape Malay.” 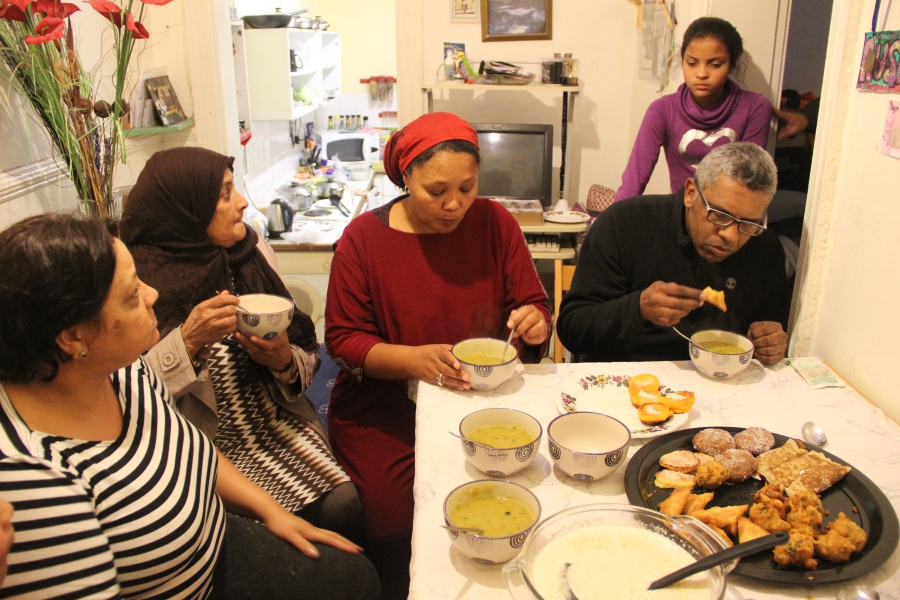 As sunset nears, Faldila is making some traditional Cape Malay dishes, including dalchi, which are Malay spinach fritters, and my favorite, Indian samosas.

The last day of Ramadan will be the busiest for Faldila.

“I never sleep the night before Eid. It’s actually 12 to 16 hours that I will cook non-stop,” she says.

Neighbors and relatives stop by Faldila’s kitchen and leave parcels of sweets, while she sends her 10-year-old daughter, Rushana, to deliver packets of fritters to the neighbors.

“Bo-Kaap is like a whole big family,” Faldila says. “Now, with our Ramadan, the neighbors exchange little sweetmeats, savories, and this goes on for 29 days."

As sundown approaches, the call to prayer echoes through Bo-Kaap, signaling that it’s time to break the fast. The adults sit around a small table and chat, mostly in Afrikaans. Faldila switches in and out of English, especially when talking to the kids.

Faldila’s children attend schools outside the Muslim quarter, but she says she hopes they’ll hold onto their Islamic faith.

“All that you were taught as a child, you try to pass it on to your kids. If you have your religion, it’s like somewhere where you can belong.”

Soon, it’s time for the evening prayers at the mosque. Faldila heads back into the kitchen to prepare a late-evening supper, as well as meals for the next day.