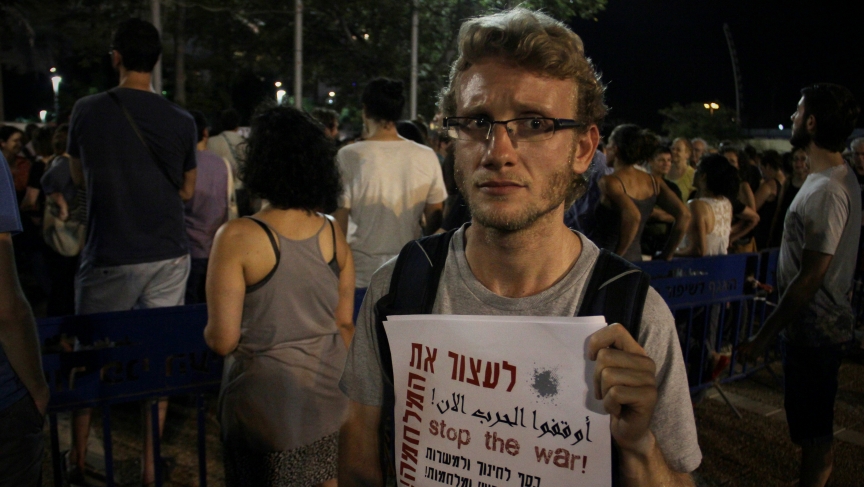 Israeli Yasha Marmer protests against his country’s operation in the Gaza Strip, holding a poster that says “stop the war” in Hebrew, Arabic and English.
Credit:

In a square in central Tel Aviv, a young Israeli woman wrapped in a Palestinian keffiyeh reads the names of those killed this week by Israeli strikes on the Gaza Strip.

It's part of an anti-war demonstration, calling for a halt to attacks on Gaza and the end of Israel's occupation of the Palestinian territories. Yasha Marmer is among the crowd at the protest, holding a poster that says “Stop The War” in Hebrew, Arabic and English.

“We are here to protest the massacre in Gaza,” he says. “To say the madness of [Israeli Prime Minster] Netanyahu’s government has nothing to do with the security of the citizens of Israel.”

The protest is taking place in Rabin Square, where former Israeli Prime Minister Yitzhak Rabin was assassinated by a right-wing Jewish extremist for signing a peace accord with Palestinian leader Yasser Arafat. And now, the anti-war activists are again worried about violent backlash.

In the last week, several Israeli anti-war protests were attacked by angry mobs, resulting in injuries and arrests.

“I didn’t come for, I don’t know, three of five demo[nstration]s that took place recently because I was afraid,” says Rotem Malenky, a 35-year-old filmmaker. He's the only one person at the protest holding an Israeli flag. “We’ve never seen violence in such scale toward Jews. Toward Arabs there was a lot violence. But toward Jews it’s kind of new.”

The angry counter-protesters are here again tonight. A group of pro-war Israelis start yelling from the crowd. One of them runs to the microphone and tries to take it from the hand of an activist before police rush in and remove him.

On another night in the mixed Jewish-Arab neighborhood of Jaffa, 500 police officers surround a protest in a park. Right-wing activists on Facebook called for attacks on the demonstration and, sure enough, an angry crowd tries to reach the park from a side street.

“We stopped them a few hundred meters from here,” says Sami Dziubas, an Israeli police spokesperson at the scene. A video posted by an Israeli journalist shows the blocked mob jumping up and down with Israeli flags and chanting “Death To Arabs.”

Death threats are now also directed at Jewish Israelis who speak out against their military’s actions. Activists say they are often threatened in Facebook messages and emails, too.

“[They are] saying ‘you should die, you’re traitor, you should be raped by Palestinians' — that’s very common,” says Maayan Dak from Israel’s Coalition of Women for Peace. She and many of their members have been threatened and even been physically attacked in protests. “We were attacked last week severely, and in the center of Tel Aviv. It’s the first time I’ve seen anything like it. It became legitimate to attack people. And it became like heroic.”

Israeli politicians have condemned the attacks, but not necessarily the sentiment. Regardless, Israeli activists say they will not be silenced, fueled by what most feel is their responsibility to speak out. Rotem Malenky, the protester in Rabin Square, says as the death toll rises in Gaza it’s his obligation to be here.

“I have the power to change things because I am a citizen in a sort of democracy," Malenky says. "Israel is not a real democracy, but it’s near it. As a person that has the privilege of being Jewish in the Jewish state, being male ... I have most of the privileges an Israeli can have, so I need to let my voice be heard.”