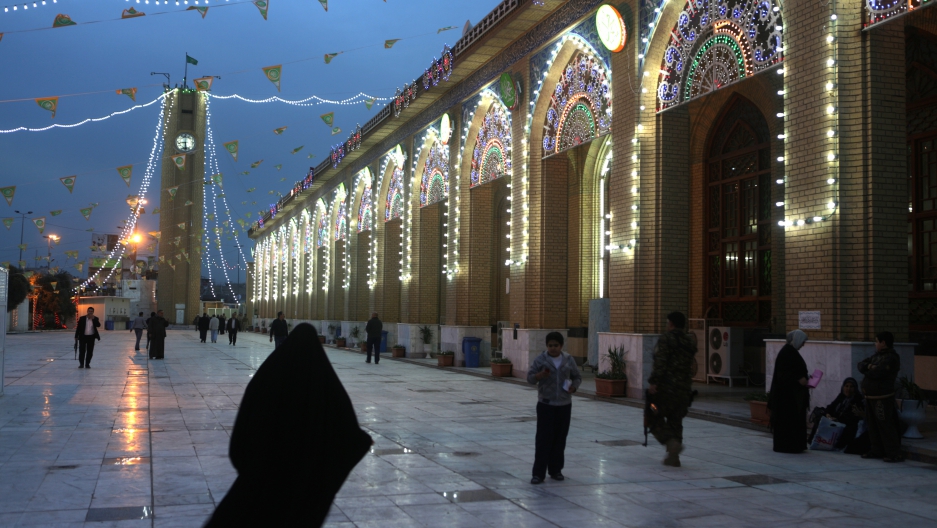 A view of the Abu Hanifa mosque in the Sunni neighborhood of Adhamiya in Baghdad.
Credit: Patrick Baz
Share

BAGHDAD, Iraq — Talk to any young man in Baghdad's mostly Sunni neighborhood of Adhamiya and you'll hear the same story: as tensions have risen over the past month, their friends have fled.

"They've all left!" laughs Ra'id, a recently married 28-year-old man from Adhamiya. Sitting in a bright cafe during the busy nighttime hours of Islam's holy month of Ramadan, he shakes his head. He's now trying to leave, too.

A few weeks ago, Ra'id recounts, he was driving not too far from here with his parents when a fighter from the powerful Shia militia Asa'ib alHaq stopped the car.

Since Shia militias began mobilizing to ward off the advance of Sunni militants on the Iraqi capital, Baghdad's Sunnis say they're feeling increasingly trapped. Many, like Ra'id, are trying to flee.

The exodus is further homogenizing the once diverse capital city, resuming demographic shifts first put into motion following the US-led invasion in 2003 when Saddam Hussein’s Sunni-led government was toppled, bringing Shia politicians to power. Before 2003, most of the city's neighborhoods were home to both Sunnis and Shia. But within just a few years mixed neighborhood populations dwindled to just a handful of Sunnis.

"This is not new in the history of Iraq," says Saad Eskander, the director of the Iraqi National Archives in Baghdad, noting that in the early to mid-1900s both Jews and Christians existed in large numbers in the capital. In the city's more recent history, Eskander explained that former Iraqi leader Saddam Hussein attempted to boost the capital's Sunni population by bringing in large numbers of Iraqi Sunnis from the country's west.

"I think in the back of their minds, both communities Sunni and Shia think the battle for Iraq will be over Baghdad," Eskander says. "Baghdad is the prize."

Adhamiya, where Ra'id is from, is one of the Iraqi capital's oldest neighborhoods, and like most of the rest of the city, it was once home to both Muslim sects. Long a center of learning, its residents still pride themselves on their history of both intellectualism and tolerance.

But the neighborhood's more recent history has been defined by violence and strife. Following the US invasion of Iraq, a string of abductions and killings in Adhamiya suspected to be at the hands of Shia militias ignited sectarian tensions. Shortly afterward, the predecessor of the Islamic State (IS), the radical Sunni group Al Qaeda in Iraq, moved in to secure the area as a stronghold. Under Al Qaeda rule, almost all of the Shia residents fled, turning the once mixed district into a nearly homogenous enclave.

From PRI: A Sunni man in Baghdad says his life is 'like the walking dead'

"I was so upset when Al Qaeda forced the Shia out of here," he says between drags off a water pipe, "we liked them, they were our neighbors."

At nearly 80 years old, Ahmed Hassan al Taha, the Imam of Abu Hanifa Mosque, a prominent Adhamiya landmark, says he can still remember the days when talking about sect in Iraq was taboo.

"It used to be a matter of shame for someone to identify as Sunni or Shia or Kurd," he explained from behind a desk piled high with books. "We used to live in a peaceful way, in a modern way, like the countries outside of Iraq."

He admits that now there are what he describes as isolated incidents of Shia militias abusing their power, but he called the talk of increased sectarian tensions and reports of Sunnis fleeing in large numbers "just propaganda."

"We have a very good relationships as people. Just across the bridge," he said, referring to the predominantly Shia neighborhood of Kadhimiya on the other side of the Tigris River, "you can find the same faces, the same mercy. We are all people of mercy."

But tolerance like this is by no means shared by all in Iraq these days. For many residents, escalating violence that's hitting closer and closer to home is bringing ugly prejudices bubbling to the surface.

"These people, they are not like us," whispers a Sunni woman who asked to be called Um Mariam, indicating a Shia man just across the room.

After one of her neighbors was killed in his own home, she said she decided it was time flee. But because flights out of Baghdad are booked solid for weeks, she's come to the Iraqi Airways office run by the Shia-controlled Transportation Ministry to try to call in a favor.

"Just look at the shape of his face, it's not like us, even the way they eat, just with their hands."

She says most of her family has already fled Baghdad and as soon as she can get a ticket she'll do the same.

"Our future," she says, referring to Baghdad's Sunnis, "it’s finished."

Editor's note: Susannah's reporting from Baghdad is part of a GlobalPost partnership with PRI's The World.