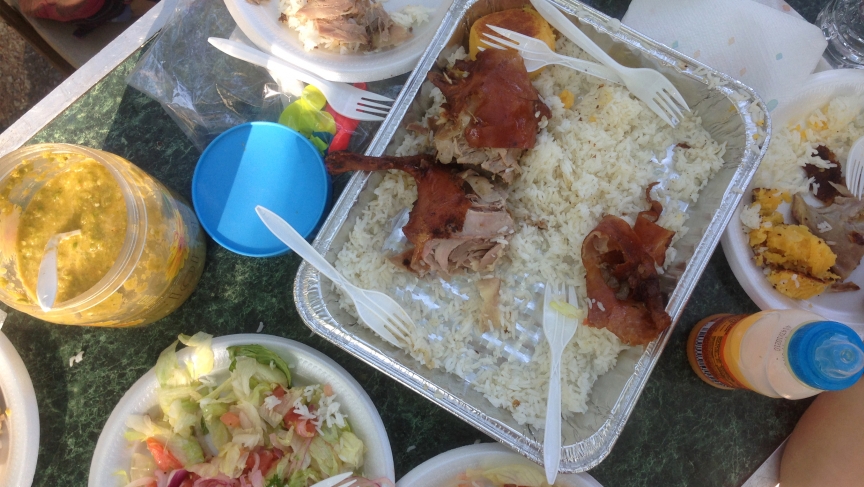 Guinea pig, or "cuy" in Spanish, is served at a food stall on Sundays in a park in Queens, New York City.
Credit:

I headed to a park in Queens, New York, recently with my friend Richie Parra and his two young daughters. They wanted to show me one of their favorite food stalls in the city.

At the far edge of the park, the grill was sizzling. There was a whole pig head roasting, buckets of chili sauce — and several roasted guinea pigs on the grill.

We got one to share and Parra asked his daughter, Adilem, to say guinea pig in Spanish. Cuy, it turns out.

We dug in. “The skin is a little crunchy," Parra said between bites. "I like the skin." Parra’s daughter grabbed off the head and started gnawing on the cheeks. 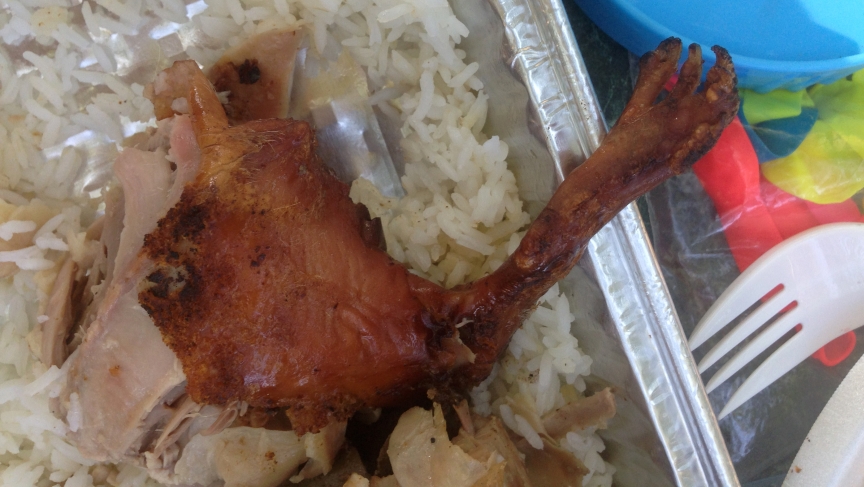 Wildlife conservationists suggest that guinea pig, pictured cooked, is an easy animal to harvest, and has very little impact on the environment, unlike other livestock.
Credit:

I met Parra when I lived in Ecuador years ago. I ate my first guinea pig — a traditional Andean dish — at his brother’s graduation. Then, about 10 years ago, Parra moved to the US. When he gets homesick, his mom will sometimes mail him a package filled with guinea pig meat straight from the family’s yard.

But he also knows where to get his fix in New York.

The food stall we visited is run by Digna, who asked that I not give her last name or her stall’s exact location — none of this is really official. She told me she sells up to 10 guinea pigs on Sundays, with the meat frozen and imported from Ecuador. 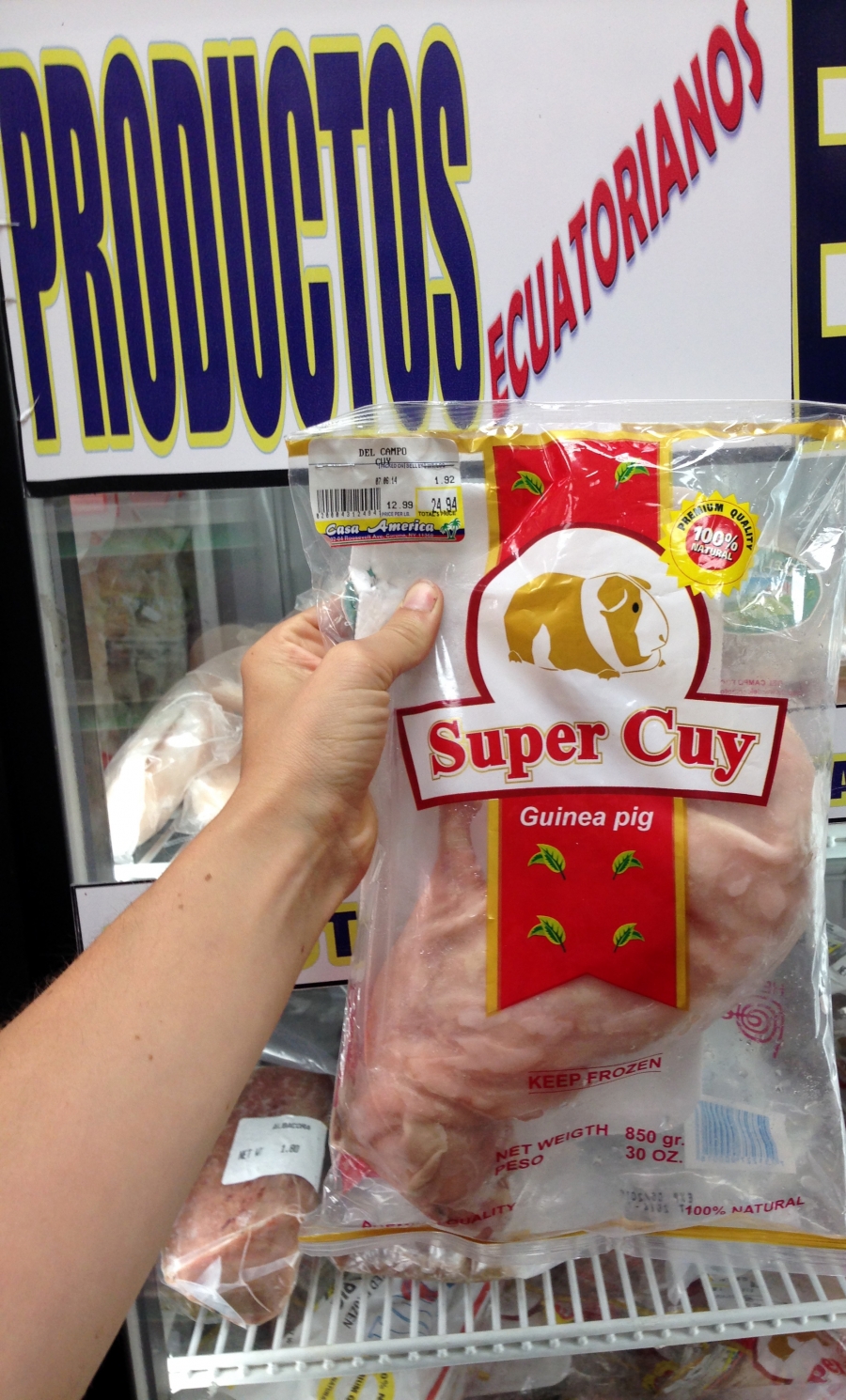 A package of frozen "cuy," or guinea pig meat, is available at certain ethnic food markets. Chef Diego Oka, a Peruvian chef who runs several restaurants in the United States, including La Mar in Miami, says guinea pig meat is very flavorful. "For me, it's a mix of rabbit and duck," he says.
Credit:

I wondered about the legality of all this, if it was as hard to bring in guinea pig meat to the US as, say, certain ham from Spain. What I learned is that federal regulators, at this point, are not tracking guinea pig imports.

Meanwhile, demand is slowly rising in the US. Restaurants in places like New York, Texas and Washington, DC, are planning to put it on the menu.

One chef, Diego Oka, hopes Americans won’t be too squeamish about eating guinea pig. Oka, who is from Peru, runs La Mar, an upscale restaurant with several locations in the US. He has served guinea pig as a special dish on Peruvian Independence Day — July 28 — for the last few years.

“It’s a very flavorful meat,” he said. “For me, it is a mix of rabbit and duck, because it is very greasy. You have a lot of fat.”

Oka prepared cuy for the first time at a posh restaurant in Lima, breaking from tradition and adding a French flair — making a cuy confit. It made it so people didn't feel like they were eating a rodent, which Oka says can turn people off.

“I think that the more shocking part of eating cuy in Peru, traditionally, is watching his face," he said. "But the face is the most delicious part because it’s crispy. It’s like a cracker. The cuy skin is like pork skin.”

There are guinea pig enthusiasts from the US, too. I talked to Charles Kuck, an immigration lawyer in Atlanta. He’s heading to Peru for vacation soon and is looking forward to his favorite dish.

“It is now 32 years ago since the first time I had guinea pig,” Kuck said. “I was living in Cusco, Peru. I had been there about a month and the person I was working with said, ‘We have a treat for you tonight!’ And it was interesting because my first month here, I kept seeing these little guinea pigs in everybody's house, and I kept thinking how nice, they have pets here in Peru. How sweet that is. Then, the first time somebody brought it out, it was roasted. But I have to tell you, it was delicious and since then I’ve eaten it dozens of times." 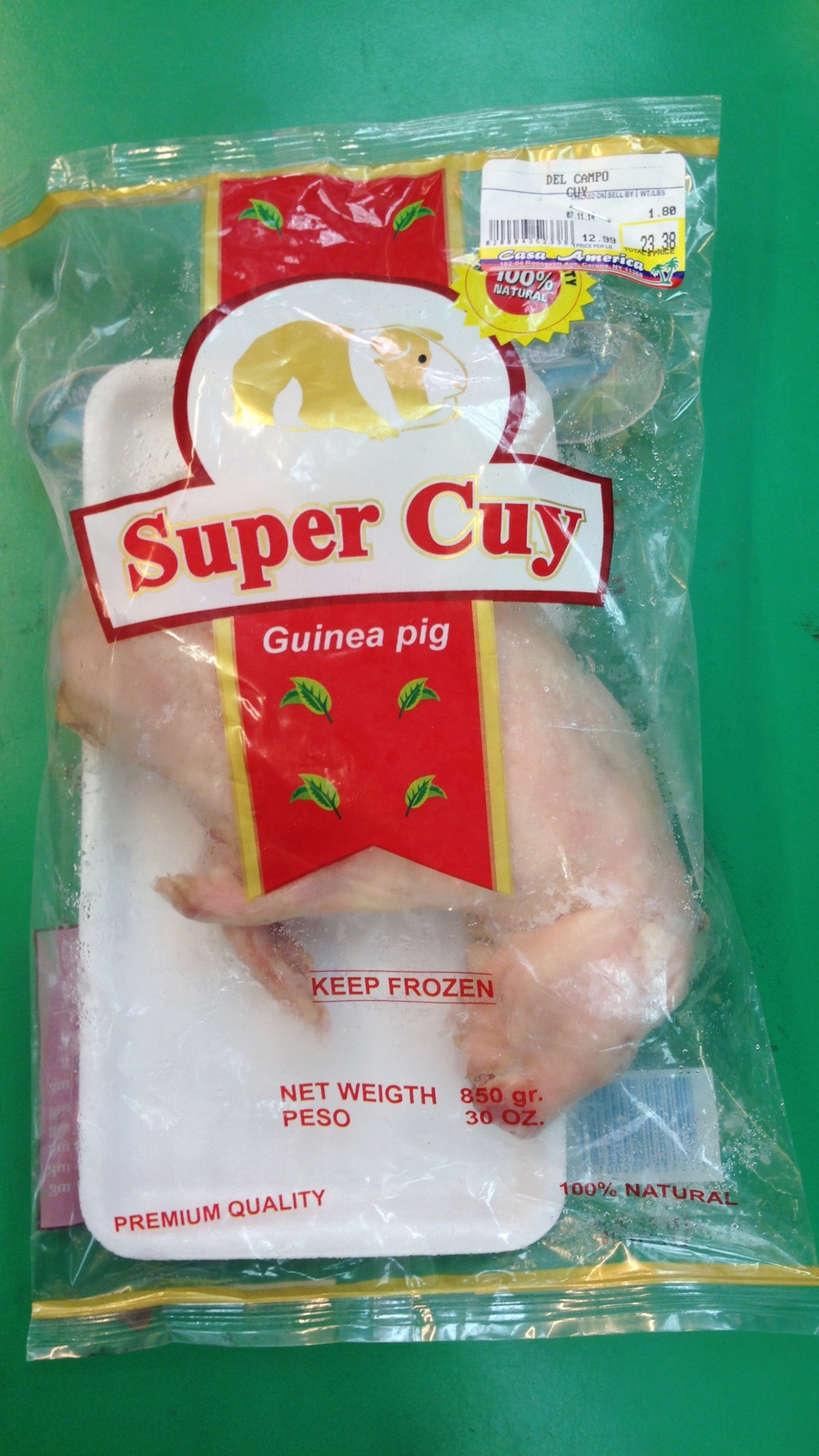 Packaged "cuy" is on sale at an Ecuadorian grocery store in New York City.
Credit:

I agree with Kuck. I find guinea pig pretty tasty. I like the crunchy skin and picking through the bones to get at the rich meat.

But there might be another reason to embrace the guinea pig for dinner. Matt Miller, a wildlife conservationist in the US, said guinea pig is an environmentally-friendly livestock. “The reason that guinea pigs make sense is that you can really raise them with a very small piece of land,” Miller said. “You can even raise them in your home … which obviously you cannot do with cattle.”

Miller also mentioned guinea pig’s cultural significance, something you hear about a lot when it comes to this dish. “If you go into the cathedral in Cuzco, Peru, you will see a picture of the ‘Last Supper,’ with Jesus sitting down to a dinner of guinea pig,” he said.

Now, back to that Sunday afternoon in Queens.

Stuffed, I headed with Parra and his daughters to the subway. On the way, we passed several Ecuadorean restaurants. One offered guinea pig as a lunch special. Another had a large photo of a roasted guinea pig in the window. In a grocery store, frozen cuy was sold for $12.99 a pound.

But Richie says none of the guinea pig here beats what he gets at his mom’s house. Still, he’s happy to show his daughters, who’ve never been to Ecuador, a taste from home right here in New York.