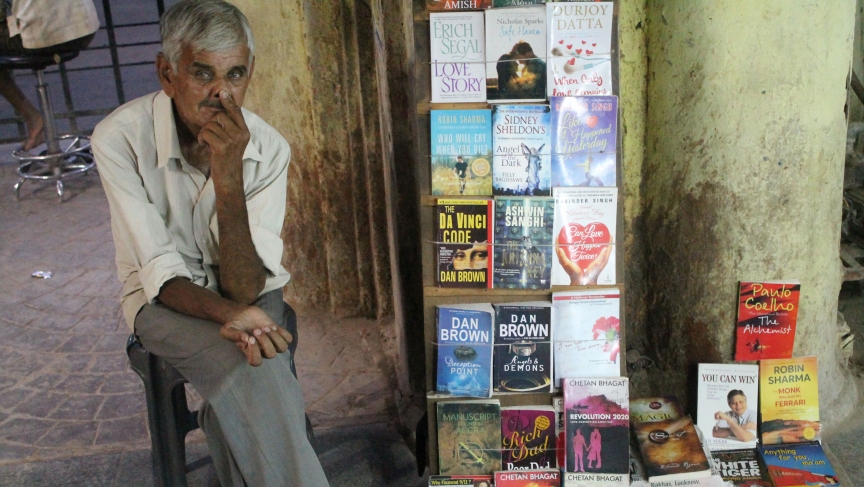 I tried to buy a Hindi book in Lucknow, but they're not that easy to find. Most of the books for sale seem to be English titles.
Credit:

I have been living in the US for 11 years, most recently in South Bend, Indiana, so I speak and hear English all the time. But I often crave Hindi, my first language, and one of the official languages of India.

So, this year, before I left America to spend the summer with my family back in India, I promised myself I would only read Hindi language books and speak mostly in Hindi.

It hasn’t been that easy to do.

A few days after I arrived in India, I set out to buy a short story collection by a famous Hindi writer, Munshi Premchand. I went to a well-known bookseller in my hometown, Lucknow, the heartland of the Hindi language, but I learned that it only sells books in English now.

At another bookstore, the shopkeeper pointed out an isolated corner — that’s where they kept their Hindi books.

I bought one and took it to an upscale café next door. But the waiters and the cashier only wanted to communicate in English, no matter how much I tried to speak Hindi.

I took a sip of coffee and opened my book. Just as I started reading, I heard the Miley Cyrus song, “Wrecking Ball,” come on the speakers. I noticed a group of teenage girls a few tables away, singing along, shoulder-dancing.

When I was growing up in India, I went to an English school where students were fined for speaking in Hindi. Flunking Hindi class was almost a matter of pride. My parents wanted me to be fluent in English, because it came with the promise of a good career, wealth and status.

Now, India’s new Prime Minister, the Hindu nationalist Narendra Modi, wants civil servants to use Hindi instead of English. They’ve even been urged to communicate in Hindi on Twitter, Facebook and other social media.

I finished my coffee and walked out of the café, thinking, “Where am I going to find someone who won’t speak in English?”

Maybe I should ask the prime minister.