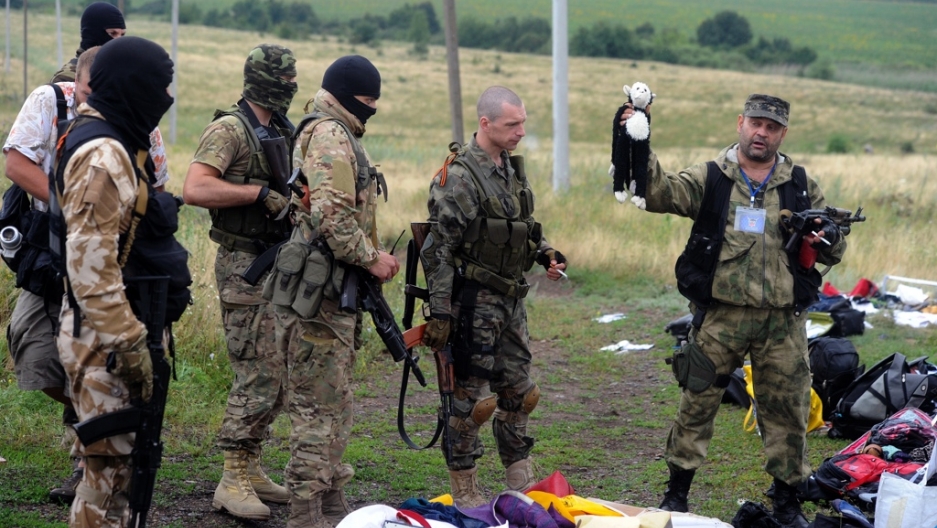 A pro-Russia militant holds up a stuffed animal at the site of the crash of a Malaysian airliner carrying 298 people from Amsterdam to Kuala Lumpur in rebel-held east Ukraine on July 18.
Credit: Dominique Faget
Share

Putin denies it, pro-Russian separatists are covering it up, and internet trolls are scrubbing Wikipedia, but the evidence is mounting that the separatists are the ones who shot down Malaysia Airlines Flight 17. And they needed help to do it.

US Secretary of State John Kerry made the talk show rounds on Sunday to present evidence that MH17 was shot down by pro-Russian separatists, a claim the US State Deparment made in an official statement released Saturday, July 19.

More from GlobalPost: 8 things you should know about Igor Girkin, the Ukraine separatist leader

Russia hit back on Monday, when the Russian Ambassador to Malaysia, Lyudmila Vorobyeva called the accusasions "groundless."

"There have been a lot of accusations and finger pointing towards Russia," she said. "The US claims they have evidence of what happened. where is this evidence?"

So what's the evidence that has Kerry and the State Department convinced? Here's everything we've got so far.

1) The Buk missile system itself Everyone is pretty convinced by now that MH17 was shot down by a Russian-made SA-11 surface-to-air missile system, also known as a "Buk."

As the State Department put it in its July 19 statement: MH17 was "likely downed by a SA-11 surface-to-air missile from separatist-controlled territory in eastern Ukraine."

That leaves the pro-Russian separatist rebels. When you consider the fact that there had recently been what Kerry called a "major flow of arms and weapons from Russia to the eastern part of Ukraine and turned over to the separatists," it's easy to guess where the "Buk" came from.

"It's pretty clear that this is a system that was transferred from Russia," Kerry said.

That makes sense. But there's more than just common sense to suggest it's true. A pro-Russia militant holds up a stuffed animal at the site of the crash of a Malaysian airliner carrying 298 people from Amsterdam to Kuala Lumpur in rebel-held east Ukraine on July 18.

As Kerry and the State Department note, we've got pro-Russian separatists on tape talking about the Buk missile system, shooting down planes (including MH17), and getting flight data recorders to Moscow.

The Security Service of Ukraine (SBU) has released three separate audio recordings of intercepted phone conversations among Russian military intelligence officers and pro-Russian separatist fighters. The US State Department confirmed the authenticity of the first two of three audio recordings.

The SBU released the first set of intercepted conversations shortly after the plane crash on July 17. It includes three separate conversations in which separatists discuss shooting down a passenger plane. Two of the voices are Igor Bezler and Vasili Geranin, both alleged Russian intelligence officers.

The next day, SBU released conversations intercepted in the days leading up to the crash, in which separatist rebels discuss the BUK missile system.

Most recently, the SBU released audio — not authenticated yet — in which separatists discuss the MH17 crash site and indicate that Moscow is requesting the flight data recorder (black box). The State Department also referred in its statement to several photos and videos posted to social media around the time of the crash that appear to depict the following things:

1. A Buk missile system traveling through separatist-controlled town of Snizhne, which is located a little more than 10 miles from the MH17 crash site.

2. A Buk stationed in the nearby town of Torez. 3. A Buk being transported aboard a truck, apparently heading toward the Russian border. The Ukrainian Ministry of Internal Affairs posted the video on July 18. Note that the Buk appears to be missing a rocket.

The images and videos have been collected and authenticated by Bellingcat, an open source community of citizen investigative journalists. GlobalPost can't independently authenticate them, but apparently the US State Department thinks they're authentic enough to mention in its statement. Commander and self-proclaimed Defense Minister of the so-called "Donetsk People's Republic," Igor Girkin walks with his bodyguards in the eastern Ukrainian city of Donetsk.(AFP/Getty Images)

The State Department also pointed out that pro-Russian separatists had posted some things on the internet that they definitely, immediately wished they hadn't. (They're just like us!) Shortly after MH17 crashed, rebel fighters announced on social media that they'd shot down a Ukrainian An-26 military transport plane. That plane may have turned out to be MH17.

Strelkov deleted the post, but, as you'd expect, not before someone else took a screenshot.