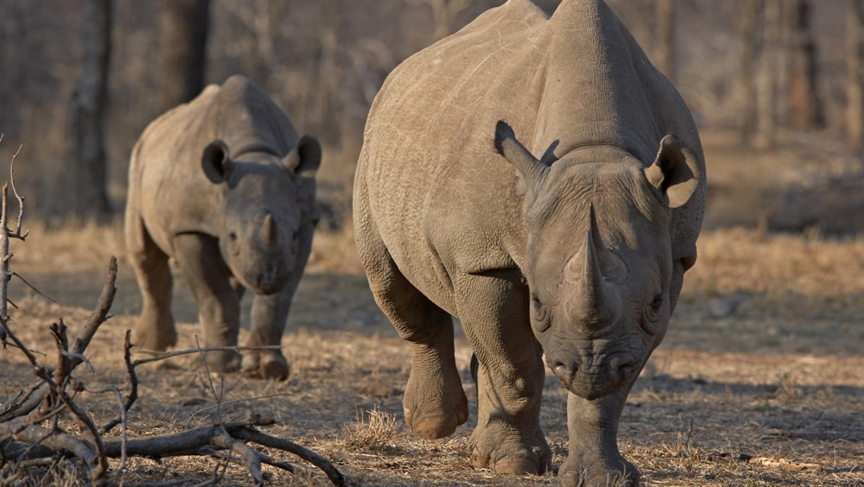 The rhinoceros population in Africa is under siege.

Rhino horns, which are worth a fortune in Asian markets, tempt poachers into hunting down the huge animals — 1,004 rhinos in South Africa alone last year. Most of the killings happened in Kruger National Park, the largest game reserve in the country and a popular tourist destination.

Now, to protect the rhinos, park officials say they are considering evacuating some of them to other reserves. But Cathy Dean, director of Save the Rhino International, a conservation organization based in London, says the highly-publicized rhino move is missing the point.

The root of the problem actually lies next door in Mozambique, she argues.

"Kruger National Park has a particular geographical problem," Dean says. The eastern side of the park shares a border with Mozambique, which has been wracked by poverty and corruption since the end of its civil war in 1992. Impoverished Mozambican men see poaching as one of the few options available to support their families.

The park was once separated from Mozambique by a fence, but the barriers were taken down a few years ago to allow animals to roam freely across the land.

"At the moment, South African rangers are not allowed to chase [poachers] across the border," Dean says. "They have to stop at that invisible line."

Poaching rates have increased dramatically in the past few years. There were 668 attacks last year, up from only 13 in 2007. Part of the increase is due to a spike in demand in Vietnam, where the economy is booming and rhino horns are ground up as medicine or displayed as status symbols in homes.

Based on current poaching rates, and without further intervention, Dean calculates rhinos would go extinct in South Africa by 2026. Park officials would be forced to keep the rhinos in caged areas to keep them from extinction.

"It won't be everybody's fantasy of what wildlife in Africa looks like," she says. "It's not what we want."