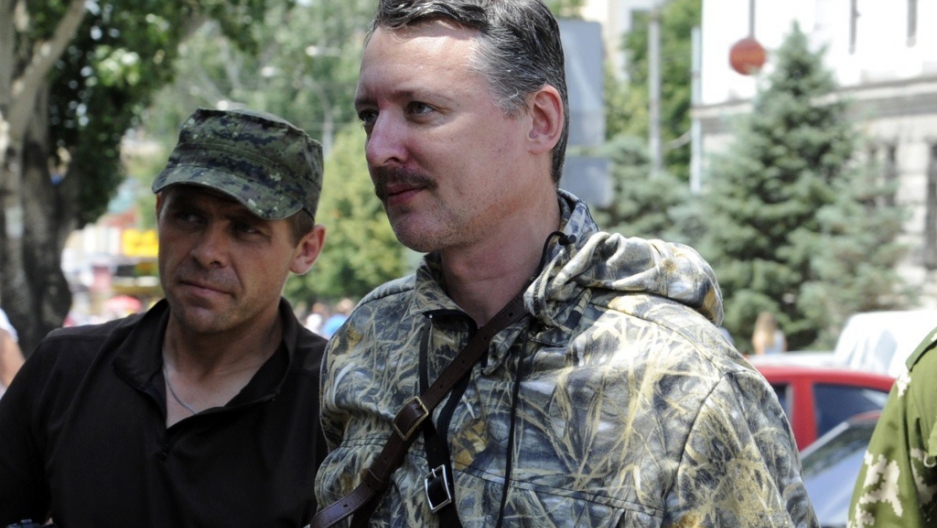 In the aftermath of the Malaysia Airlines Flight 17 tragedy, the world's attention turned again to eastern Ukraine, the crash site where pro-Moscow separatists are fighting government forces. Much of the scrutiny has fallen on the rebels' leader, Igor Girkin, especially since he reportedly bragged about shooting down a Ukrainian aircraft at the same time and near the same place where MH17 went down. (The separatists also didn't help their cause when they blocked crash investigators from the site, took the aircraft's black boxes and looted the debris.)

So who exactly is this guy? Here are eight things you need to know about the man who's leading the separatists in Ukraine.

On July 18, a pro-separatist website reported that Girkin had accused Ukrainian authorities of stashing already deceased bodies on the flight. "A significant number of the bodies weren't fresh," the site, Russkaya Vesna, quoted Girkin as saying. "Ukrainian authorities are capable of any baseness." He went on to say that he couldn't confirm the information, but that many of the victims smelled as though they'd been decomposing for a while.

2. He often goes by another name.

Girkin's nom de guerre is Igor Strelkov, which loosely translates to "rifleman" in Russian. Leaflets circulated around mid-May in the separatist stronghold of Donetsk referred to him as Colonel Igor Strelkov and noted that he was in charge of the rebel operations in eastern Ukraine. He may even go by a third name, Strelok, which is also a gun-related nickname.

The fighting in Ukraine isn't Girkin's first combat experience. He's a veteran of both the Russian and Soviet armies and has seen action in Serbia, Chechnya and Transnistria, a Russian-backed breakaway state in Moldova. He was also reportedly seen in Crimea during the time Russia annexed the territory. Stella Khorosheva, a spokeswoman for the separatists, says he "has rich military experience."

It's been widely reported that Girkin, who was born in 1970, is an avid military history buff to the point that he dresses up in costume for re-enactments. There are pictures of him on the Internet wearing medieval armor and uniforms from the World War I era. He also belongs to a club called Markovtsy, a group dedicated to re-enactments that was named after a Russian general killed by the Bolsheviks.

5. It's not clear what his ties to Russia are.

Ukranian intelligence authorities say Girkin, who is from Moscow, is a top-level covert Russian operative. The United States has accused Russia of sending "a steady flow of support" to Girkin's operation. The Russian media, however, says that he served with the Russian Federal Security Service, the country's internal security and counterintelligence unit, but has long since retired. He and his supporters maintain that they have no ties to Russia, and that Putin's government hasn't given them a single gun or piece of military hardware.

6. He believes Russia should be doing more to help his cause.

To whatever extent Russia is involved in stoking bloodshed in eastern Ukraine, Girkin believes the government should take a more hands on approach to the conflict. He wants Putin's army to invade and return eastern Ukraine, which the separatists refer to as "Novorossiya," to its rightful place as part of Russia.

7. He dislikes the West.

It may not come as a surprise to learn that Girkin has expressed strong anti-Western sentiments, deeming those societies "decadent." Girkin reportedly has a deep interest in the history of his country and wants to instigate the re-establishment of the Russian empire as a counterbalance to the West.

8. He has been sanctioned by the European Union.

The EU has imposed sanctions on dozens of high-ranking Russian military officers and pro-Russian separatists as the crisis in Ukraine continues unabated. Girkin was added to that inauspicious list in April because European officials believe he is on the staff of Russia's GRU, or it's military intelligence agency, and is behind much of the fighting in eastern Ukraine. European leaders also cited him for advising Sergey Aksyonov, the de facto prime minister of Crimea.

More from GlobalPost: Here's all the evidence (so far) that pro-Russian separatists shot down MH17