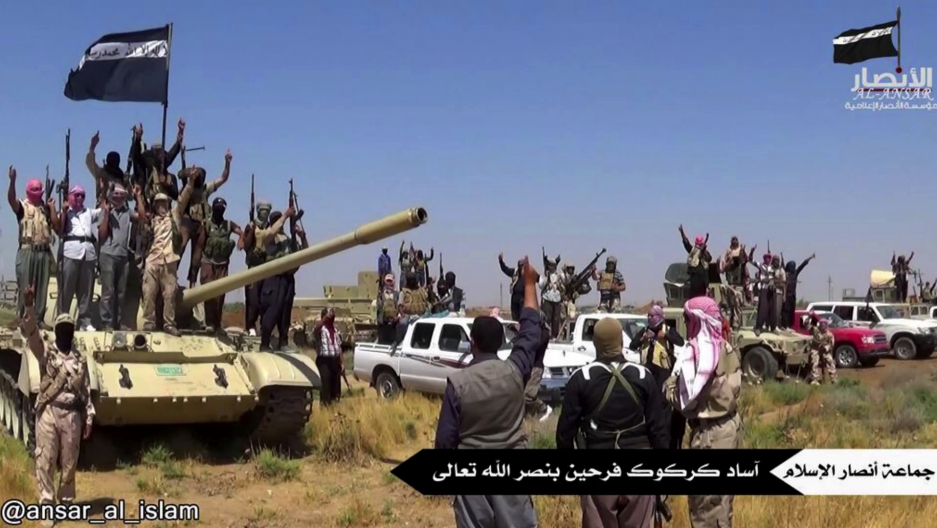 KIRKUK, Iraq — Doctor Sadoon al Obeidi used to be a member of the Mujahadeen Army, a Sunni militant group founded in Iraq a decade ago. Now he fights alongside the Islamic State — the extremist group that split off from Al Qaeda earlier this year and has swept through Syria and northern Iraq in the past month, declaring a new cross-border caliphate.

Thousands of Iraqis like Obeidi have likewise joined the ranks of a coalition working with this Sunni extremist group.

“Long term we have different goals,” Obeidi said. “But we formed this alliance with IS for tactical reasons.”

While the Islamic State, previously known as ISIS or ISIL (for the Islamic State of Iraq and the Levant), is the group the media associate with the Sunni uprising in Iraq, they are in reality one of six main groups that make up the coalition that seized control of a large chunk of western and central Iraq last month.

These groups range from extremist forces like Ansar al Islam, who share a similar ideology to IS, to more nationalist-minded Islamic groups like the Mujahedeen Army and the Naqshbandi Order (JRTN), which was established by former generals from Saddam Hussein’s Baath Party. These forces have swelled in numbers as local citizens and tribal groups have joined their ranks.

The birth of a Sunni coalition

A North Oil Company gas field located near a checkpoint held by militants of the Islamic State (IS), some 30 kilometers southwest of the disputed Iraqi city of Kirkuk. (Marwan Ibrahim/AFP/Getty Images)

Deep divides along sectarian lines — specifically between the Sunni and Shia branches of Islam — have a long history in this region, but most point to recent history, not ancient, when discussing the reasons for this latest conflict. In an interview last week in Kirkuk, Arab tribal leader Abu Abdullah said for years following the US invasion — and the fall of Saddam Hussein and his Sunni Baath Party, giving Shias the upper hand in Iraq — Sunni Arabs have been seeking a formal power-sharing deal with the Iraqi government. He himself was one of many Arab representatives that took part in years of negotiations. But Nouri al-Maliki, who became prime minister in 2006, has taken a hard line against Sunnis, and last year this turned violent.

Abu Abdullah was one of the key organizers of anti-government protests in the Kirkuk region in 2013. The government conducted a brutal raid on a protest encampment in Hawija in April, killing dozens. That, he says, was when negotiations between these various Sunni militants and IS first began.

“The local groups wanted to oust the government from the region, but they couldn’t move forward alone,” he said. “They did not have the strength or financial backing.”

Strength and financial backing is exactly what IS has. But what they lacked was the local support held by the tribal leaders and local Sunni militant organizations. So, Abu Abdullah said, IS was “welcomed” to the fold.

Austin Long, of the Arnold A. Saltzman Institute of War and Peace Studies at Columbia University, described IS as “extraordinarily well organized” not only in a fighting sense, but also in a business sense.

“They understand as well as anybody that you run wars on money,” Long said. “You can see this in the way they are targeting key economic sectors and assets like the oil industry and oil fields. These are guys who are sophisticated at making money in protection rackets and elaborate business setups and converting those resources into combat power.”

While in Syria the majority of IS fighters are believed to be foreigners, Obeidi said in his region, which stretches from Tikrit to Salahaddin, IS fighters are predominantly Iraqis.

How Mosul was taken

IS’s organizational strength translated quickly to military successes in Iraq. While the capture of Mosul last month may have taken the Iraqi government and the world by surprise, Dr. Bassil, a plastic surgeon working in a government hospital, said in fact local residents were well aware of an IS presence in the city prior to the formal invasion.

Bassil and other Mosul residents said representatives of the group had been operating like a local mafia, siphoning payments from government contracts and local business owners.

The taking of Mosul was therefore largely carried out from within. Abu Abdullah said 1,500 IS fighters were planted in Mosul in preparation for the invasion, in addition to local fighters already living in the city.

Mosul resident Zain Abdeen confirmed that many families had secretly hosted IS fighters in their homes, and western Mosul was already largely under IS control.

Division of labor in a new Sunnistan

Kurdish Peshmerga forces opposing the Sunni advance look at a checkpoint held by militants of the Islamic State of Iraq and the Levant in Mosul. (Karim Sahib/AFP/Getty Images)

Although only accounting for what Abu Abdullah estimates to be from 8-10 percent of the coalition fighters, IS has dominated state and international media.

“The media do not have access to these areas so they rely on government reports that use the name of IS to label the Sunni’s terrorists and rally international support,” Abu Abdullah said.

Though there are drawbacks to IS being the face of the Sunni coalition, their name does instill fear in the Iraqi army and has worked to the broader coalition’s advantage so far, Abu Abdullah added.

Far from the media eyes, labor is divided among coalition members somewhat more equitably, according to Sunni organizers. With their varying strengths and weaknesses, each group has taken on different tasks.

“Some groups have taken charge of media and recruitment,” Obeidi said. “The nationalists, with their local influence and support, are taking care of the masses in the cities while tribal leaders control the villages. IS are the most experienced and effective fighters, so they take the lead on the front lines.”

But Obeidi said currently IS has little control over the enforcement of civil laws and is limited in their dealings with the public.

Within days of taking control of Mosul, IS publically announced a list of new Islamic laws, but civilians from Mosul told GlobalPost these are not yet being fully enforced despite rumors to the contrary.

“Even if IS has intentions to enforce their ideas, the people will not accept it,” Obeidi said.

Abu Abdullah said in the cities under Sunni coalition control, the old government departments and the law system are still in place and functioning much the same as before the recent takeover. However, IS has assigned representatives to work within each ministry as “consultants.”

Bassil, the plastic surgeon, said only the government army and police had been replaced. Employees of other government departments, including himself, are still working as before. The central government announced they would slash public service wages this month by two-thirds in Sunni militant held territory, but Bassil said Thursday an IS representative visited the hospital promising all government wages would be paid in full by the new state.

But tensions within the coalition are on the rise. Earlier this month, IS leader Abu Bakr al-Baghdadi declared himself caliph — religious and civil leader — of this jointly held territory.

“The only group that is fine with this announcement is the Baath party,” said Abu Abdullah, referring to JRTN and its ex-Baath party leaders. “They need the fighting power of IS, but when they reach Baghdad they think they can kick them out.”

Abu Abdullah said the other groups are more skeptical.

“The tribal forces are wary of handing too much control to IS,” he said. “We have sometimes suffered from their extreme views. They have killed people and acted without group consent.”

Obeidi had another, perhaps surprising, observation about IS members: “The one thing I have noticed is that most of them do not have enough religious education to be involved with such a movement,” he said. “It seems they have joined IS to fight the government rather than from a religious conviction. This makes people even more afraid of them because without a proper religious grounding and understanding of Islam they can be even more radical, violent and unpredictable.”

Obeidi said IS fighters have been responsible for many executions of government soldiers, particularly members of elite groups including army SWAT teams. A recent report by Human Rights Watch outlined evidence of at least 190 such executions carried out in Tikrit.

In addition, while the coalition has managed to remain united so far, the groups’ long-term goals may differ as much as their tactics.

IS and the more radical elements of the coalition seek first to establish a Sunni caliphate in Syria and Iraq and then to expand this throughout the Islamic world. Obeidi said other groups are more pragmatic. Their focus is on establishing a somewhat secular Sunni-led state in Iraq.

For the time being, all groups have a united focus on taking Baghdad. This is why, according to Abu Abdallah, even those groups unsure about the alliance with IS are refraining from a power struggle at present.

“But it’s getting harder the longer we wait,” Obeidi said. “The initial fight was swift. We caught them off guard. But now [the government forces] have had time to regroup and gather supplies and allies.”

Beyond Baghdad, doubts are rising that such a union can hold.

“We are afraid of a repeat of Syria here,” Obeidi said referring to the vicious infighting between various Syrian rebel groups. “For the moment we have approached this as one unit and achieved more unity than in Syria. But yes, we are afraid IS may try to take more control in the future.”

Because IS is a minority, albeit a more brutal and extreme group than the others, he believes they can be kept in check.

But Long, who spent several years as an analyst and advisor on Iraq, expressed doubts in the ability of Iraq’s Sunni groups to fight IS if they did choose to turn on the extremist elements of their coalition.

"This is a group who have been able to fight the Assad Army, the Maliki government, the Free Syrian Army, Al Nusra Front and the Kurds, all at the same time and still have success,” Long said. “The fact that they have been able to do that is testament to how capable they really are.”