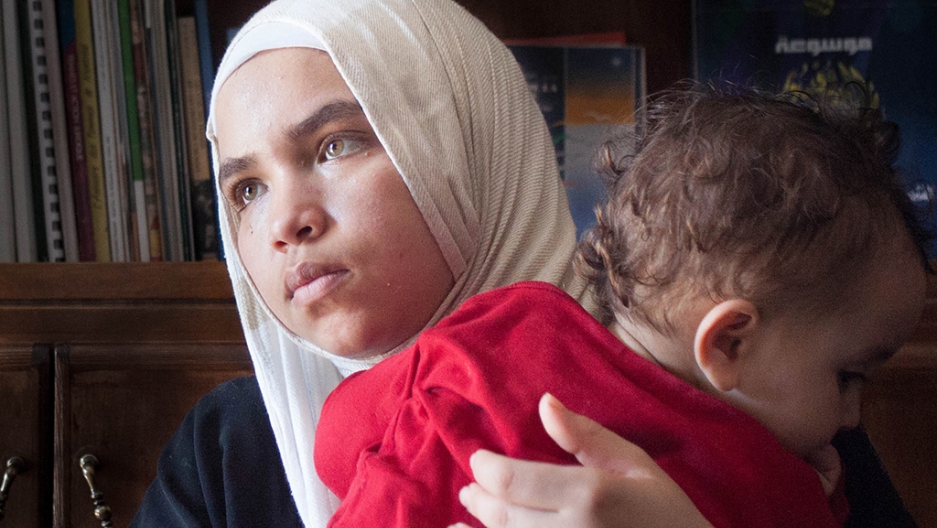 Salima Dakani, 19, was married at 16. She escaped a torturous husband, survived electrocution and rape. She married because her father made her. Her father also demanded that she stop going to school when she was 14. Salima is taking refuge at an association in Rabat, which provides legal assistance, shelter, and help with employment.
Credit: William Matsuda
Share

She is only 19, but she bears the weight of a woman who says she has spent years tortured by a man addicted to drugs and violence, a man chosen for her by parents who believed marriage was the best option for their daughter, an alternative to a life of poverty.

Dakani was married in 2010, at the age of 15. Now, after a four-year marriage to a man she says kept her locked inside for weeks at a time, beating and electrocuting her until she couldn’t move, Dakani has secretly left home with the hope of finding someone who can help her file for divorce.

She is just one of many young girls married under the legal age of consent in Morocco, about twice as many as 10 years ago, according to statements by the Moroccan minister of justice. In 2004, changes to the country’s Family Code, the Moudawana, pushed for egalitarian reforms to outdated laws and set the minimum age of marriage at 18 years. But according to Fatima Maghnoui, President of L’Union de l’Action Feminine (UAF), an organization committed to helping young women find shelter, work, and healthcare in Rabat, the changes still fall short.

“The spirit of the Moudawana is the equal treatment of men and women, but there are parts of the text that contradict that philosophy,” Maghnoui said.

She is referring to Article 20 of the Moudawana that states a girl may be married under the age of 18 with the consent of her legal tutor, often her father, and the authorization of a family affairs judge. The girl herself must also consent to be married.

Though judges are only supposed to give their authorization as an exception in a “well-substantiated decision,” proposals to marry underage girls are accepted 89 percent of the time, according to a report submitted by the Democratic Association of Moroccan Women (ADFM) to the United Nations.

Sixteen percent of Moroccan women in their early twenties were married under the age of 18, compared to only 2 percent in neighboring Algeria, according to 2010 UNICEF data.

Maghanoui says what’s behind these marriages is the patriarchal mentality of Moroccan judges.

“It is a sort of authority limited to the judge, who makes his decision on behalf of the young girl,” she said. “But…when a young girl comes in, maybe she's only 14, but she looks heavier, bigger, so the judge gives her his authorization.”

“The law doesn’t give any guidance of what an exceptional reason would be,” she said, “so there are lots of different reasons why judges are authorizing underage marriages. If she is pregnant, or if she is dating, or seeing some boy, or having sex with him, they are saving family honor and avoiding scandal.”

According to women’s rights advocates, in many cases, judges also grant permission with the idea of saving a girl from poverty.

“When parents come in they explain they have four children, for example, and they want to get rid of their daughter,” said Maghanoui. “They want to get her married, even if she is underage. Imagine a girl who does nothing, who has no professional future, who lives the routine of daily life. What else can she be? Sometimes it’s her who wants to get married, because she doesn’t do anything.”

Still, there are Moroccan judges who resist the pressure from girls and their families.

“I had a private conversation with the judge. He asked regular questions about my age, my health, my family, et cetera,” says Selwa Adil, 20, who was once engaged to a man nine years her senior. “But the marriage registration was turned down and the judge told us to come back the year after.”

Instead of waiting until she came of age, Adil’s family decided to employ a traditional marriage ceremony in Morocco — the reading of the Fatiha, a binding verse in the Quran. These marriages, though they are unrecognized by the state, are often the solution when a judge refuses to approve the underage marriage. Adil’s marriage was brief, as problems arose and she promptly moved back into her family home just 12 days after the wedding.

Such conflicts are common. Though she didn’t particularly want to get married, Ghizlane Asmane says it was her idea to quit school at the age of 11 and, until her engagement at the age of 16, she says she did nothing but stay in the house and cook. However, once she had moved into her husband’s family home, which is typical for underage brides, Asmane found she did not have the freedom she’d hoped for.

“I had conflicts with both the groom and his family,” said Asmane. “With the family it was mostly about the household. I got scolded by my husband’s family for things like cooking and cleaning.”

Not all underage marriages are unhappy and unsuccessful. Rachida Diani, 27, was married when she was 14. When she looks back on her marriage, Diani comments on the difficulty of moving into a new home at such a young age, but focuses mostly on the happiness her three children have brought her. For Diani, getting married was the start to her life. Still, when asked if she has an opinion on the prevalence of underage marriages, she is quick in her response.

“No girl should be allowed to marry before the age of 18,” she said.

For Bordat, of MRA, it is simply a human rights issue.

One of those rights involves education, according to advocates.

“The place of young girls is in school and not in a conjugal household,” said Maghnaoui. “To eradicate poverty, we need to put structures in place: schools and information centers; and we need to integrate women in other ways once they have left school.”

The Moroccan government is working on awareness raising campaigns and is considering making 16 the minimum age limit for judge-authorized marriages, according to judge Abdelhadi Elbattahe of the Ministry of Justice. But it’s not easy to overcome cultural traditions that approve of underage marriage, he adds.

“This phenomenon isn’t linked to the law in particular, it is linked to mentality and prevalent social concepts,” says Elbattahe.

In the meantime, women’s advocacy groups are working to provide services for young women, like Salima Dakani. Though Maghnaoui and her coworkers at UAF hope to eventually help Dakani file for divorce, they face an even more pressing concern: finding a safe place for her to stay.

Hannah Rehak and William Matsuda spent several months in Morocco on an SIT Study Abroad program and produced this story in association with Round Earth Media, a nonprofit organization that mentors the next generation of international journalists. Malak Mihraje contributed reporting.