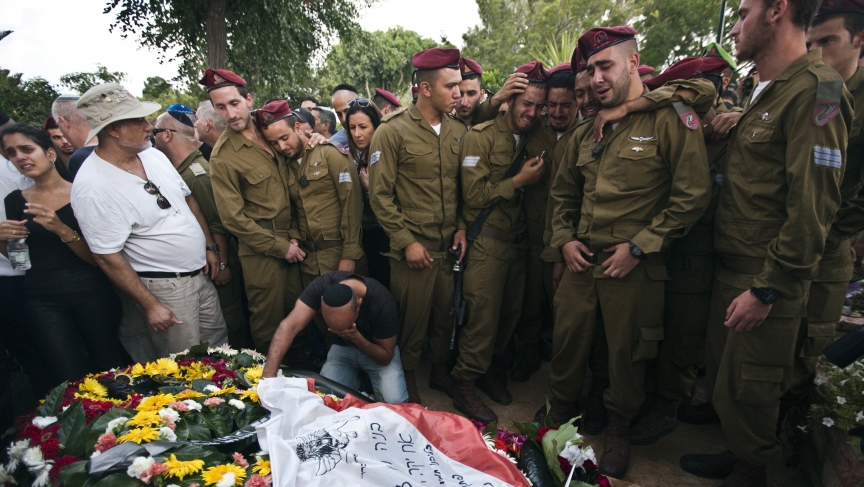 Israeli soldiers mourn the death of their fallen comrade, Bnaya Rubel, during his funeral in Holon, Israel, on July 20, 2014.
Credit:

Israel's ground operations in Gaza have led to the some of Israel's highest military casualties in years.

On Monday, the Israel Defense Forces (IDF) announced the deaths of seven soldiers fighting in and around the Gaza Strip. That followed 13 Israeli combat deaths on Sunday, the single deadliest day for the IDF since 2006. At least 25 Israeli troops have died since the IDF launched the Gaza ground invasion on July 17.

Those numbers pale in comparison to the Palestinian death toll, which climbed above 500 on Monday. But the deaths of Israeli combat soldiers came as a jarring reminder of the kind of enemy the Israeli military is facing in the Islamic militant group Hamas.

The Israeli newspaper Ha'aretz quoted an Israeli officer, a veteran of past Gaza campaigns, who described this latest crop of Hamas fighters as a new and improved military force. "I've been to Shujaiyeh [the scene of Sunday's battle] before, but I've never seen it — or Hamas — like this before," the commander said.

"Their equipment and tactics are just like Hezbollah — missile traps and IEDs everywhere. And they stay and fight instead of melting away like in the past."

The news of Israeli casualties came as no surprise, however, to Yossi Melman. He's an Israeli military analyst and co-author of “Spies Against Armageddon: Inside Israel's Secret Wars.”

“It's a war,” Melman says. “Hamas is fighting a fierce battle. One has to admit it.”

Melman doubts that Israel's top military brass are surprised to find that Hamas has stepped up its capabilities. “Israel has not been shocked. The IDF had knowledge about the Hamas preparations for the next round [of conflict]," he claims.

Despite the deaths, however, Melman sees little sign that Israelis are tiring of the conflict. “I sense that this is one of the very few wars in which the public is not losing [patience,]" he says. "So far."