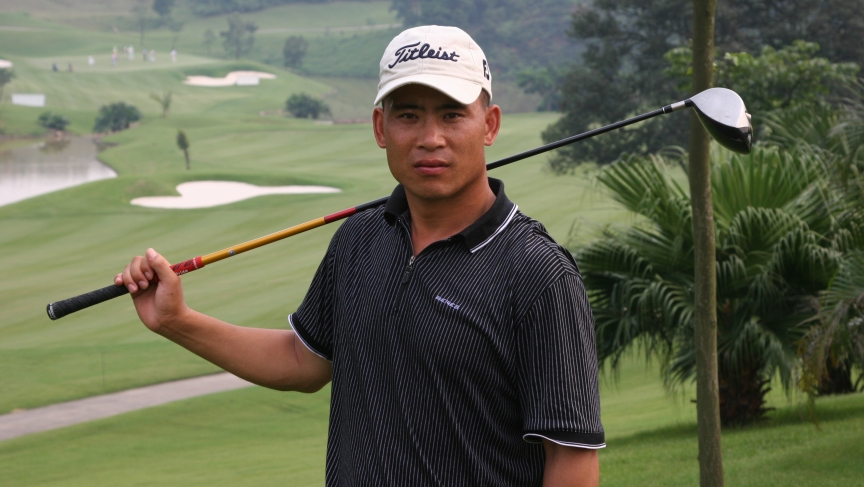 Zhou Xunshu is one of the subjects of Dan Washburn's new book on golf in China
Credit:

On the back cover of Dan Washburn's new book, "The Forbidden Game: Golf and the Chinese Dream," you can find this wildly appropriate tagline: "In China, just because something is banned, doesn't mean it can't boom."

“Golf has definitely had a … complicated relationship with China,” Washburn told me recently in an interview.

Start with this fact: in 1949, Mao Zedong banned the game, deeming it "bourgeois."

“Mao denounced it as the sport for millionaires,” says Washburn. “Existing golf courses were dug up and re-purposed. The Hongqiao golf course in Shanghai is now the home of the Shanghai Zoo.”

Washburn says that things started to change 30 years ago. That's when the first modern golf course, designed by none other than Arnold Palmer, opened in China.

“But golf still had an image problem, and it still does today. It's known as the rich man's game. And it is. It's a prohibitively expensive pursuit. It's tied to corruption in the minds of many. And it's not something that the government is eager to embrace, at least publicly.”

“You're not going to see Xi Jinping playing a round of golf with President Obama anytime soon. It's just too touchy of a subject, because you're in a country with a billion people living on less than $5 a day, and a round of golf costs upwards of $150," Washburn says.

Little wonder then that, statistically speaking, zero percent of the Chinese population play the game. Still, even if only a handful of Chinese are playing, that handful can be about a million people.

Washburn’s book focuses on one of those million who *really* wanted to play golf.

His name is Zhou Xunshu.

Zhou was first introduced to golf while working as security guard for a golf course.
Credit:

He grew up helping his parents on their farm. But then in his early 20s, he moved to the city to find work.

“He landed a job as a security guard,” Washburn relates. “And he happened to be a security guard at a thing called a 'golf course.' He had no idea what golf was at that time.”

“He studied the game, he studied the movements of the players, and just so badly wanted to play. So he started plotting how he could do this in secret.”

The problem was that low-level employees like Zhou weren't allowed to play on the course.

“But Zhou found ways around this,” Washburn says. “He even went so far as to make some practice clubs with the shafts of discarded clubs, then put a cement head on it made from discarded water bottles.”

“Then he'd go up to the roof of the worker dormitory and just swing, and with a little bit of anger, because he wasn't allowed to play on the course.”

Then one day, in a moment worthy of Hollywood, Zhou got his chance.

His bosses were on the driving range testing out some new golf clubs.

In a documentary posted on You Tube, Zhou recounts what happens next.

"They said I could try it," Zhou says.

"It was my first time touching a real club."

Zhou says, "I was excited, you know? I missed the ball twice. On the third try, I hit the ball. More than 300 yards."

Over the course of writing the book, Zhou and Washburn became good friends.

“Zhou is the ultimate underdog. I find his story very inspiring. I find him inspiring, and I'm lucky to have him in my life,” says Washburn, who even spoke at Zhou's wedding a few years ago.

He says that Zhou represents the first generation of Chinese golfers: self-taught players from humble backgrounds.

A new, wealthy Chinese elite are setting their kids up with professional golf instruction from a young age, and also paying for those kids to compete internationally. Think of the young phenom Guan Tianlang, who at the tender age of 14 years, five months won "low amateur" in last year's Masters — that's the award for the lowest-scoring amateur who makes the cut in the tournament.

And now, because golf is an Olympic sport, the Chinese government is — gingerly — sinking money and resources into building a national team that can win medals.

For its part, the PGA is now officially sponsoring a dozen or so tournaments in China.

All this at the same time that, for the past decade, the construction of new golf courses in China has been officially banned. There's even a unit called "The Golf Police" which is supposed to enforce this.

Although, Washburn notes, that hasn't stopped a boom in new courses. "Rule number one when building a golf course in China is to not call it a golf course. Maybe they'll call it an eco-park, or a green space, to get around this supposed ban."

Still, Chinese success on the international front may take some time.

China's Wu Ashun qualified for this year's British Open, but didn't play in Liverpool on Saturday and Sunday. He didn't make the cut.

Dan Washburn expects that, too, will soon change.

“I think it's something that golf fans are going to have to get used to — seeing a lot of Chinese names on the leaderboard. It's not going to happen overnight, but in the next ten years or so, I think it's going to become pretty commonplace. I think sportscasters around the world better brush up on their Chinese pronunciation.”

By the way, Washburn notes, a professional Chinese golfer has already won a major. In 2012, Feng Shanshan won the LPGA tournament.

Still, Washburn notes, Feng can't even find sponsorship in her own country, and is often not even recognized in her hometown.