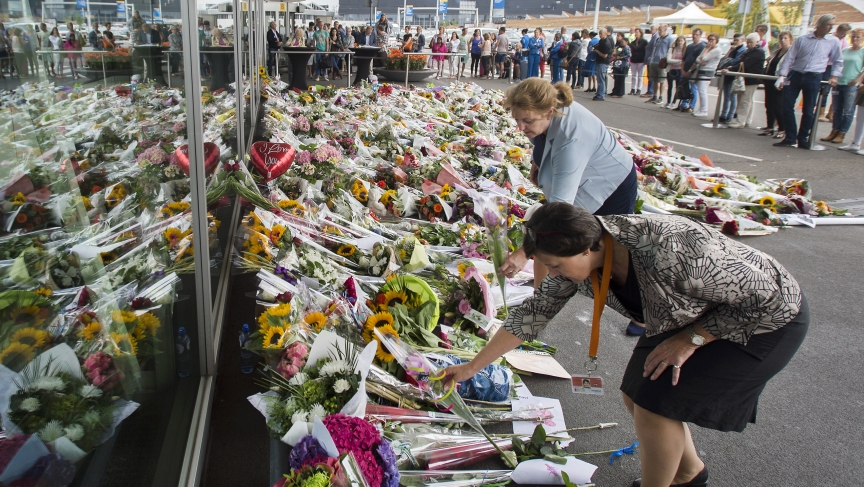 Women place flowers outside Schiphol Airport in memory of the victims of the crashed Malaysia Airlines flight MH17 July 21, 2014.
Credit:

193 Dutch citizens were aboard Malaysia Airlines flight 17 when it was felled by a missile over eastern Ukraine. In the Netherlands, people have referred to it as their 9/11. Now, some in the country are calling for a stronger response from their government.

In a column for Politico, Dutch writer Bas Heijne said on Sunday that it's time for the country's politicians to "man up" and take on Russia. The Malaysia Airlines plane is widely believed to have been shot down by separatists in eastern Ukraine, who are supported by Moscow.

The Dutch government is taking the lead in identifying the victims and has said it wants to do the forensic examination in the Netherlands. On Sunday, Dutch Prime Minister Mark Rutte said he had urged Russian President Vladimir Putin during a "very intense" call to "take responsibility" for a credible probe into the crash.

But Heijne thinks more is required. "The truth is that for too long the Dutch government has coddled the dictator in Moscow, looking past Putin’s blatant offenses against human decency," Heijne wrote in his column.

He also predicted that the Dutch would cave to Russian pressure over an investigation into the crash. "The Russian president, in his letter of condolence to Rutte over the air disaster, agreed to the Dutch demand for an independent inquiry," Heijne wrote. "But if the Dutch government’s past behavior toward Putin is any guide, there will be little follow-up."

Heijne cited an incident last October where Onno Elderenbosch, a Dutch diplomat, was accosted in his Moscow apartment by "a gang of thugs." Heijne charged that the act appeared to be revenge for the arrest of a drunken Russian diplomat in The Hague. Russia was supposed to do an inquiry. "Nothing was ever heard about the inquiry. So far, no one has been arrested," he wrote.

Heijne said that the Dutch government is too concerned about disturbing trade relations with Russia to push harder for answers. “The Dutch are big exporters of goods to Russia, and the other way around, of course," he said during an interview with PRI's The World. "The Netherlands import a lot of oil and gas [from Russia.] So that’s the kind of relationship that is not really healthy in the moral sense, that a lot of things are pushed under the carpet because we don’t want to hurt trade relations.”

Other public figures in the Netherlands joined in Heijne's call. Dick Berlijn, a former commander of the Dutch military, told Reuters that "[I]n the Netherlands, we are inclined to approach our opponents in a fair and socially acceptable way in hope that opponents will respond in kind ...  What we have seen, especially with the Russian administration, is this didn't impact at all, they saw this as a weakness."

And the Dutch government may be responding to these criticisms. On Monday, it announced it was opening a war crimes investigation into the crash. Prime Minister Rutte also called out Russia in front of a Dutch parliamentary committee, saying it needed to rein in the rebels in eastern Ukraine and threatening action if investigators aren't allowed to do their work.

"It is clear that Russia must use her influence on the separatists to improve the situation on the ground," Rutte said. "If in the coming days access to the disaster area remains inadequate, then all political, economic and financial options are on the table against those who are directly or indirectly responsible for that."