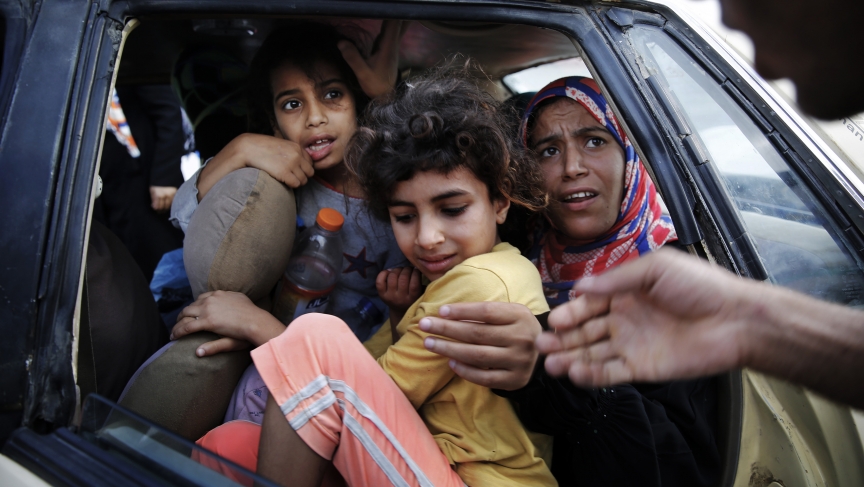 Sunday morning in Gaza City, civilians in a neighborhood called Shejaiya streamed out of their homes. Throughout the night, they'd lived a nightmare.

The Israeli military had intensified its assault on the Palestinian neighborhood with a heavy bombardment. The BBC's Lyse Doucet walked through the remains of one building with a team of medics that morning.

"The sheets are ready, the stretchers here. You can see the body parts protruding, buried under rocks and rubble, and sand and bits of torn cloth," Doucet says. "The sound of shelling, bombardment that went on through the night, is continuing now in the day."

Doucet describes clouds of smoke rising from the end of the street and people running "everywhere you look."

She catches sight of two women — one young, the other elderly. She says the elderly woman "is holding as high as she can a piece of cloth, a white piece of cloth, a flag of surrender, as if that's going to protect her as she walks with dignity down this street."

Later, in the main hospital in Gaza, Doucet finds the wards "absolutely packed." She sees a 4-year-old girl with her leg and hand bandaged. She is told one member of the girl's family was killed and seven were injured.

Across town, Gaza City resident Azmi Keshawi says that, despite Israeli assurances to the contrary, there is no safe place for Gazans to shelter.

Editor's note: This article was updated to correct that Lyse Doucet was reporting from Gaza City on Sunday instead of Monday, July 21.