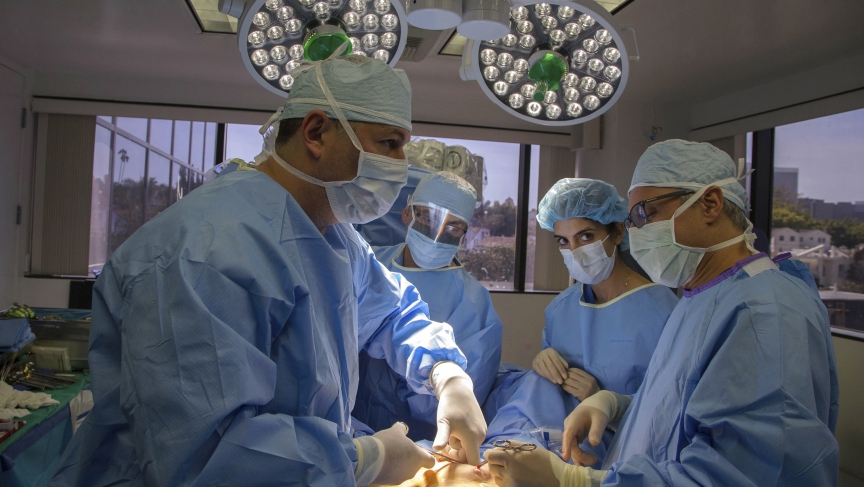 It sounds straight out of a bad sci-fi movie: doctors pump patients' veins full of a preserving agent to keep them in suspended animation. But that procedure could come to a hospital near you in the next few years.

The idea is to give doctors a bit more time to treat people with serious trauma. In the most severe injuries, the brain is the key to survival, not the injuries themselves. Without keeping the brain oxygenated and alive, surgeons can't fix the damage to other parts of the body.

"The brain dies in about three to four minutes," says Dr. Hasan Alam, head of general surgery at the University of Michigan Health System. "Even if you get the heart started and it's more than three or four minutes, then you have somebody in a vegetative state. That's the limiting factor, not the injuries."

So Alam, along with researchers at the University of Pittsburgh and four other medical centers, has pioneered a new way to give surgeons the time they need. Doctors chill the bodies of their patients by putting frigid saltwater into the circulation system. The patients have already lost much of their blood, so the saltwater fills the veins and arteries.

That cools the body to about 10-15 degrees Celsius, or 50-60 degrees Fahrenheit. "The body goes into a so-called state of suspended animation, where you're still alive, but the metabolic functions are so low that you don't require oxygen," Alam explains. "The brain can be deprived of oxygen and still not die."

With the brain safely on ice — so to speak — "that gives surgeons the time, and it could be up to two to three hours, to fix the underlying injuries," Alam says. And it has had a huge effect in animal tests: "It converts a 90 to 100 percent lethal situation into about a 90 percent survivable situation."

Alam stresses that the technique is for use in the most extreme situations, when patients have lost most of their blood and vital signs and seem to have no other options. So far, researchers have only tested the technique on pigs, but with great success. The animals could be fully revived after spending long periods chilled this way.

Alam says, initially, other researchers were skeptical about whether the animals might have lost any brain function. So in further tests, his team first trained the pigs to do specific tasks, like find food in a certain hiding place. After reviving them, Alam says they not only remembered the old skills, but learned new ones just as well as non-injured animals.

The data so far is "really exciting and potentially field-changing," he says. "Now, obviously, the challenge is, how do we translate it into clinical practice?"

They'll get a chance to try with a new FDA-approved feasibility study. The goal of such tests is to simply prove that the procedure can be carried out safely on humans in the pressures of real-world hospitals. More exhaustive tests involving controls and comparative treatments will come later.

Even such basic trials come with major safety and ethical concerns, so they must meet standards set out by special hospital review boards. Because the technique will need to be used on trauma victims where there's no time to get consent even from relatives, doctors will have to educate all potential patients in a community — potentially hundreds of thousands of people — in case some want to opt out in advance.

"That's why it's extremely difficult and challenging and time-consuming and expensive to do these trials," Alam says.

He says he understands the concerns, such as the fear that the cooling method could put people into a vegetative state. He points out that other breakthrough procedures —  like organ transplants and heart surgery — were equally unknown and risky when they were first tried on people, and now are routine. "All of these things were science fiction and raised a lot of angst, not just in the medical community, but in the public, as well," Alam says.

For now, he's glad to be pressing forward with what he and other doctors see as a critical advance in trauma medicine. "More young Americans die of injuries than all of the diseases put together" Alam says. "It's a challenge that we all feel."

This article is based on an interview that originally aired on PRI's Science Friday with Ira Flatow.