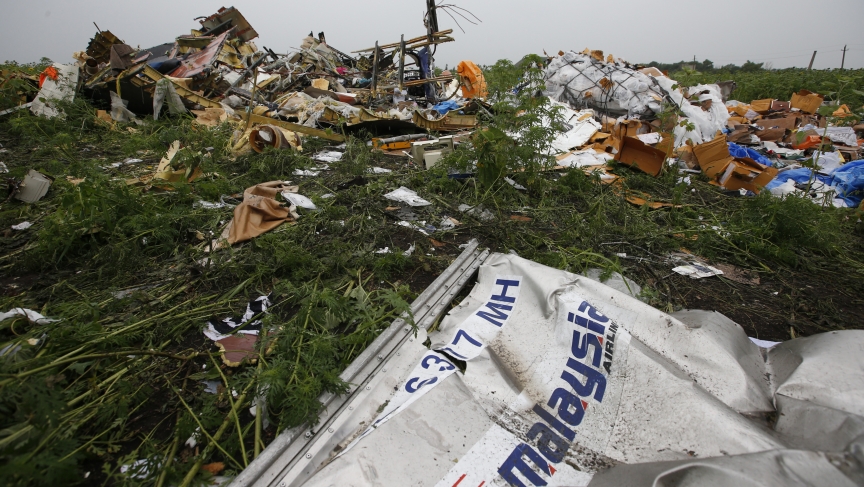 Wreckage from the nose section of a Malaysian Airlines Boeing 777 plane which was downed on Thursday is seen near the village of Rozsypne, in the Donetsk region July 18, 2014.
Credit:

The government of Ukraine — joined by American officials — has accused pro-Russian rebels of shooting down Malaysia Airlines flight 17, which crashed Thursday in eastern Ukraine.

In a press conference on Friday morning in Washington, President Obama called the deaths of the 298 passengers on board an "outrage of unspeakable proportions." While Obama said it's still too early to verify exactly who fired the missile, he had harsh words for Russia.

"The violence there is facilitated in part — in large part — because of Russian support," he said.

The only certain fact so far is that a surface-to-air missile was fired, and that missile was launched from territory controlled by Russian separatists.

More than half of the victims were Dutch citizens, says the BBC's Anna Holligan, who visited the Schiphol Airport in Amsterdam, where the plane took off.

"We arrived at the same time as many of the relatives, as they dashed through the security cordons and upstairs for news," Holligan recalls. "They arrived, many with their hopes intact, but when they left, you could tell many had been given this devastating news that there was no hope, no survivors on board MH17."

Holligan says the relatives of the passengers on board appeared silent, stunned — united in grief and disbelief. They have been taken to a hotel where they're being cared for by staff members. Those who wish to visit the crash site are being flown to Kiev before being transported to the area in eastern Ukraine.

"The flags across the country are flying at half mast," Holligan says. "This is a country in mourning now."

Holligan spoke to PRI's The World en route to a small village in the south of the Netherlands. It is the home of a family of six people who were all reportedly aboard the flight to Kuala Lumpur. Tributes are now piling up on the family's doorstep.

"Many people are comparing this to America's 9/11," says Holligan. "They say that this is the Netherlands 9/11."

Ihor Dolhov, Ukraine's ambassador to NATO, says there is proof Russian separatists shot down the plane. Over the past three days, Dolhov says, Ukranian military aircraft have been shot down by separatist groups.

"Today, the Chief of Security Services of Ukraine presented publicly several intercepted phone conversations between terrorists and their bosses in Moscow," he says. "And it's quite clear they discussed the situation and they proved that this [missile] system, Buk-M, has been transferred from the Russian territory. And yesterday night, we received alarming news here that those groups are trying to move this Buk-M back to the Russian territory."

Charles Maynes says that the rhetoric in Moscow is very different. Russian media are pushing a story that Russia is innocent, says Maynes, and that the plane's crash is Ukraine's fault.

“They argue some very conspiratorial versions of what’s happened," he says. "First of all, they say they have witnesses on the ground — they interview by phone — who say they’ve seen Ukrainian fighter jets attacking the airliner near Donetsk. They’ve also said the [Russian] Defense Ministry has said its radar has tracked rockets fired by the Ukrainian army.”

There was even speculation in Russian media on Thursday that the plane was fired upon because it flew a similar flight path to Vladimir Putin's presidential aircraft, implying that the crash was an attempted assassination.

As the situation escalates, Ukraine Ambassador Dolhov believes that Russia should close its border with Ukraine. "We continue to call on Russia to negotiate the situation, and to at least close the border from the Russian side," says Dolhov.

"What we see every day — and every night, especially — that more and more munitions and armed people cross the border from the Russian territory."

For more information on flight 17, check out our original story on the crash, which has been frequently updated throughout Thursday and Friday with the latest news.