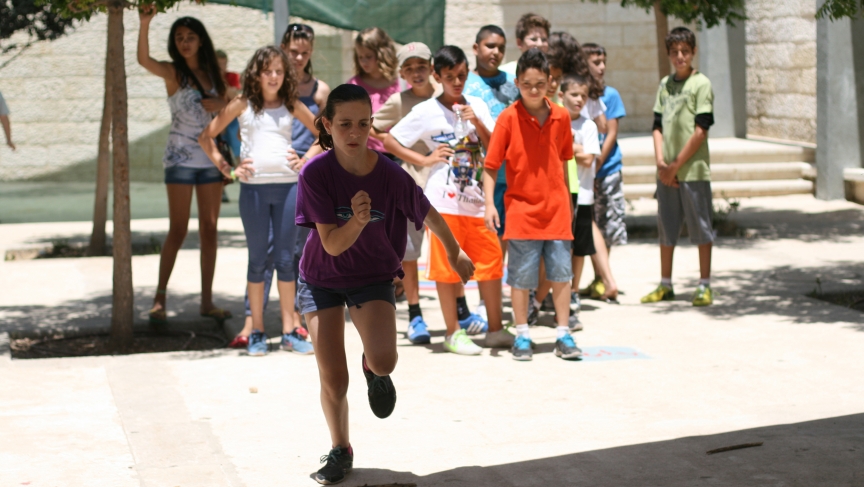 The kids at Project Harmony camp mostly do normal summer activities, like participate in sports tournaments, as a way to get to know each other. Here, children compete in a jumping contest.
Credit:

The recent violence between Israelis and Palestinians has been particularly tough on children. Three Israeli teens were murdered in the West Bank and one Palestinian teen was killed in east Jerusalem.

Now, as Israel bombs Gaza and Hamas shoots rockets at Israel, children are ducking for cover on both sides. The events are raising tensions between Israelis and Palestinians all over the region. But at one summer camp in Jerusalem, 100 Jewish and Arab children are trying to stay connected.

Project Harmony is run at Jerusalem’s only Arabic-Hebrew bilingual school, the Max Rayne Hand in Hand school. Kids have been coming together here for five years, but this is the first time the kids are coming during war. Efrat Meir, who helps organize the camp, said the staff made sure everyone was prepared. Camp started July 6 — just days before Israel launched Operation Protective Edge.

“Already we knew the environment was not so stable,” Meir said. “The first day we talked to the kids about how it might be stressful, but the real violence started later. After the first night sirens, we made sure they all knew where the shelters are and we did another drill. In the school.”

There was an all-American “rah-rah” spirit at camp Tuesday. It was partly because camp is run in English, and partly because it was co-founded by Americans Lexie Tabachnick and Meg Sullivan. There are 23 counselors, mostly American. Campers range in age from 9 to 14.

Rafi Filimon, 12, goes to the school year-round. He and his friend Emmanuel Samara, 11, are Christian Palestinians from Jerusalem. Emmanuel said Rafi’s mom kind of sprang camp on them.

“His mother gave us a paper to fill, she told us about the camp,” he said. “So we filled it.”

All the kids eat lunch together — on Tuesday, it was a giant pot of maqlouba, a Palestinian dish made with rice and fried vegetables. There’s no meat at camp, so no one has to worry about breaking Jewish or Muslim dietary laws. So far this summer, there has also been no pool — staff was worried about the rockets.

Still, the kids do usual camp stuff — sports, movies, arts and crafts. Tuesday was sports day. And kids learn about each other through casual interaction. Take language, for example.

“I was happy when I heard them speaking Arabic because they are Jews speaking Arabic,” Emmanuel said. “But in the R they say rrrr. So sometimes you don’t understand them.”

Jewish Israelis Inbar Shaked-Vardi and Lelia Ben-Horin, both 14, both go to the school year-round. Inbar said her friends outside don’t understand, especially now.

“Before everything started, they thought it was cool, you go to this school, and you speak Arabic,” she said. “But right when it started, most of them were mad at me, that I go here, that I speak to Arabs. Because when three kids had been murdered, and everybody thinks that who did it is Palestinians, Palestinians become enemies.”

Emmanuel said he doesn’t plan on telling anyone where he spent the summer. His normal school has no Jewish students — and he doesn’t think his friends would get why he’s here.

“If they hear it, my friends in school, they will say ‘you love Jews, you love Jews’,” he said. “In front of my friends I say I don’t love Jews. They make it a big deal.”

Another thing these children share is just being kids in a time of war. Jerusalem has been targeted by Hamas rockets. And before that were the kidnappings. Lelia said her mother didn’t let her visit friends or stay out late.

“My mom was scared and I was scared,” she said. “I think she went overboard.”

That fear is familiar to Emmanuel. He said he and Rafi sometimes speak only English or Hebrew on Jerusalem buses, to avoid being pointed out as Arabs.

“Sometimes when I knew I had to go on [the] bus, I became a little bit scared because of rockets from Gaza to Israel,” Emmanuel said. “Because of this, Jews now, they’re angry at Arabs. So I was scared.”

On Tuesday morning, while the children played, gunshots went off in the distance. Later, police said it was Palestinian children shooting in the air to celebrate the results of the tawjihi final exams. But the initial fear we all felt underscored the relief of this camp, and the school itself. Asked if the Jewish children cheer on Israel, while Arab kids root for Hamas, Lelia said, “I don’t feel like we have teams.”

“This war isn’t between Jews and Arabs,” Inbar said. “It’s between insane people who are full of hate. In this camp we are all together. We’re all here against them.”