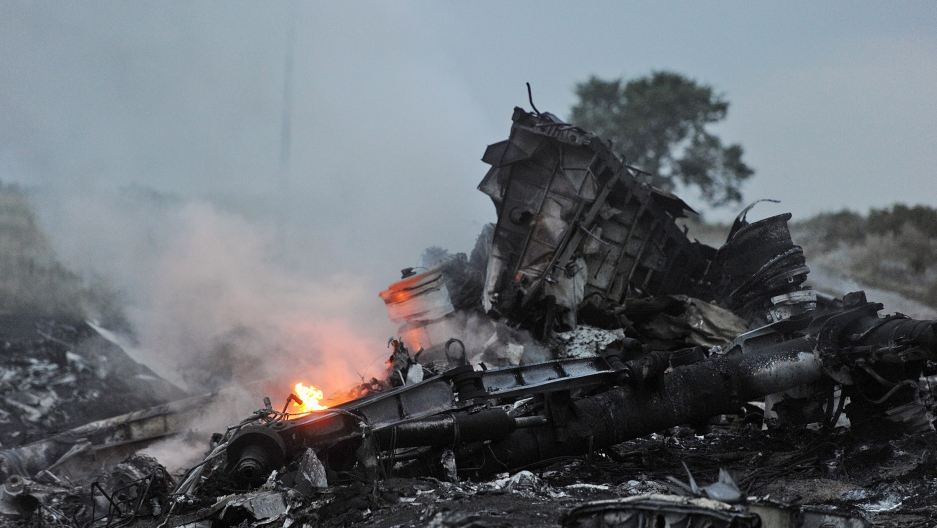 A picture taken on July 17, 2014 shows flames amongst the wreckages of the malaysian airliner carrying 295 people from Amsterdam to Kuala Lumpur after it crashed, near the town of Shaktarsk, in rebel-held east Ukraine. Pro-Russian rebels fighting central Kiev authorities claimed on Thursday that the Malaysian airline that crashed in Ukraine had been shot down by a Ukrainian jet. The head of Ukraine's air traffic control agency said Thursday that the crew of the Malaysia Airlines jet that crashed in the separatist east had reported no problems during flight. AFP PHOTO/DOMINIQUE FAGET (Photo credit should read DOMINIQUE FAGET/AFP/Getty Images)
Credit: DOMINIQUE FAGET
Share

We still don't know precisely what happened to Malaysia Airlines Flight 17, which was flying yesterday from Amsterdam to Kuala Lampur and carrying 298 people onboard when it crashed in Chornukhine, Luhansk Oblast, approximately 50 miles northwwest of Donetsk.

As we learn more, you'll find it on GlobalPost's MH17 live blog.

While still unconfirmed, it's looking more and more likely that MH17 was accidentally shot down by pro-Russian separatists armed with surface-to-air missiles.

The Security Service of Ukraine (SBU) claims to have found the smoking gun that proves it.

The SBU has released audio of what it says are phone conversations between Russian military intelligence officers and pro-Russian separatist fighters in which they discuss shooting down the plane and inspecting the crash site.

Listen for yourself and read the full transcript below. This has not been authenticated, and there's obvious political repercussions if it was pro-Russian separatists. So it take it for what it's worth.

Full transcript of the video:

Igor Bezler (alleged Russian military intelligence officer and commander the separatist "Donetsk People’s Republic"): We have just shot down a plane. Group Minera. It fell down beyond Yenakievo (Donetsk Oblast).

IB: Gone to search for and photograph the plane. Its smoking.

[SBU comment: After examining the site of the plane the terrorists come to the conclusion that they have shot down a civilian plane. The next part of the conversation took place about 40 minutes later.]

“Major” (separatist fighter): These are Chernukhin folks who shot down the plane. From the Chernukhin check point. Those cossacks who are based in Chernukhino. “

"Major": The plane fell apart in the air. In the area of Petropavlovskaya mine. The first “200” [code word for dead person]. We have found the first “200”. A Civilian.

“Greek”: Well, what do you have there?

“Major”: In short, it was 100 percent a passenger (civilian) aircraft.

“Greek”: Are many people there?

“Major”: Holy sh__t! The debris fell right into the yards (of homes).

“Greek”: What kind of aircraft?

“Major”: I haven’t ascertained this. I haven’t been to the main sight. I am only surveying the scene where the first bodies fell. There are the remains of internal brackets, seats and bodies.

“Greek”: Is there anything left of the weapon?

“Greek”: Are there documents?

“Major”: Yes, of one Indonesian student. From a university in Thompson.

Militant: Regarding the plane shot down in the area of Snizhne-Torez. It’s a civilian one. Fell down near Grabove. There are lots of corpses of women and children. The Cossacks are out there looking at all this. They say on TV it’s AN-26 transport plane, but they say it’s written Malaysia Airlines on the plane. What was it doing on Ukraine’s territory?

Nikolay Kozitsin (Cossack commander): That means they were carrying spies. They shouldn’t be f…cking flying. There is a war going on.