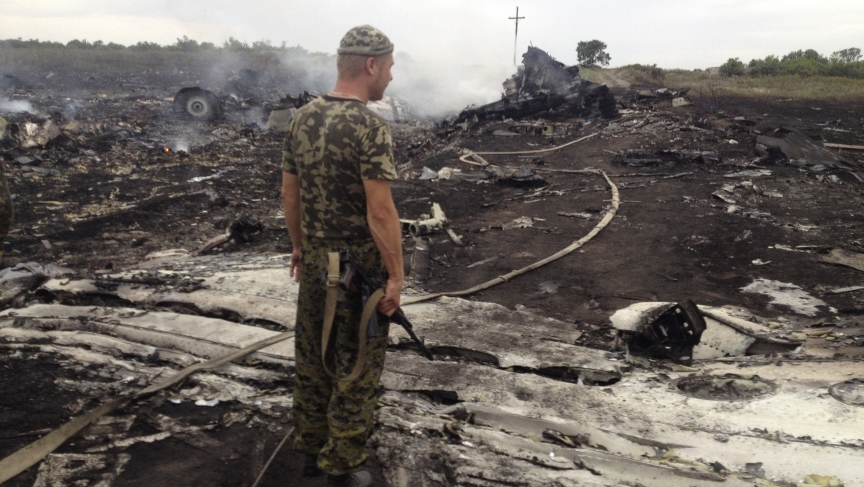 An armed pro-Russian separatist stands at a site of a Malaysia Airlines Boeing 777 plane crash in the settlement of Grabovo in the Donetsk region, July 17, 2014.
Credit:

Malaysia Airlines flight 17 from Amsterdam to Kuala Lumpur, the Malaysian capital, crashed in Ukraine on Thursday.

Ukraine's president has called it a "terrorist act," and says the flight was shot down by forces aligned with Russian-backed separatists in the country's eastern region. On Friday Ukraine's security agency released a video containing alleged evidence, including a conversation between rebels and Russian intelligence officers, that militants shot down the aircraft.

(Note for readers: This is a breaking story. More information will be added to this article as it becomes available. Live blogs are also available at many outlets like Reuters and The Interpreter)

American intelligence officials confirmed on Thursday that the plane was downed by a "Buk" surface-to-air missile, called the SA-11 by NATO countries. On Friday, at a meeting of the UN Security, American Ambassador to the UN Samantha Power blamed the crash on Ukrainian separatists and assigned Moscow much of the responsibility for escalating the conflict.

"Because of the technical complexity of the SA-11, it is unlikely that the separatists could effectively operate the system without assistance from knowledgeable personnel," Power said. "Thus we cannot rule out technical assistance from Russian personnel in operating the systems."

She also criticized Russian President Vladimir Putin for failing to work towards a resolution of the situation in Ukraine. "This war can be ended," she said. "Russia can end this war. Russia must end this war."

President Barack Obama also responded to the crisis on Friday, condemning widespread disinformation surrounding the incident and calling for a ceasefire that would allow an international investigation. Like Power, he took Russia to task for its support of the separatists.

Obama: "The violence there is facilitated in part, in large part, because of Russian support."

But pro-Russian separatists have blamed the crash of the Boeing 777-200, on Ukrainian government forces. Russian officials have also said that Ukraine is responsible. "We place all blame on the power in Kiev and call on the Ukrainian side to take strong measures," said Vitaly Churkin, the Russian ambassador to the UN, to the Security Council. He said that "aggressive acts" by the Ukrainian government had led to the tense atmosphere that enabled the dowining of the plane.

All 298 people aboard the plane died in the crash. Reportedly among the deceased was a large group of AIDS researchers on their way to a conference in Australia, including Joep Lange, a pioneer in HIV research.

http://t.co/Qc88zz7UAu Donetsk says the Malaysian plane was attacked by a Ukrainian fighter jet, which rebels say they downed afterwards.

Speculation is centering on the pro-Russian separatists who control parts of eastern Ukraine, including the Donetsk region over which the plane was destroyed. In recent days, those rebels shot down at least one Ukranian military aircraft and reportedly also downed a Ukrainian An-26 transport plane on Monday. Samantha Power detailed the list of incidents on Friday:

The self-declared prime minister of the Donetsk People's Republic, Alexander Borodai, denied that the breakaway region's forces either shot down the flight or controlled any weapons capable of doing so.

Rebel PM in Donetsk Alexander Borodai tells BuzzFeed it’s “impossible” rebels could have downed MH17, don’t have the weapons to reach it.

Flight 17 was flying at 33,000 feet before it crashed, well outside the range of the anti-aircraft weapons the rebels are confirmed to hold. But in a Russian media report last month, the rebels said they had captured a "Buk" missile system, the type that the Ukrainian government said was fired on the jetliner. The Donetsk People's Republic also posted a now-deleted tweet showing photos of a missile launcher in its possession. The Ukrainian government denies that rebels captured any Buk missiles from their forces.

On Twitter, journalists and analysts also circulated a Russian-language post in which separatist leader Igor Girkin allegedly claimed that his forces shot down Flight 17 after mistaking it for a Ukrainian military plane:

Bystanders captured what they say is video of the crash:

As of Friday, rebels still controlled the crash site, and even reportedly fired on international investigators who attempted to access the wreckage. Reporters onsite shortly after the crash described the scene in stark terms:

At crash site of #MH17. Bodies everywhere, organs splayed out. Too gruesome to post photographs. This is an absolute disaster. #ukraine

Locals say everything exploded in the air, fell in pieces, both bodies and plane itself. Ppl thought they were being bombed. #ukraine #mh17

"There have been charges by the Ukrainian government that [a] transport plane was shot down by a missile that was fired from the ground by separatist forces" earlier this month, he says.

There were unconfirmed reports that the flight was carrying 23 Americans, but CNN reported on Friday that none of the passengers checked into the flight using a US passport. The State Department and President Obama said on Friday that at least one passenger, Quinn Lucas Schansman, was a dual citizen of the United States and the Netherlands.

Thoughts and prayers go out to all families of Malaysia flight victims including family of Quinn Lucas Schansman, a dual Dutch-U.S. citizen.

In addition to tensions in the air between Ukraine and the separatists, Wednesday also saw the United States ramp up economic sanctions against Russian state-owned businesses in a bid to pressure Russia to scale back support for the pro-Moscow rebel forces.

T.J. Raphael of The Takeaway contributed to this report.