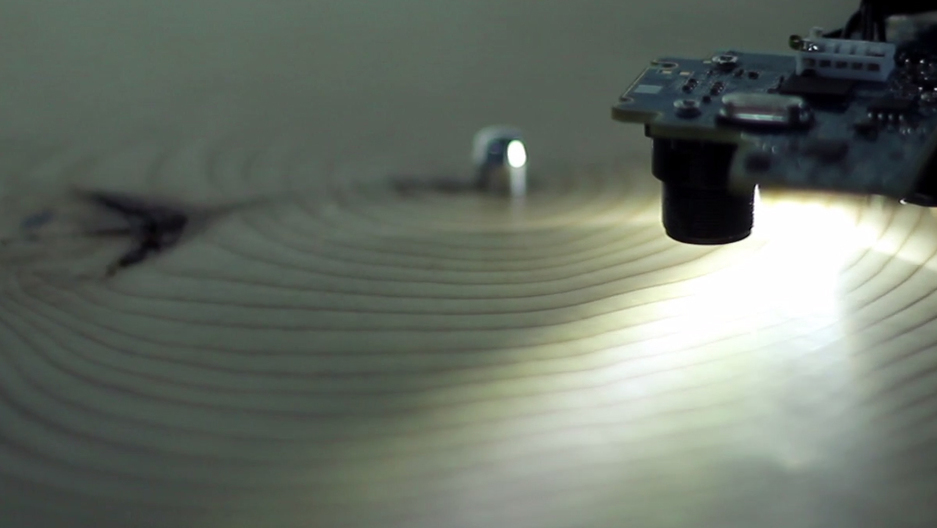 Share
Bartholomus Traubeck noticed that the growth rings of a tree resemble grooves on a record. So he devised a system to play a disk of wood. He calls the projectYears.

Traubeck'scustom record player uses a PlayStation Eye Camera (instead of a needle) to analyze the rings for strength, thickness, and rate of growth. That information is relayed to a computer running the composition software Ableton Live, which translates the data into music. Traubeck subjectively defines a tone scale based on his impressions of the wood's color and texture. Then the software takes the data from the rings, maps it onto that scale, and plays it back using the sound of a piano. Here's how an ash tree sounds:

The music suggests bursts of growth followed by moments of quiet. A flurry of notes resolves on a deeply resonant minor chord. In the space between phrases, you can imagine the tree breathing. As they move between major and minor keys, chromaticand whole-tone scales, these scores evoke the serenity, chaos, and beauty of nature.

Traubeck released a limited edition 12" LP of Years with actual wood veneer on one side, and the sound it generated pressed in vinyl on the other. Alas, those are no longer available, but you can download an mp3 albumof the songs of seven different trees. The composer has not indicated whether any trees were harmed in the making of the record.