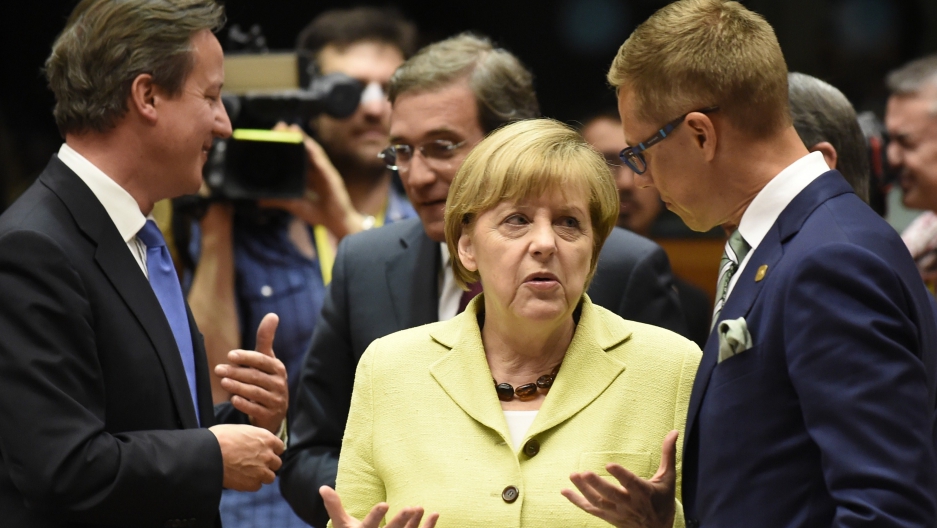 LISBON, Portugal — There's some irony that a European Union summit derailed largely by divisions over how to handle Russia ended up clearing the way for what are likely to be the EU's hardest-hitting sanctions on Moscow.

Disputes among the 28 EU presidents and prime ministers over how tough candidates for new leadership posts should be toward Russia prevented agreement on a team to coordinate the union's foreign and summit policies for the next five years.

But the meeting, which broke up early Thursday at EU headquarters in Brussels, did agree to suspend financing for Russia from the EU's investment arm and draw up a wider list of individuals and companies to be hit with sanctions by the end of this month.

Although unlikely to go as far as American measures against Russian businesses announced Wednesday by President Barack Obama, the EU sanctions represent a significant hardening of the European position.

The EU said it will take aim at "individuals or entities who actively provide material or financial support to the Russian decision-makers responsible for the annexation of Crimea or the destabilization of Eastern-Ukraine." That suggests figures and firms close to the Kremlin.

"There has been no progress regarding Russia's attitude to this crisis," French President Francois Hollande told a post-summit press conference. "We are stepping up the level of sanctions."

The EU will stop loans to Russia from the European Investment Bank that last year totaled $1.35 billion.

EU nations will also use their votes to cut funding for Russia from the European Bank of Reconstruction and Development — which has averaged more than $2.7 billion annually over the past three years.

Cutting such lending could have a significant local impact around Russia. Last year, the EIB said its loans ranged from modernizing power generation in the far eastern city of Vladivostok to preserving 7,300 jobs at a paper mill in Russian's remote north.

Despite the sanctions agreement, the EU summit ended with failure to agree on names to fill the posts of EU foreign policy representative and president of the European Council, which are among a number of key positions falling vacant in the autumn.

The summit had been touted as an event that would forge a leadership team to finally guide the bloc out of economic crisis and win back the support of disgruntled voters who are increasingly turning to euro-sceptic parties.

They claim Mogherini — who became a minister in February — lacks experience and is too soft on Russia.

"We would like to see a person at least not pro-Kremlin," said Lithuanian President Dalia Grybauskaite when asked about Mogherini's candidature.

Poland's Foreign Minister Radek Sikorski had earlier been ruled out by several countries as too hawkish on Russia.

Faced with deadlock, the summit broke up shortly after midnight and leaders agreed to resume talks on August 30.

Behind the scenes, Renzi came in for criticism for failing to compromise, especially since an Italian already holds what is arguably the most powerful position in the EU. Mario Draghi was appointed in 2011 for an eight-year term as European Central Bank president.

Mogherini could still end up with the EU foreign policy job as leaders strive for gender and political balance. She is one of the few female candidates for senior positions and is also from the center-left.

Her appointment would balance the nomination of the center-right former Luxembourg Prime Minister Jean-Claude Juncker, who was confirmed as the new president of the European Commission on Wednesday.

More from GlobalPost: Europe is struggling to find its soul

EU leaders will now have to reflect over the summer holidays. Other names bandied about for the foreign policy job include Kristalina Georgieva, a Bulgarian who heads the EU's humanitarian aid department and Slovak Foreign Minster Miroslav Lajcak.