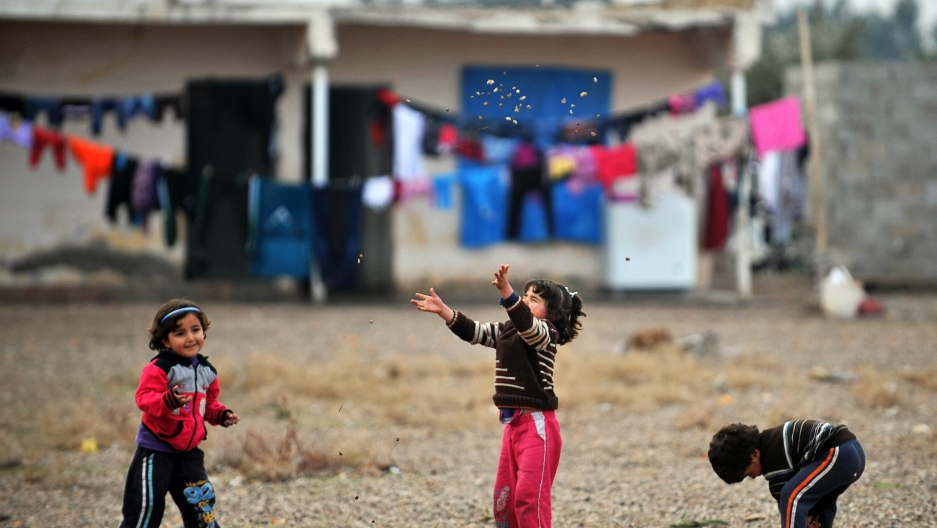 REYHANLI, Turkey — On a balmy spring day, Ghazwan Mahmoud sits on the balcony of a house-cum-aid center on the edge of Reyhanli, a dusty Turkish border town, looking toward the hills that hide Syria’s unfolding tragedy.

Beyond the peaks lie hundreds of newly erected camps housing many of the region’s 120,000 displaced Syrians. Thirty miles farther east in Aleppo, Syria’s largest city, whose eastern districts have been pummeled by air strikes and barrel bombs for two years, over half a million internally displaced persons (IDPs) are holding on. Few are as cognizant of the scale of suffering across northern Syria as Mahmoud, who himself used to live in a town in the Latakia province.

With cigarette in hand, Mahmoud, a coordinator with the aid group Watan Syria, is in the midst of coordinating the movement of baby kits and food into northern Syria: diapers, Sudocrem, powdered milk and blankets. He says today there are 40 IDP camps a few miles over the border in his particular area when a year ago, there were just five. Other aid workers operating along this border say as many as 200 camps along the Turkish-Syrian border have sprung up over the past three years. Some have been bombed. “The siege areas are our biggest concern,” said Mahmoud.

The figures relaying the results of Syria’s war are shocking: Aid agencies estimate 6.5 million Syrians are internally displaced, many of whom have fled the violence in the south for the border regions with Turkey. According to the Internal Displacement Monitoring Service, a Syrian family flees home every 60 seconds.

Mahmoud’s group is just one of the many organizations that have set up shop on the Turkish border, transforming the local economy and serving as an aid hotspot as well as entry point for aid groups into rebel-held Syria. For access to everyday medicine in particular, the IDPs rely on these aid groups. The Syrian government carried out at least 150 attacks on 124 health care points in the three years to March, according to Physicians for Human Rights, a New York-headquartered non-governmental organization. The growing influence of jihadist groups across northern Syria and bombing campaigns by Syrian government forces add to the desperation. Data released in June by the European Commission found that over 200,000 Syrians have died due to a lack of health care.

Doctors Without Borders runs its Syrian operation from the Turkish border. In addition, a clinic in Reyhanli run by Syrian doctors is helping to treat up to 12,000 Syrian out-patients per month. Kotaiba Dogham, an administrative coordinator at the Orient Clinic, said patients come from across the border in Syria for medicine to treat chronic illnesses every day.

“All services are free for Syrians: CT scans, x-rays, medicine. Facial plastic surgery is a huge demand from patients right now,” he said — the conflict has left its mark on many of these refugees. Across the street, the Orient Clinic is soon to open a psychological ward next to a school that began classes for Syrian children 11 months ago. The recent closure of all other Syrian-run clinics in Reyhanli for not having licenses has put the Orient Clinic under serious pressure, he added.

Syrians push a cart with their belongings in Reyhanli, Turkey, after crossing the Reyhanli border crossing. (Ozan Kose/AFP/Getty Images)

The ballooning of the displaced persons population has created a pressing need for what might be thought of as meta-aid: large-scale measurement and planning beyond the aid groups’ here-and-now relief, to coordinate assistance as the scale of the problem increases. Lars Bromley of the UN mapping program UNOSAT provides satellite imagery analysis to relief organizations and is currently analyzing 65 square miles of northern Idlib province. Bromley has charted the growth of IDP camps in a roughly 30-square-mile area between February and May.

“The growth in IDP encampments in this area includes an increase in 23 separate camps to 34 in that time period, though that’s not quite useful as the camps can be small and scattered and the real growth is in the larger camps,” he said.

Turkey’s support for the Syrian opposition and its 560-mile border with Syria has made Reyhanli and the eastern border regions ground zero for the movement of fighters into northern Syria. In recent months this has opened Turkey up to international criticism, for the possibility that it is facilitating jihadist movement on the border. The porous border has also raised the question of whether aid groups may unintentionally be fueling the conflict, their supplies and medical care indirectly relieving pressure on rebel groups, and thus supporting the opposition.

Ghazwan Mahmoud of Watan Syria says aid workers have been approached by fighters inside Syria but maintains there’s a strict policy against collaborating with combatants of sort.

In any event, the prospect of withdrawing assistance doesn’t bear contemplating. Ferhad Jafer, a security officer for an aid organization run by a religious order supporting 17,000 families inside Syria every month, says he sees the crisis worsening over the coming months.

“Inside Syria there are no safe areas. Assad jets can reach anywhere they want and bomb it,” he said, adding that towns and cities in eastern Syria including Raqqa, a provincial capital of 250,000 people, are off limits to western aid groups as they are now occupied by militant jihadi groups.

With government forces emboldened by a series of recent victories over rebel fighters across southern and western Syria, and an encroaching menace in the shape of jihadi fighters emerging from the east, the future is glim for the country’s displaced millions.

“Syria has become like Somalia. We are not thinking of going on with life,” said Mahmoud. “In the end, we just all want to go back home.”