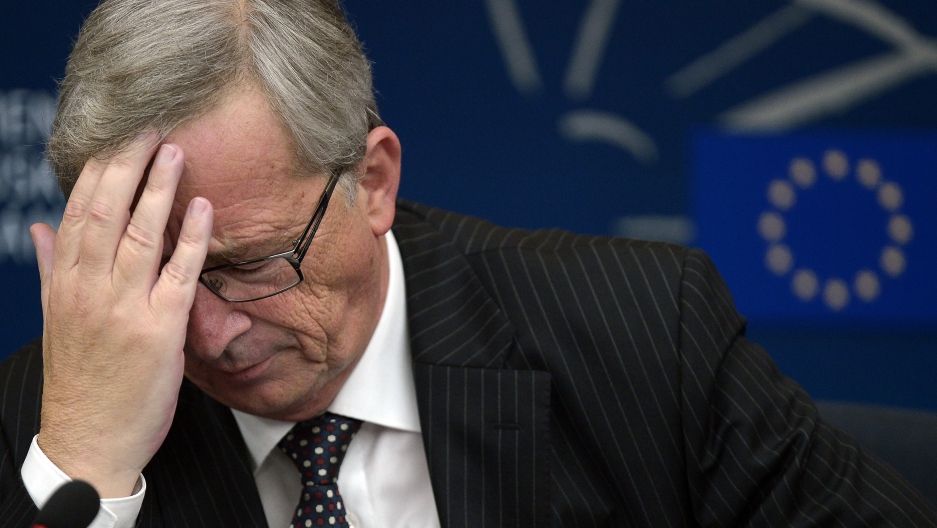 LISBON, Portugal — "If Europe today were to take a selfie, what would be the picture?"

That’s what Italy's Prime Minister Matteo Renzi recently asked the European Parliament before going on to provide his answer.

"What we would see is a face that's tired, resigned,” he said. “Europe's selfie would be bored."

Now the social-media-savvy Italian leader has set himself the task of helping Europe "find its soul again."

His drive comes in reaction to elections in May that gave more than a quarter of seats in the European Union's parliament to parties that want to break up the EU or at least roll back its influence and halt further integration among the union’s 28 member countries.

Those results — particularly gains by the extreme right and far left — came as a shock to Europe's political establishment.

The bloc's presidents and prime ministers will hold their second summit today since the elections in an effort to build a response.

As usual, however, there’s little agreement on the way ahead.

Renzi wants to tie nations closer together, saying he still dreams of a "United States of Europe."

That's anathema to British Prime Minister David Cameron, who's demanding power be repatriated from EU headquarters in Brussels. He warns Britain could vote to pull out of the union in a 2017 referendum if that doesn't happen.

Britain's new Foreign Secretary Philip Hammond — appointed by Cameron on Tuesday — is a euro-sceptic who says he'll vote to leave the EU unless other members grant the UK better terms.

French President Francois Hollande wants a stronger emphasis on growth and employment rather than austerity. Renzi's with him on that, but they face an uphill struggle convincing German Chancellor Angela Merkel to accept anything that deviates from rigorous budget discipline.

There, too, governments are divided as they seek to defend national interests and find a balance between geography, gender and political affiliation among top jobs.

Until recently, Polish Foreign Minister Radek Sikorski looked to be a shoo-in to become the EU's foreign policy chief. But his hard line against Russia's antics in Ukraine has spooked more conciliatory countries such as Italy and the Netherlands.

As an alternative, Renzi has put forward his plucky but inexperienced Foreign Minister Federica Mogherini.

She has support from southern European countries and would counter complaints of too few women in Europe's high places. Unsurprisingly, however, there's resistance from the east — Poland and the Baltic states say Mogherini's too soft on Moscow.

A possible compromise has emerged in recent days in the shape of Kristalina Georgieva, a Bulgarian who has won respect for her hands-on running of the EU's humanitarian aid department.

The other top job up for grabs is president of the European Council, who chairs and sets the agenda for EU summits. Denmark's Socialist Prime Minister Helle Thorning-Schmidt is in pole position.

She faces French opposition because Denmark sits outside the euro currency zone. But insiders say Paris could be won over if French former Finance Minister Pierre Moscovici is appointed as the EU's economics commissioner.

Such horsetrading does little to overcome voter perceptions that the union has become a murky, remote organization where decisions are made behind closed doors by vaguely known officials they didn’t elect and can’t kick out.

To counter such views, rules governing the appointment of the EU's other top job were changed to give a greater role to the recently elected European Parliament.

On Tuesday, the assembly voted 422-250 to approve the appointment of former Luxembourg Prime Minister Jean-Claude Juncker as president of the European Commission.

He promised to put forward a new "jobs, growth and investment package" within the first three months of his mandate to generate over $400 billion in investment over three years.

"My number-one priority and the connecting thread running through each and every proposal will be getting Europe growing again and getting people back to work," he said.

Although Juncker was the lead candidate of the center-right, which won the most seats in May's European Parliament election, his appointment was bitterly opposed by Britain's Conservative-led government.

Cameron warned that the nomination of such a pro-Europe political insider to manage the EU's head office runs counter to public opinion and risks hastening Britain’s exit from the union.

Juncker now has to put together his team. Each EU government will send him its nomination to serve on the European Commission — a 28-strong body that acts as the union's executive, proposing laws and policies and ensuring they’re implemented. Juncker will decide who gets which job.

Most countries are sending high-profile figures in an effort to secure important portfolios — like economics, trade and justice.

In something of a snub to Juncker, Cameron on Tuesday appointed Lord Jonathan Hill, an obscure member of Britain's unelected House of Lords, as Britain's commissioner. Asked recently if he wanted the job, Hill resorted to French. "Non, non, non," he told a Conservative website. "I quite like it at home, in the British Isles."

Whoever ends up running the EU alongside Juncker will have to confront the fundamental problems highlighted in Renzi's speech.

Once lauded as the guarantor of peace and prosperity among countries torn apart by two world wars, the EU is now deeply unpopular.

Southern Europeans accuse the organization of imposing German-inspired austerity they blame for generating poverty and record unemployment. Northerners gripe that Brussels takes their money to subsidize the spendthrift south.

Among the Brits, French and Dutch, there are complaints that the EU's treasured free labor movement rules let in migrants from eastern countries who steal jobs and overburden welfare systems. Hardworking easterners are deeply resentful.

Just 31 percent of EU citizens have a positive view of the union, according to a poll published last year — in Britain the figure was 22 percent, and in Greece, just 16 percent.

Renzi told parliament in Rome last month that the EU has become a "boring old aunt who tells you what to do." He has said Europe needs to go beyond financial spreadsheets to conjure up the spirits of Homer, Dante and Leonardo da Vinci.

However, critics point out that the Italian leader has few concrete proposals to match his soaring rhetoric — beyond easing the pressure on Italy and other southern countries to cut their debts.

Fabian Zuleeg, chief executive at the European Policy Center, a Brussels think-tank, agrees with Renzi that Europe needs to spur economic growth to win back public support, but doubts there’s unity among governments for concerted action.

"It's easy to say that Europe should be doing more, but the key question is: What is it we want Europe to do?” he said. “And are member states willing to give Europe the competences, the means, to actually do it? At the moment, I don't see the political will to do something substantive."

More from GlobalPost: Standing up for Scottish independence

Failure to unite on internal issues risks leaving Europe vulnerable to a raft of issues that will press hard on the officials appointed this week.

Among them, Europe needs a credible position on Ukraine and must redefine its relations with Russia.

Europe’s economy also risks falling further behind the United States and the new emerging powers thanks to the slow economic recovery from the euro crisis.

Carnage in the Middle East is generating new flows of refugees around the Mediterranean and intensifying terrorism fears, while planned independence referendums in Scotland and Spain’s Catalonia region may force the EU to deal with new secessionist states in its midst.

Dealing with all that may leave the EU's new leadership little time to rediscover Europe's soul.