When my editor, Patrick, assigned me a story about how the Russian language is dying, I thought he was being funny.

I pointed out that, yoo hoo! — I speak Russian and so does my entire family. I invited, no, dared, him to step into a crowded elevator in New York City and start complaining in loud Russian about someone’s B.O.

And then I headed to Bright Minds Center in Manhattan for graduation day, where classes in Russian are offered for kids age 2 to 15… and business is booming.

“In the first year, we signed up 60 kids. Now we have around 300 families,” co-founder Anna Volkova tells me. In fact, the school has expanded so fast since 2008 that they are now looking to open a second branch. But when I ferried this news back to my editor, he directed my attention to a national survey conducted by the Center for Applied Linguistics, which paints a different picture. Russian now places last among foreign languages taught in American elementary or secondary schools. At just 0.3 percent, it ranks behind Greek, Arabic and Native American languages.

That wasn’t the case before the Iron Curtain fell. But the US government’s interest in Russian studies was closely tied to their interest in keeping the Soviet Union in check.

As Russian language expert Kevin Hendzel explains, “When the Soviet Union first collapsed, the language money went away from Russian and into Ukrainian and Kazakh and the Baltic languages because there was no capability in the United States. And after 9/11, all the money got pulled into Arabic and Pashtu and Dari and Urdu and a lot of other languages. In a limited pool of dollars, you tend to move them around to where you feel a need.”

That need hasn’t been keenly felt here in the US for years. And the former Soviet satellite countries are dropping Russian as a second language faster than Vladimir Putin can say Pussy Riot. Without government funding, interest in learning Russian depends more on its pop-appeal, but even during the Sochi Olympics, the cultural ambassadors Russia touted were mostly… dead. Safe to say there are just aren’t a surplus of youngsters out there jonesing to read Tolstoy or Dostoevsky in the original.

But there is still one place where Americans are required to know Russian, and that’s Outer Space. Starting in 2011, NASA made learning Russian a requirement for all astronauts, the same year it began relying on Russian Soyuz rockets to reach the International Space Station. But recent tensions over the crisis in Ukraine have had the Russians threatening to end their participation in the International Space Station program. That doesn’t mean American astronauts should put away their Russian grammar textbooks quite yet.

“The Russians take some delight in being the means by which the Americans are able to get to the space station, and there’s still a fair amount of decent science being done up there that can’t be done really anywhere else.” Kevin told me. “So I think what you’re going to see is the effort will continue.”

And according to Kevin, the chill that’s settled over US-Russian relations may paradoxically end up driving us back into Russia’s arms — linguistically speaking that is.

“Within the government, I think they’re looking at it and saying, “We may have run away from this a little bit too quickly. Let’s put a little bit of money here. Let’s put some more chips on the table. Let’s be aware of the advantages that knowing a language at a native level, or certainly at a technical level, give us.”

And yet, Russian will never again be as widely spoken as it was when the Soviet Union straddled the globe like a sumo wrestler, threatening to sit on countries that dared say Nyet to Russian. But just as I was starting to feel depressed that Russian would soon just be a lonely secret I shared with 144 million other native speakers, I met up with linguist John McWhorter, who reminded me just how unlikely the spread of Russian was to begin with.

“Russian is really, really hard. And I say that as somebody who loves Russian very much. Just all of the jangling stuff on the nouns, all the brick-a-brack with the verbs, just try to say something as simple as ‘I went to the store.’ The verbs of motion. Just try to count! It’s a magnificent nightmare.” 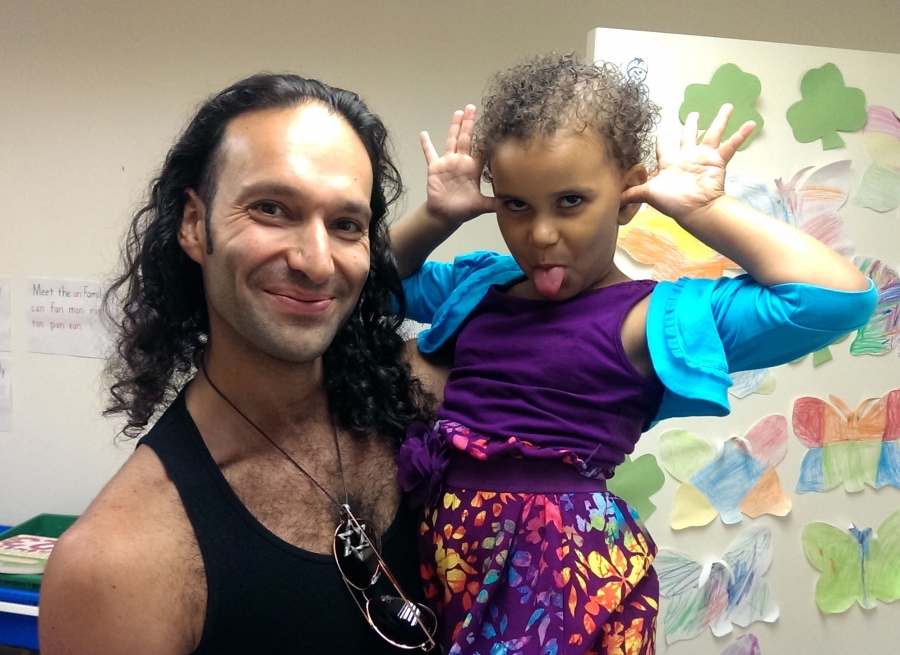 Dmitriy Goldin and his daughter, a student at Bright Minds Center in New York City.
Credit:

You’d think the languages easiest to speak and learn, would also be the most common. But it turns out tanks and bombers spread a language much more effectively than the promise of regular verbs.

Of course, politics and war aren’t the only way a language can spread. Forty years ago, we may have had a lot more Americans speaking Russian as a second language, but the number of Russian immigrants in the US was infinitesimal. Not so today.

At Bright Minds Center, 90 percent of the kids studying Russian are from mixed parentage with only one Russian-speaking parent.

Many of the kids even end up being tri-lingual, like Dmitriy Goldin's daughter, a student at Bright Minds, who speaks Spanish as well as Russian because her mother is a native of the Dominican Republic.

As the saying goes: languages are best learned on the pillow. Or to put it another way: To Russian, with love.