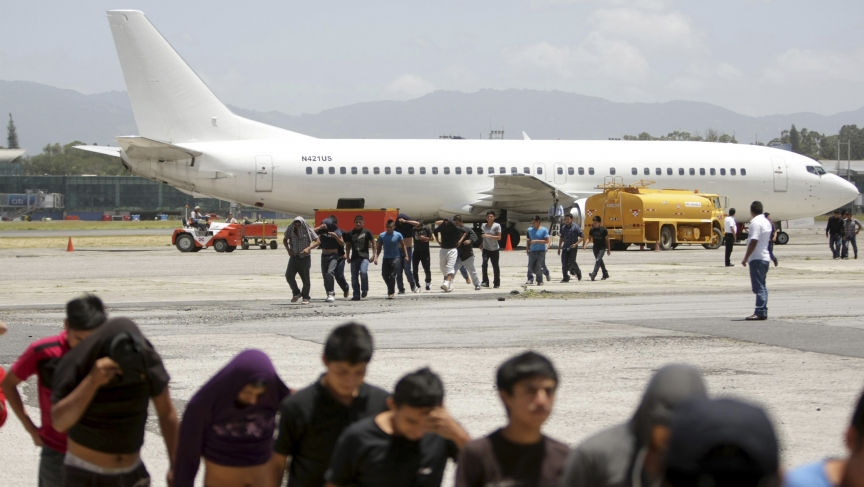 Illegal migrants from Guatemala who are deported from the US arrive at La Aurora airport in Guatemala City, July 10, 2014.
Credit:

Some US Republicans are blaming the humanitarian crisis at the US-Mexico border on President Obama and a "lenient" policy toward unaccompanied children who cross the border  — even though the policy was passed under the Bush administration and few migrants seem aware of it.

Republicans like Speaker of the House John Boehner argue that families are sending their children north chasing rumors that the Obama Administration is giving children a free pass to remain in the US.

“Unfortunately, it’s a crisis of the president’s own making,” said Boehner. “His actions gave false hope to children and their families [that] if they enter the country illegally, they would be allowed to stay.”

But Bob Ortega, a senior reporter with the Arizona Republic, told PRI's The World, “I haven’t seen any evidence of that.” Ortega recently returned from a week-long reporting trip in El Salvador and Guatemala.

“It’s certainly true that there are rumors that are being spread by some of the coyotes — the people who are smuggling migrants across. But that is not what people are hearing in Central America."

Instead, he says, "what we’ve seen is that none of this [surge in migrant children] has anything to do with immigration reform, or with the DACA program, the Deferred Action for Childhood Arrivals.”

Ortega says most people in Central America don’t appear to have a clear understanding of US immigration policy, which is complex. What's more, he says the Central Americans he met understood that they won’t be able to come across the border and remain in the US.

“There’s been extensive coverage about this in the media. The news media in all three countries have been covering this issue just as much as we’ve been seeing it up here. And they’ve been, for the most part, really quite good in their coverage, quite accurate in depicting what is going on here. You’ll see headlines in newspapers saying, ‘Children will be deported back, US says.'"

Children who are apprehended at the border, except those from Canada or Mexico, are automatically put into custody, then proceed through immigration court proceedings. The process doesn't guarantee that migrant children can remain in the US, but the law — passed by Congress during the Bush administration — guarantees their day in court. And with lengthy immigration court delays, children can remain in the US for many months waiting to see the judge.

Ortega says the recent surge in child migrants is simple to explain: children are fleeing violent gangs, which are targeting families and children in a way they hadn’t in the past.

Ortega spoke of a woman he met at a deportation center in San Salvador who had recently been returned there from Mexico with her three daughters. The woman told Ortega that gang members had told her that her 16 and 19-year-old daughters were going to be “the gang’s girlfriends.”

Worried that her daughters would be forced into sex trafficking — a growing problem in Central America — the woman fled first to another part of San Salvador, where the gang caught up with her. She then fled to the countryside, but the gang found her again. So she and her daughters fled for the US.

“She was desperate, she had no idea where she was going to go or what she was going to do,” recalled Ortega. “And she told me, I don’t really want to go to the United States. I don’t speak English. I don’t think they want us there. But the authorities here give us no protection, none whatsoever, and I don’t know what to do.”

US border authorities have detained more than 57,000 children under age 18 crossing the US-Mexico border illegally since October 1, 2013.