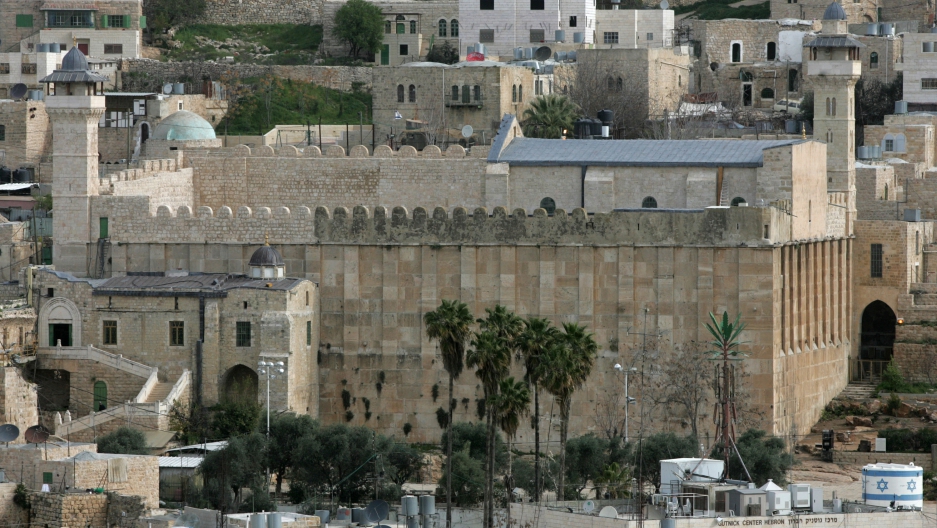 The West Bank town of Hebron, which contains the Tomb of the Patriarchs, sacred to both Jews and Muslims.
Credit: Hazem Bader
Share

It can be dangerous, especially if you're surrounded by breakables. Al-Salam is renowned for its Phoenician glass, an ancient craft in which molten glass of various deeply saturated colors is intricately hand-molded to form wondrous vessels.

But Ramzi Al-Natsheh, 30, whose family owns the establishment, just shrugs tiredly when asked about the riots, chuckles, and says, "It's not a problem. It's all good."

Although as a precaution he doesn’t let his younger brother out onto the streets at night, he says the boys here are only expressing the frustration all Palestinians feel under the yoke of Israeli occupation.

He feels the same indifference bordering on pride about the Gaza-launched missile that hit a Hebron family home on Sunday.

"It's Hamas showing what they can do," he says.

Hebron, one of the most ancient cities on Earth and a stronghold of conservative Islam, is the only West Bank city controlled by Hamas, the extremist group that rules Gaza.

On Sunday, a Muslim family's yard in Hebron was pierced by a projectile that was presumably aimed at hitting the nearby Jewish settlement of Kiryat Arba — not an uncommon occurrence in the West Bank.

Hundreds of rockets and missiles have been launched against Israel since the renewed conflict between Hamas and Israel broke out about a week ago.

In Israel, a sophisticated system of early warning sirens gives people a few seconds to run for shelter when an explosive is headed their way, and the Iron Dome anti-missile system has proven remarkably adept at intercepting incoming rockets, catching about 90 percent of those it has aimed at in mid-air.

But in areas under Palestinian Authority control, there is none of that. "You hear a bjjjjjjjjjjjjjjj," Ramzi Al-Natsheh says, delineating a huge arc in the air with his arm, "then "BOOM."

On Sunday, the M75 missile hit the front yard of Taher Tameem, 32, leaving a crater in the ground. The bomb's blast blew out his living room windows, and pierced the entrance to the home and its interior with shrapnel.

A day later, as Tameem removed the furniture and rolled up the carpet, his living room was still filled with floating and falling white particles, looking like a flour mill.

At the time of the explosion, late Sunday afternoon, Tameem, his wife and three young children were seated in the kitchen, a dark interior room, preparing food for the evening's Iftar, the meal that breaks the daily Ramadan fast.

When the bomb hit, he says, he thought first of his Muslim "brothers and sisters suffering in Iraq and in Syria," then, in quick succession, that "it’s the same as there," and "actually, no, here it is not so bad."

Saleh Rabyeh, a teenage boy who was taking dozens of iPhone pictures of the wreckage the day after the hit, exclaimed, "This is great. It is great that Hamas is doing this. But not on us. It's not good here. It should be on the Jews. With just a little bit more flight this one would have hit the Jews."

"This is so good,” agreed Tameem, the homeowner. “I saw the missile as a blessing from the sky, because it comes from Hamas. Good for Hamas!"

Tameem’s and Rabyeh’s responses are not anomalies: Numerous reports Sunday indicated that Hebronites publicly celebrated the missiles that hit the West Bank, landing in Bethlehem and the settlement of Efrat in addition to Hebron.

Explaining his satisfaction, Tameem said, "At least it is something. It’s a way to respond to the Israelis. It’s a defense against the Jews. It's better than nothing."

Here in Hebron, resentment of Israel is pervasive. Low walls on the road leading to Tameem’s home bear pro-Hamas graffiti.

Fares Al-Natcheh, Ramzi's father, says his shop has not even made $100 since "the story of the boys," referring to the three Israeli teens who were kidnapped at a nearby hitchhiking post on June 12. Their bodies were found about ten days later in shallow graves in Halhoul, a village just outside Hebron.

This is, Fares says, just another in the long line of Israeli injustices inflicted against Palestinians. "There was no kidnapping," Fares announces. "It was fabrication of the Israeli government."

Ramzi, his son, says the episode was "a movie the Israelis invented to come in here and destroy Hamas and the Palestinian government."

Flames and smoke billow from the house of Amer Abu Eisheh, one of two Palestinians suspected in the killing of three kidnapped Israelis, in the West Bank town of Hebron on July 1,2014. Witnesses told AFP that the house was blown up by the Israeli army in what a human rights group said was the first punitive demolition since Israel halted the practice in 2005. (Hazem Bader/AFP/Getty Images)

"I saw the soldiers who came in here," he says, describing search parties looking for the boys. "They looked like they were here on vacation. They had chips with them, they were just walking around the fields. We all know it was just a movie they made."

The boys, according to Ramzi, never existed. He did not see images in the media of the boys' parents alongside those of Mohammed Abu Khdeir, a 16-year-old Arab Jerusalemite who was kidnapped and murdered in what has been called a "revenge killing."

Even if he had seen the pictures, Ramzi says, "it doesn't matter, because it is all part of their movie."

"But," he adds, ending his thought, "those things, if they happen, should not happen. We are all humanity, right?"