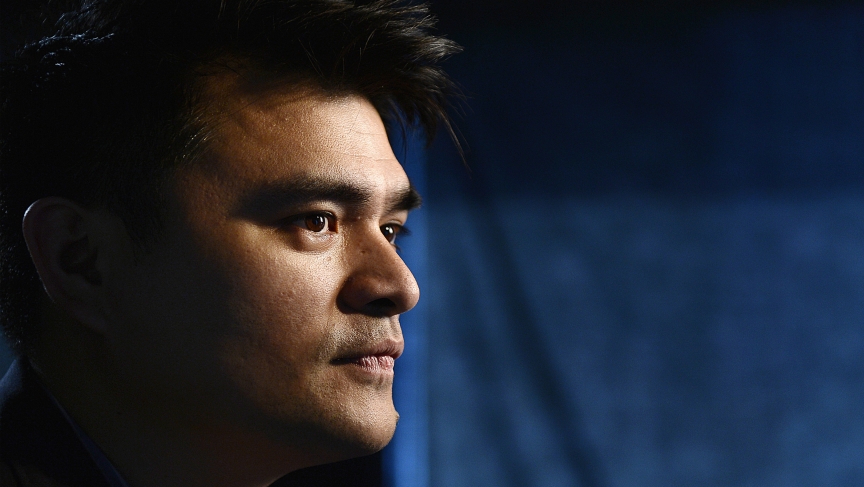 Jose Antonio Vargas, a journalist and director of the documentary, "Documented," in Los Angeles last month. Vargas came to the US from the Philippines to join his grandparents in 1993. Four years later, he found out he was living here without proper authorization.
Credit:

“I lived the American dream, building a successful career as a journalist, but I was living a lie.”

Those are the words of Jose Antonio Vargas, 33, a prominent reporter and activist, in his recent film "Documented." The movie describes Vargas' childhood journey to California to live with his Filipino grandparents.

Tuesday morning, Vargas was detained at an airport in Texas because he lacked the proper papers to be in the US. He was released the same day, after being processed by Border Patrol agents and provided with a notice to appear in immigration court.

In a statement released by Define American, an advocacy group Vargas started, he thanked "everyone who stands by me and the undocumented immigrants of South Texas and across the country. Our daily lives are filled with fear in simple acts such as getting on an airplane to go home to our family."

Like many undocumented immigrants in the US, Vargas came here as a child. It wasn't until he was 16 and attempted to get a driver’s license that he realized he lacked the legal papers to live in the US.

Vargas trained as a journalist and worked for The Washington Post, where he was part of the team that won a 2008 Pulitzer Prize for coverage of the Virginia Tech shootings. He found himself in the national spotlight again in 2011, when he "came out" about his undocumented status in the New York Times Magazine.

Since then, he has become a leader in the movement to push for comprehensive immigration reform that would put millions of undocumented immigrants on a path to citizenship.

For years, Vargas traveled extensively within the US, using his Philippines-issued passport.

But things changed Tuesday, when he was detained at the McAllen-Miller International Airport in southern Texas. Vargas attempted to board a Los Angeles-bound flight after reporting on the rising numbers of unaccompanied Central American children crossing the US-Mexico border.

Standing along the Rio Grande River (the Rio Bravo) as the sun sets. pic.twitter.com/5ZjTLWR3Yy

Just before being detained, Vargas tweeted that he would show security his Philippine passport and wrote, “I don’t know what’s going to happen.”

The only IDs I have for security: Philippine passport and my pocketbook US Constitution @DefineAmerican & @MAC_UTPA pic.twitter.com/IFH0Vb4oX7

As word spread about his detainment, pro-immigrant groups like United We Dream gathered outside of the Texas airport demanding Vargas' release.

Charles Kuck, an immigration lawyer in Atlanta, and a former national president of the American Immigration Lawyers Association, was not surprised that Vargas was detained. “Particularly now, given the current situation where there's intense pressure on the border to make sure they're stopping everyone, it was highly likely he was going to be stopped,” he said.

JUST IN: first photo of @joseiswriting being detained in Texas. we, the people, demand for his release immediately! pic.twitter.com/gRg1vGkWcz

It is unclear to what extent Vargas knew the risks he faced before heading to Texas. Yet he was informed once he arrived. Earlier this week, from Texas, he wrote in Politico: “In the last 24 hours I realized that, for an undocumented immigrant like me, getting out of a border town in Texas — by plane or by land — won’t be easy.”

After being detained, Vargas released a statement through Define American: “Our America is better than this—more humane, more compassionate—and we are fighting for a better America: a country we love but has yet to recognize us.”

The Obama administration will face pressure to show him no favoritism. Asked about the activist’s detention, White House deputy press secretary, Shawn Turner, said it was a “law enforcement issue involving a specific case, so it would not be appropriate for the White House to comment.”

So what happens next?

Vargas will likely face standard immigration proceedings, but his case may not be easy.

“His problem, of course, is that there's no easily available form of relief. He's not married. He doesn't have any children. Those are criterion for people that have been here a long time to seek relief once put into deportation hearings. That's not available to him, at least at the present time,” Kuck said.

Editor's Note: This post has been updated to reflect that Vargas was released later Tuesday by US Border Patrol officers.