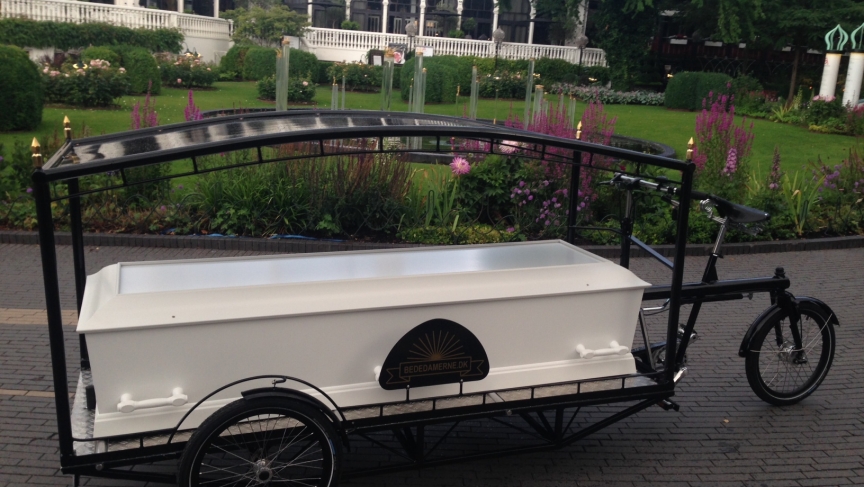 The Danes love their bikes. Official stats indicate that more than half of all Copenhagen residents commute daily to work or school by bike.

In a year, they log enough miles, in total, to get to the moon and back. Twice.

In Danish parks, you see tiny kids barely able to walk tearing around on push bikes. You also see their parents using larger cargo bikes to ferry kids, groceries — you name it.

“We do that a lot in Denmark; it's normal for people to drive around like that,” says Sille Kongstad, who has been transporting her kids in a cargo bike for 13 years.

“It's quite normal for me to transport people around in these bicycles,” Kongstad says.

She just happens to also be one of the few female funeral directors in Copenhagen. And a few months ago, she happened to be looking at pictures of old, stylish horse-drawn hearses.

You know where this is going, right?

“I thought, ‘the old hearses look so beautiful.’ And then I got the idea that you could take the design, the look, and put it into a bicycle.”

As in life, so shall it be in death, right?

Kongstad calls it "her baby," and she unveiled it publicly a few days ago.

“There has been so much talk about this the last four days. People stopping me in the street, saying, ‘Oh, I definitely want to take my last ride in this one.’ It is something that makes sense for people.”

Kongstad's not the first to think of a bicycle-powered hearse. A quick online search yields a few funeral homes in Britain that have tried it, as well as a funeral home in Eugene, Oregon.

But Kongstad's design is truly special.

Her bicycle — technically it’s a tricycle — hearse is made of shiny, yet stately, black metal. The coffin fits in the front, under a specially designed black canopy with gold highlights. The driver pedals from behind.

For the past few days, Kongstad's been wheeling it around the city as local TV stations film it. In fact, Monday, she was on Danish TV's signature morning program, which usually broadcasts from the Tivoli amusement park and gardens during the summer.

She says it was a bit surreal riding into an amusement park on a hearse.

“I put a coffin in the bicycle. I was on Danish television, and they wanted a coffin in it. And it was actually easier to steer when it was heavy,” she says.

To be clear, that was an *empty* coffin.

The bicycle hearse will be put into service, officially, this weekend. The deceased will get a final ride around a Copenhagen cemetery while a family member follows behind playing some music.

Can't you almost hear a New Orleans style funeral procession, but on bikes?

As for me, I ride my bike to and from work almost every day. Not that I think it'll matter all that much at that point, but I'd be happy to let someone else log those miles after I've shuffled off.

And it might be nice to take a final tour.

Not to work, of course. But maybe a few stops at my favorite Boston watering holes.

You know, for the mourners, not me.