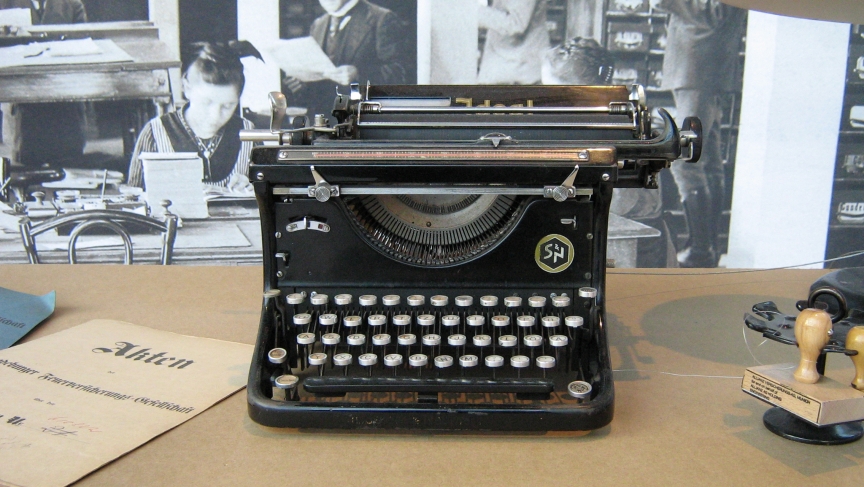 Could German politicians soon be conducting affairs of state on one of these?
Credit:

Germany has grown increasingly irritated over US spying on its government activities. Now, the head of its parliamentary body charged with investigating NSA spying has a possible solution — typewriters.

And not just any typewriters, says legislator Patrick Sensburg. They will avoid the "electronic models," presumably to avoid any chance of NSA eavesdropping on the nation's most sensitive documents. He and his colleagues are also seriously considering not using email any more.

The Guardian has the story and says Russia's federal guard service, which protects high officials, has reportedly already placed an order for 20 typewriters. So far, there's no word on what they plan to do with those pesky typewriter ribbons.

If you're going to have a caliphate, so are we

The Syrian-based al-Nusra Front has declared its own emirate in Syria — seemingly in response to its rival jihadi group ISIS, the Islamic State in Iraq and Syria, declaring itself a caliphate across the two countries. While al-Nusra clearly is trying to muscle in on the space ISIS has carved out, it's avoiding a direct confrontation. Al-Nusra's emirate will cover four Syrian provinces that are away from the territory claimed by ISIS.

United Arab Emirates-based The National looks at al-Nusra's efforts to reassert its influence in Syria, and the ideological changes it is making to implement its new emirate.

In Denmark, your last ride could be on a bicycle

Denmark is crazy about its bikes. Residents of the country's capital, Copenhagen, log enough miles — in a year — to get to the moon and back. Twice. But now there's a new opportunity for bicyclists looking to take one last ride. A local funeral director has taken a cargo bike and customized it so it can carry a coffin on a brief tour to the cemetery.

PRI's The World talked to Sille Kongstad, the woman behind this new bicycle-powered hearse. It's not the first time something like this has ever been tried — but it's certainly the talk of Denmark.

Would your dad — or mom — look good in a fighter jet?

A little late for Mother's or Father's Day, an authentic Royal Air Force Harrier hover-jet is going up for auction — and it could be yours. And with a gift like that, who wouldn't be willing to wait 10 or 11 months to receive it? The vintage 1960s plane served in combat for the RAF before being given to the RAF college for flight engineer training.

But the auction house insists this bird could be put back into the air without too much work. No word on what it would cost for the privilege of spending more money to make that happen. Wired has the story.

It's not just species that are threatened — it's languages, too

Globalization and climate change are threatening species around the world. That we know. But languages are also being threatened with extinction by our changing world. A new study found that the rate of languages dying off is actually very similar to the rate of extinction among animal and plant species.

PRI's Living on Earth talked to researcher Jonathan Loh, who says that connection is no coincidence. When languages die off, the specific environmental knowledge associated with that language also dies off — and, at least sometimes, that can lead to extinction in the animal and plant world.

PRI's the World contributor Alina Simone considers whether Russian could ever die, as interest in learning the language wanes, partly due to the end of the Cold War.

Golf's British Open, one of the four majors each year, is about to get underway in Hoylake, England — and it looks like storms will be a major factor in this year's event. Though Thursday's opening rounds should be dry, and unseasonably warm, storms will move in for Friday's round with showers lingering into Saturday and possibly the final rounds on Sunday, according to AccuWeather.