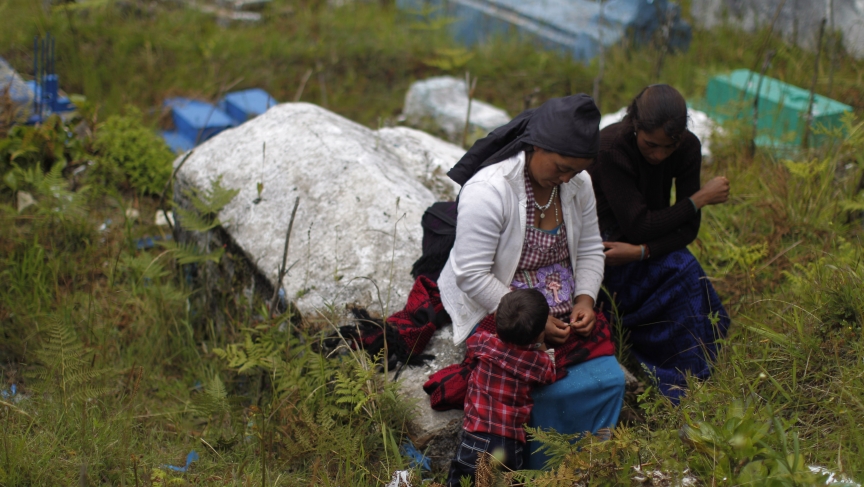 A women and a child sit near a grave for the body of teenage migrant Gilberto Francisco Ramos Juarez, at a cemetery in San Jose Las Flores, north of Guatemala City, July 12, 2014. Ramos Juarez's body was found in the Rio Grande Valley of southern Texas, less than a mile from the US-Mexico border.
Credit:

Republicans and Democrats are pointing fingers at each other and ramping up the political rhetoric over who's to blame for the child migrant crisis along the southern border.

“Along our southern border we've got a true humanitarian crisis underway with children caught in the middle," he said. "Unfortunately, it's a crisis of the president's own making. His actions gave false hope to children and their families that if they entered the country illegally, they would be allowed to stay."

But in fact, behind the theatrics, there are promising indications that a bipartisan deal is possible.

Takeaway Washington correspondent Todd Zwillich says when it comes to an immigration strategy, Democrats think they have a big advantage going into the 2014 midterm elections because of the lack of consensus from the Republican Party. However, the tide may be shifting.

"The right is fired up," says Zwillich. "[But] behind closed doors here in the Capitol, the leaders — and I'm talking about [John] Boehner, [Nancy] Pelosi, [Harry] Reid, and the White House — are trying really, really hard to keep conditions steady so that all of this public recrimination doesn't upset the chances for a deal. It's not going to be easy, and it still could fail."

In early July, President Obama requested $3.7 billion in emergency aid to address the influx of child migrants crossing the border — a request that may actually be fulfilled, despite the tense bipartisan climate.

"What often happens with emergency supplemental [aid] in this environment — what do Republicans say right away? 'Fine, but find a way to pay for it. We're going to make cuts somewhere else in order to pay for this,'" Zwillich adds.

As of late, getting approval for emergency funding can be a Herculean task, even in the face of things like natural disasters. Zwillich points out that it took about three months to get approval for aid in the wake of Hurricane Sandy.

"But you know what John Boehner didn't say when the White House sent this request out? He never said it has to be paid for," Zwillich says. "If you're listening, you take that as a signal that he really, really wants to keep Democrats in the fold and make a deal possible."

When it comes to the Democratic leadership in the House of Representatives, Zwillich says Pelosi seems willing to compromise. According to Zwillich, Congressional Republicans are hoping to change asylum rules and rules surrounding the deportation of these child migrants. The current law makes it difficult to send children back to non-contiguous countries like Guatemala and El Salvador.

"A lot of liberal Democrats and Congressional Hispanics are really against that," says Zwillich. "[Pelosi] said, 'I don't like it, but it's not a deal breaker.' These are two signals coming from the big kids on Capitol Hill."