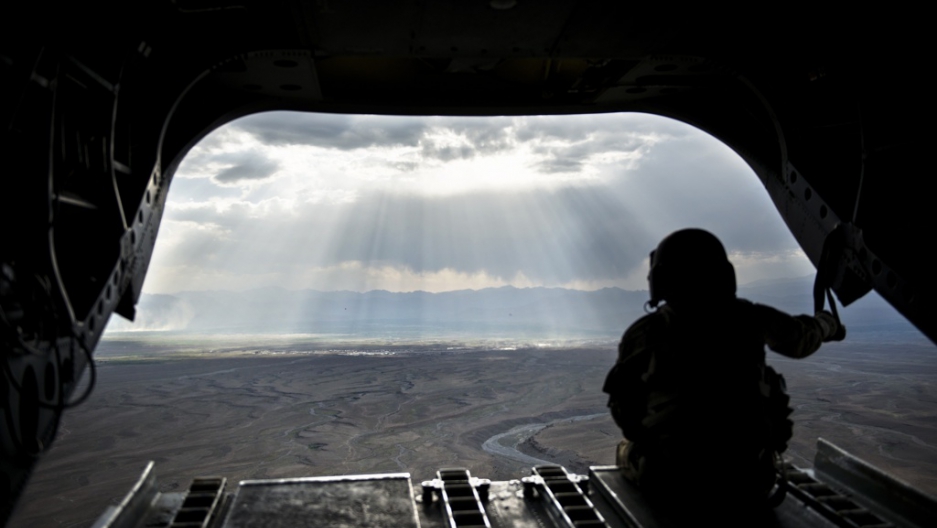 A US soldier looks at a mountain range in Afghanistan's Logar Province from a US Chinook helicopter on May 28, 2014.
Credit: Brendan Smialowski
Share

It’s now been more than a month since Islamic State extremists swept through northern Iraq, gaining large swaths of territory, a huge chunk of cash, and the dangerous mystique of an unstoppable force.

The United States has watched the spectacle with horror as a country that claimed 4,500 American lives and more than $2 trillion all but collapsed.

Meanwhile in Afghanistan, a bitterly contested presidential election had precipitated a major political crisis. Until Secretary of State John Kerry rushed in to save the day over the weekend, the specter of civil war loomed in the background.

This, said President Barack Obama in May, “is how wars end in the 21st century.”

But these “ends” look an awful lot like beginnings.

Now that Obama has made clear that all troops will leave Afghanistan by the time he leaves office — at the end of 2016 — the pundits are busy predicting the consequences. It’s too soon, they say; it’s too rash. Abandoning Afghanistan will bring disaster in its wake, they say. Look what’s happening with the Islamic State in Iraq.

One question keeps surfacing: Will Afghanistan go the way of Iraq?

The pessimists — and those who want to put the blame for the mess squarely on Obama — have no doubt that it will.

“Before Sept. 11, our enemies controlled one nation. Now they will control two — one Islamic caliphate in Iraq controlled by ISIS, and another in Afghanistan controlled by the Taliban and core Al Qaeda,” Marc Thiessen, political commentator and former speechwriter for Secretary of State Donald Rumsfeld, wrote in The Washington Post.

ISIS and ISIL are acronyms for the Islamic State extremists fighting in Iraq and Syria. Al Qaeda disavowed ties to them in February.

There are certainly grounds for concern about Afghanistan’s future. But the danger of “core Al Qaeda” forming a caliphate, a la the Islamic State, is not one of them.

To paraphrase Russian writer Leo Tolstoy, “All happy countries are alike, while each unhappy country is unhappy in its own way.”

Afghanistan is deep in our rear-view mirror

While Iraq’s crisis has all the elements to push it front and center — radical Islamists bent on taking over large swaths of territory, mass executions, the threat of regional involvement, and dark hints of retribution against the West — the conflict in Afghanistan is all too depressingly familiar.

Election fraud is hardly a headline-grabber, and the back-and-forth with the Taliban has been going on for so long that it barely registers in the public consciousness.

“It’s been the same conversations going on for years,” said Alex Strick van Linschoten, co-author of several books on Afghanistan and the Taliban. “The West has given up on Afghanistan.”

Even when something significant does happen it receives scant attention. The Taliban recently took large chunks of northern Helmand, a key southern province and the center of Afghanistan’s thriving poppy industry.

Still, the word out of Washington, and even from US forces in the field, is relentlessly upbeat.

“Everything I see, sir, is good news,” said Army Gen. John F. Campbell, whom the president nominated this month to be the new commander of US and NATO forces in Afghanistan. He was speaking to a skeptical Senate Armed Services Committee during his confirmation hearings Thursday. “I’m looking forward to getting over there, and I think we’re on a positive path right now.”

Officials can try all they like to paint a rosy picture, but they cannot change the reality on the ground, says Frank Ledwidge, a former British military intelligence officer who served in Iraq and Afghanistan and who’s authored two books on his government’s engagement in both countries.

“The US is lying about the capabilities of the security forces in both Iraq and Afghanistan,” he said. “The truth is that the ANA [Afghan National Army] is not capable of holding on without NATO assistance. This is a defeat of such a nature that it cannot be spun; it can only be hidden.”

But even if the Afghan security forces are as bad as Ledwidge says they are, does it matter?

“In Afghanistan there is not the same problem with spillover; there are fewer repercussions for US national security,” said Shadi Hamid, fellow at the Brookings Institution and author of “Temptations of Power: Islamists and Illiberal Democracy in a New Middle East.”

“This cannot be said of Iraq and Syria, which undermine stability on a regional level,” he added.

The Taliban, despite Thiessen’s dire warnings, is not Al Qaeda.

Taliban leader Mullah Omar did provide refuge for Osama bin Laden in the 1990s, but Omar and his movement lived to regret that act of hospitality. News reports from 2001 make clear that the Talban was searching for a face-saving way of handing over Osama, but the George W. Bush administration was having none of it.

“We know he’s guilty. Turn him over,” was the response to Taliban pleas for evidence.

This lack of flexibility got the US bogged down in a seemingly endless war with a fairly murky mission.

In 2009, a newly inaugurated President Obama addressed the issue in a policy speech.

“I want the American people to understand that we have a clear and focused goal: to disrupt, dismantle and defeat Al Qaeda in Pakistan and Afghanistan, and to prevent their return to either country in the future,” he said.

By 2010 CIA Director Leon Panetta estimated that there were no more than 50 to 100 Al Qaeda operatives in Afghanistan — at a time when the US had close to 100,000 troops on the ground.

“The US presence in Afghanistan aims to defeat Al Qaeda and its affiliates,” he wrote in response to advance questions from the Senate.

But the Taliban has never really been an Al Qaeda affiliate, Strick van Linschoten argues. In his book “An Enemy We Created,” written with co-author Felix Kuehn, he posits that “the issue of international terrorism from within Afghanistan’s borders may not necessarily be as big a potential problem as is currently believed.”

This is because the Taliban and Al Qaeda have never really seen eye to eye. The Afghan Taliban has a much narrower focus, van Linschoten says, and is not bent on global jihad.

“The Taliban just want their Islamic Emirate of the 1990s back,” says Anand Gopal, journalist and author of a new book on the war in Afghanistan, “No Good Men Among the Living,” which largely supports van Linschoten’s thesis.

Core Al Qaeda is not in Afghanistan, Gopal argues. “If you want to join Al Qaeda there is Syria, Iraq, Yemen, Somalia,” he said. “Why go to Afghanistan?”

But there’s that common denominator: US ineptitude

There are many surface similarities between Afghanistan and Iraq. Both countries have been put back together after US-led invasions toppled their retrograde regimes, replacing them with administrations more to the West’s liking. This has not worked out uniformly well.

In Iraq, the Shia government has vented decades’ worth of anger and frustration on the Sunnis, who had traditionally led the country.

The US-mandated process of de-Baathification and the dissolution of the Iraqi army, now seen as among the biggest mistakes of the war, created large pools of disaffected armed men who provided fertile ground for extremist Islamic State recruitment.

In Afghanistan, the US-installed government of President Hamid Karzai has unleashed such a flood of corruption that it has largely lost the people’s trust.

The billions in assistance money is routinely pillaged, ending up in Dubai or other financial capitals, and the judiciary is so compromised that many people prefer to take their chances with tribal or even Taliban courts.

The US has been unable to do much about it, despite years of anti-corruption projects that have been deemed largely ineffectual even by the US’ own watchdog on Afghanistan.

Some observers wonder whether the results have been worth the cost.

If van Linschoten and Gopal are correct, the insurgency in Afghanistan is largely a product of American missteps. Heavy-handed counter-terrorism operations, often directed at the wrong targets, or involving civilians, have contributed to radicalizing some segments of the population.

“If the Taliban are now a little bit like Al Qaeda it’s because we have made them that way,” van Linschoten said.

In Iraq the irony is even starker. The US began its “shock and awe” campaign in 2003 to keep Saddam Hussein’s mythical weapons of mass destruction out of the hands of equally spurious Al Qaeda-linked terrorists.

Last week, the press reported that the Islamic State group had seized nuclear materials from university science facilities near Mosul. United Nations and US officials say the grade and quantity of the materials taken is not sufficient to build a bomb.

Still, it is cause for concern.

“Such materials can be used in manufacturing weapons of mass destruction,” Iraq’s ambassador to the UN, Mohamed Ali Alhakim, wrote in a letter to UN Secretary General Ban Ki-moon.

“Ten years ago we invaded Iraq to keep WMD out of the hands of terrorists,” said Paul Fishstein, independent consultant and the former head of Kabul’s Afghan Research and Evaluation Unit. “In the process we so destabilized the country that we may have actually brought about the very thing we were trying to combat.”

Jean MacKenzie spent seven years in Afghanistan, where she worked as a journalist trainer at the Institute of War & Peace Reporting and served as senior correspondent for GlobalPost.

More from GlobalPost: Is Iraq's Maliki taking a page out of Assad's playbook?