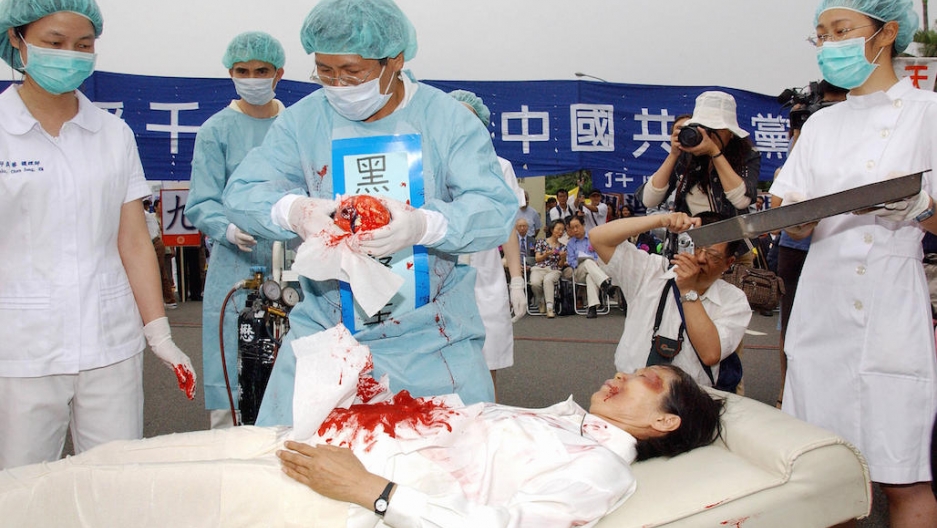 During a Falun Gong rally in Taiwan in 2006, four demonstrators play in an action drama against what they said was the Chinese communists' killing of Falun Gong followers and harvesting of their organs in concentration camps. China recently placed the outlawed group at the top of its list of terrorist organizations, despite no history of violence against others.
Credit: Patrick Lin
Share

HONG KONG — Following the recent brutal murder of a young woman at a McDonald’s in Shandong province by alleged members of the “Almighty God” sect, Chinese state media released a list of the 11 “most active cults” in China today.

Listed first was the Falun Gong, a group with no history of violence or terrorist activities. Contrast that with other groups on the list such as “Almighty God” or “Three Grades of Servants,” members of which have been blamed by authorities for at least 20 murders.

The presence of Falun Gong alongside such dangerous sects shows that Beijing’s propaganda campaign against the group — banned outright in China in 1999 but still active in Hong Kong and Taiwan — is still going strong.

Is Beijing’s fear of the Falun Gong justified? Or is this merely an example of the Communist Party’s urge to stamp out any organizations that may pose a threat, however remote, to the existing order?

Allow us to explain.

Wait! What is Falun Gong anyway?

Falun Gong (also called Falun Dafa) arose out of the so-called “qigong boom” of the late '80s. Qigong is an umbrella term for a number of practices involving meditation, slow-moving exercises and regulated breathing. Qigong groups exploded during this time, attracting tens of millions of mostly urban and elderly Chinese. At one point, more than 2,000 different groups existed.

Falun Gong differed from most qigong groups in that it combined exercises with moral and spiritual teachings. Adherents aim to cultivate “truthfulness, compassion, and forbearance” and refine their “xining,” or moral character.

A person’s xining is affected by their ratio of virtue (positive energy) to karma (negative energy). Virtue is generated through doing good deeds and suffering, while karma accumulates by doing bad deeds.

Who is Li Hongzhi and how did he become Falun Gong’s leader?

Li Hongzhi founded the movement and penned its key texts. According to Li, who has lived in the US since 1996, he came up with the central Falun Gong tenets after studying with Buddhist and Taoist masters from the age of eight. Li claims his teachings are part of a “centuries-old tradition” and distinct from other teachings of the qigong boom. According to Chinese state media, however, Li only began practicing qigong a year before he started his movement.

After a series of embarrassing interviews, including one with Time in which he talked of apocalyptic visions and warned of ghostly aliens infiltrating humankind, Li pulled back from public exposure. (He later claimed that talk of aliens and the apocalypse were meant “as metaphors of ancient Buddhist thought.”)

What kind of authority does Li exercise?

Falun Gong is unusual among spiritual movements in that it has little to no hierarchal structure. The movement has no administrators or officials, no system of membership, and no churches or physical places of worship. Spiritual and ideological authority is completely centralized in Li Hongzhi, but most practitioners have no contact with Li other than through his writings.

Though Li does not intervene in his followers’ personal lives (in stark contrast to, for example, Scientology or the Unification Church), his teachings contain injunctions against alcohol and smoking, and all sex outside of marriage is regarded as immoral. While gays and lesbians are permitted to practice Falun Gong, “homosexual conduct” generates karma and is encouraged to be avoided.

So is Falun Gong a cult, a religion, or what?

Prior to the crackdown, Falun Gong was just one of many qigong offshoots, none of which were regarded as particularly religious in nature. Speaking to GlobalPost, David Ownby, author of "Falun Fong and the Future of China," said “religion” in China “generally means the ‘big five’ religions [Buddhism, Taoism, Catholicism, Protestantism, and Islam] and conjures images of big churches, clergy and formal scriptures.”

While many Westerners may see parallels between Falun Gong — with its charismatic leader, foundational texts and focus on bodily health — and “new religious movements” which sprang up in the US in the 1960s, Ownby argues that the label “makes no sense” in the Chinese context.

Nor, says Ownby, is Falun Gong a cult. “I found that the group generally passed the smell test,” he said. “Yes, they accord a high degree of veneration to [Li Hongzhi] but he’s not around very much so the possibilities of abuse are much reduced. Yes, members are asked to contribute materially to the organization of events, but in my experience that is completely voluntary. Members keep their jobs and remain in society.”

In "Wild Grass: Three Portraits of Change in Modern China," Ian Johnson writes that the “cult” label was designed to “[cloak] the government’s crackdown with the legitimacy of the West’s anti-cult movement.” Johnson argues that Falun Gong does not satisfy common definitions of a cult: “Its members marry outside the group, have outside friends, hold normal jobs, do not live isolated from society, do not believe that the world's end is imminent and do not give significant amounts of money to the organization.”

Heather Kavan, a researcher at Massey University in New Zealand, disagrees. In an otherwise sympathetic ethnographic study of the movement, she argues that Falun Gong “could be described as a cult.”

Kavan draws a comparison between Falun Gong and Maoism, writing that “like Mao, Li has activated millions of people with his rhetoric. His ideology is similarly characterized by moral superiority, defining others as absolute evil, dehumanizing enemies by labeling them snake spirits and possessed by ghosts, extolling the virtues of selflessness and sacrifice, emphasizing the necessity of enduring physical hardship, harassing critics, and denigrating science in favor of his purportedly infallible truths.”

You keep mentioning a crackdown, what happened?

Falun Gong was founded in May 1992. Though the government initially praised Li for “promoting rectitude in society,” the tide was turning against the qigong movements, some of which had attracted tens of millions of followers. In the mid-'90s state media published a raft of articles attacking qigong, including Falun Gong, as dangerous “feudal superstition.”

Falun Gong practitioners were incensed by the criticism and began staging protests and writing to newspapers to complain. When a Beijing TV talk show guest attacked Falun Gong on air, the group was successful in getting the station to sack the producer responsible for the segment and air a pro-Falun Gong film several days later.

This relative tolerance did not last long, however. When Falun Gong practitioners protested outside the offices of a Tianjin newspaper in April 1999, 300 riot police arrived to break up the demonstration and 45 people were arrested.

It was at this point that the group made perhaps the most ill-judged move in the history of peaceful protest.

On April 25, more than 10,000 practitioners gathered near the Zhongnanhai government compound in Beijing to demand an end to official harassment.

Then-party general secretary Jiang Zemin was reportedly enraged by the audacity and scale of the protest — the largest since the Tiananmen Square demonstrations of 1989 — and demanded the movement be “defeated.”

So how exactly did Beijing approach defeating Falun Gong?

Since the crackdown began, hundreds of thousands of practitioners have been arrested and detained. Researcher Ethan Gutmann estimated that at least 15 percent of the population incarcerated in labor camps for the purpose of “re-education” is made up of Falun Gong practitioners. These findings are supported by the US State Department. According to human rights groups, detainees have been subjected to forced labor, torture, arbitrary execution and organ harvesting. In 2009, The New York Times reported that “at least 2,000” people had been killed since the crackdown began.

A concerted propaganda campaign was also launched to cast the movement as an “evil cult.” In the first month, almost 400 articles were published in state media attacking Falun Gong. This campaign reached another level when five alleged Falun Gong practitioners set themselves on fire at Tiananmen Square on Jan. 23, 2001. Two of them died.

The self-immolation event saw the propaganda campaign gain serious traction with the general public, which had previously been largely ambivalent and even sympathetic toward Falun Gong. However, Western media, including CNN and the Washington Post, raised doubts about the state’s account of the incident. The Falun Dafa Information Center claimed that the self immolation was “a cruel (but clever) piece of stunt work,” pointing out that suicide was against the movement’s teachings and that the meditation stances the protesters adopted before they set themselves on fire were performed incorrectly.

So the government won?

Kind of. Falun Gong does not exist as an organized movement in mainland China, and the numbers of people practicing it there (underground) have dropped massively.

However, in a piece of dark irony, the government’s campaign against Falun Gong — likened by social scientist Steven Mosher, in a letter to the Wall Street Journal, to a counter-terrorism operation against “exercising grannies” — has created exactly what it feared.

The early Falun Gong protests were “arguably the most sustained challenge to authority in 50 years of communist rule.” Since then, the group has emerged as one of the most strident critics and opponents of the Chinese government.

Based overseas, Falun Gong-linked media such as the Epoch Times and New Tang Dynasty TV regularly publish anti-communist reports. Falun Gong in Hong Kong have built strong links with pro-democracy groups, and hold regular demonstrations outside the Chinese liaison office (the CCP’s base in the semi-autonomous city) as well as taking part in the Tiananmen Square massacre memorials and the city’s regular July 1 pro-democracy march.

The group also has a significant presence in Taiwan, where it campaigns against integration with the mainland. Freegate, Falun Gong software partly funded by the US government, is one of the most popular tools for circumventing internet censorship in China. In late 2009, courts in Spain and Argentina indicted Jiang Zemin and other former Chinese officials on charges of genocide and crimes against humanity based on lawsuits and decades of campaigning by Falun Gong practitioners.

“Because of the campaign of suppression [Falun Gong] wound up becoming explicitly political,” said Ownby. “Continued [People's Republic of China] efforts to suppress serve only to spur Falun Gong to continue their own efforts. To my mind, a wiser strategy for the PRC would be to ignore Falun Gong, but the regime has never been able to adopt a tolerant attitude toward dissent of any kind.”