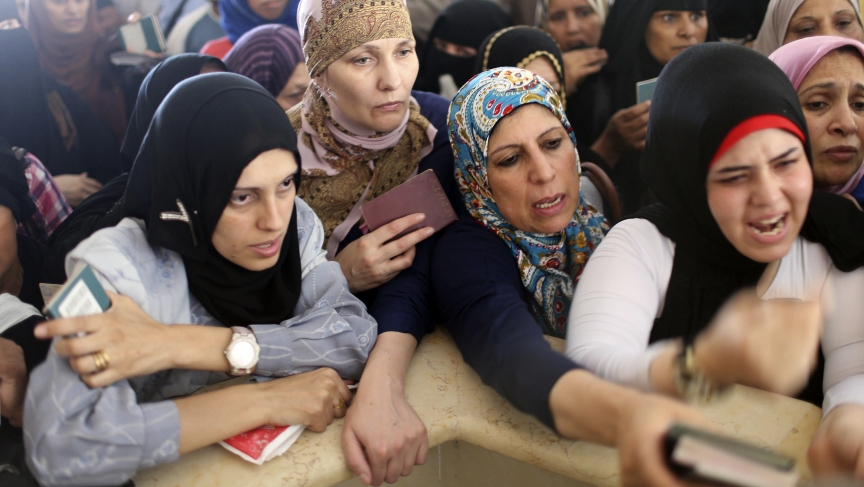 Women hoping to cross into Egypt present their passports as they wait at the Rafah crossing between Egypt and the southern Gaza Strip on July 12, 2014. Egypt's state news agency said Egyptian authorities had decided to open the Rafah border crossing to Gaza on Thursday to allow wounded Palestinians to receive medical care in Egypt.
Credit:

One week into a massive Israeli military campaign in the Gaza Strip, dozens of Palestinians from the US are hunkered down in the isolated coastal territory with no way out. It's not clear if or when they might be able to leave.

“A group of several hundred American citizens appealed to the US embassy [in Israel] and said they wanted to be evacuated,” said Sheera Frenkel, Middle East correspondent for Buzzfeed. That was nearly a week ago, when the current round of hostilities between Israel and Palestinian militants began to escalate.

On Sunday, US officials did manage to help coordinate the departure of about 150 Palestinians who hold US citizenship, US permanent residency or are the immediate family members of those with legal status in the US. The group left Gaza through the Erez border crossing terminal and traveled into Israel.

The passage was accomplished through cooperation with the Israeli government and the United Nations. The evacuees went by bus through Israel, through the Israeli-occupied West Bank and then on to the Jordanian capital of Amman.

But Frenkel says there are still as many as 200 Palestinians from the US who remain stuck in Gaza, “without any hope of getting out in the coming days.”

The Israeli military issued a warning to Palestinian families living in the northern Gaza Strip to leave their homes because they were in the line of fire. Thousands of Israel Defense Forces troops have massed along the border with Gaza amidst talk of a possible ground invasion.

Many Gazans are taking that warning seriously. The United Nations says some 17,000 Palestinians from the northern part of the territory have left their homes to seek shelter at UN facilities located elsewhere in the Gaza Strip.

Frenkel spoke with one Palestinian national from the US currently inside Gaza with her two young children. They had traveled to the border crossing with Egypt at the town of Rafa. But Frenkel says, “in speaking to the Egyptians [at the border,] they told her, 'No US official has reached out to us, and we have no orders to let you through.' And then they turned her and several other families away.”

Many of the Palestinian Americans in Gaza, Frenkel reports, are desperate to get out of harm's way. “They are terrified,” she says. “They feel very unsafe.”

At least 172 Palestinians have been killed by the Israeli military campaign that began one week ago, according to Palestinian officials. The UN estimates that more than three-quarters of the dead were civilians.

The Israeli military insists it is targeting Palestinian militants and their means to launch rocket attacks against Israeli towns and cities. It says it takes care to limit strikes that might harm civilians.