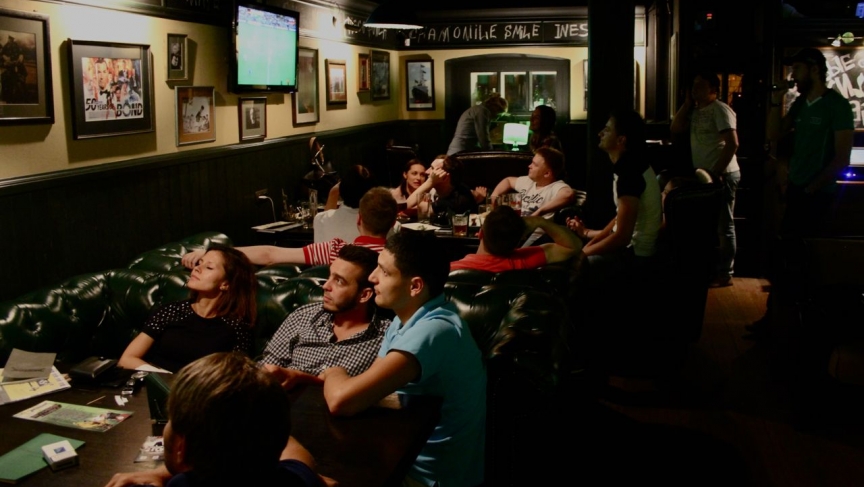 Fans watch the 2014 World Cup final at a pub in Moscow. Russia hosts the next World Cup in 2018, and Russian fans are hoping it will go as well as the 2014 Winter Olympics in Sochi.
Credit:

With the 2014 World Cup in Brazil a thing of the past, the torch now passes to Russia. Russian President Vladimir Putin was on hand at a ceremony in Rio before the final match, promising his country would deliver a tournament in 2018 to rival the Brazil games.

Russians are counting on that.

Russians were huddled in bars and around their TV sets for a late night (in Russia) World Cup final on Sunday. At a local pub in Moscow, Roman Guttsait, a well-known sportscaster with Russia's NTV plus network, was calling the game in-house, though his mind was also on 2018.

“Russians should understand that the World Cup is a major event, and that hundreds of thousands of foreigners will be coming here. And you need to be ready for them,” Guttsait said. “I hope those who are watching tonight see just how peaceful and smoothly the Brazil games went. If so, hopefully, we can do the same.”

Eleven cities will host World Cup matches when the tournament comes to Russia in 2018. Some, like Moscow and St. Petersburg, are cities well known to foreigners and used to foreign guests. Others include towns like Saransk and Syktyvkar in the Komi Republic, regional towns without a lot of foreign tourism. Guttsait wonders how they will handle 20,000 English football fans partying after a game.

Add in concerns about human rights, questions over corruption and the massive sums of money spent, condemnation over Russia's foreign policy in places like Ukraine and Syria, and you'd be forgiven for saying — wait a second — haven't we been through all this before?

In fact, a lot of the same conversations surrounded the run-up to the Winter Olympic Games in Sochi. Only now, according to Guttsait, the success of those games has helped many Russians shed any doubts about Russia's preparedness for the World Cup.

“There's this stereotype here that everything is done at the last second, in poor quality, that we don't treat foreigners well. Sochi proved just the opposite,” he said. “The organization was fantastic and on the highest level. And one thing you can count on for the World Cup is they'll have the money and everything will be built on time.”

Igor Pomoshnikov, another fan at the bar for Sunday night's game, said the success of the Sochi Games allowed Russians to believe in themselves. To think bigger. Expect more.

They also expect a lot from their team.

“Time will tell,” Igor said. “But our president was in the stands watching the match between these two teams in Brazil and I think he'll give a big push toward developing soccer in Russia, beginning right now.”

As proof, Russia can point to its great Olympic comeback. After a disappointing finish in the 2010 Vancouver Games, Russia rocketed to number one in the medal count in Sochi — aided by deep state coffers, great performances by Russian athletes and a few quick citizenships granted to the likes of American snowboarder Zach Wilde and speed skater Viktor Ahn of South Korea.

But soccer has been a different story, cautions another Russian fan, Yulia Lebedova, who has low expectations for 2018.

“I think it'll be great to see the World Cup and go to games and, of course, root for Russia,” she said, “even though — it's no secret — our team is weak.”

Despite hiring the Italian trainer Fabio Capello at top dollar for this World Cup, the Russian team failed to advance to the round of 16. National mudslinging followed, which Guttsait, the NTV sportscaster, says is part of a Russian sports fan's DNA.

“When things are going well, everyone's ready to cheer. But Russia doesn't know how to deal with failure. Just look at what happened with Brazil's team,” Guttsait said. “To let in 10 goals in two games is a catastrophe, and yet Brazilians continued to support their players. The Russian squad didn't embarrass itself anything like that, and yet, fans treat the players with utter contempt.”

Pomoshnikov would seem a classic example. According to him, if Russia falls short, players can expect Russian "f-bombs" to fly their way.

“We cheer hard when they're winning, but when our team fails, we curse hard, too,” he said, laughing. “We're hoping there's no reason to swear.”

And it just wouldn't be Russia without some self-lacerating humor, too. There was even a bit of it on display Sunday night.

In a move not seen by television viewers, but widely discussed online, a prankster named Vitaly Zdorovetskiy streaked across the World Cup final field shirtless, before security grabbed him.

Russian media carried the story and focused on the fact that Zdorovetskiy, now an American, was originally from Murmansk, in northern Russia.

“It seems,” they noted, “Russia made it to the final, after all.”