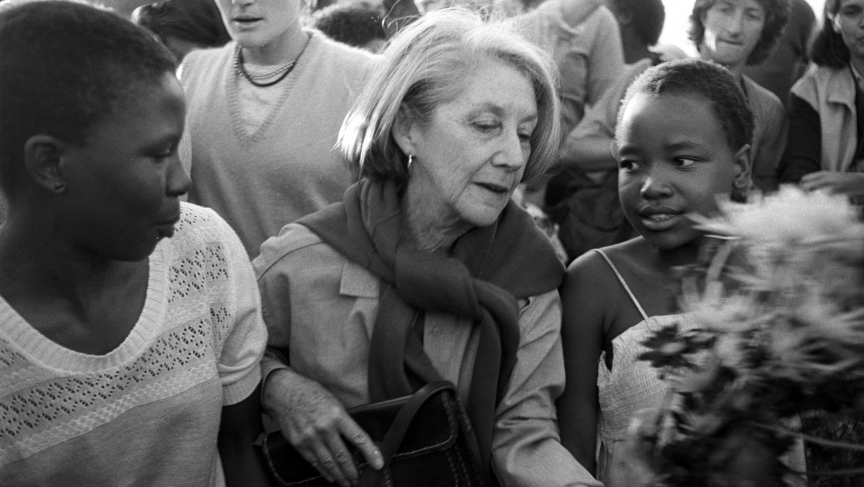 Novelist Nadine Gordimer was among about 300 white liberals who visited Alexandra, the black township near Johannesburg on May 18, 1986 to lay wreaths at the grave of victims of political unrest.
Credit:

But Gordimer, who died on Sunday at the age of 90, was best known to many for her anti-apartheid activism.

In the late 1980s, Gordimer testified in a South African court in support of a group of activists who had been accused of treason. The Delmas Trial, as it became known, is considered an important moment in the final days of apartheid.

Gordimer allowed American author Adam Hochschild, then a young reporter, to tag along with her on one of the final days of the trial.

"The defense lawyers had called her as a witness [the previous week] to speak out to say 'the African National Congress should not be banned, I'm a supporter, I regard Nelson Mandela as my leader.' She did all that," Hochschild remembers.

"She sometimes sheltered people who had to go underground," he says. "I think in the early days [of Apartheid], the authorities didn't realize who she was. And in later days, I suspect that they didn't want to arrest someone at Nadine Gordimer's house because they knew that would be on front pages all over the world."

Young South African novelist Zukiswa Wanner says "when you talk about Nadine Gordimer in the South African literary landscape, you can't forget to mention how important she was to all of us. She managed to straddle pre-'94 and post-'94 [when Apartheid ended] and fit in, and just make everybody feel like an equal — one writer to another — and that was amazing about her."

"Nadine was the cool gramps we all wanted to hang with," Wanner says.