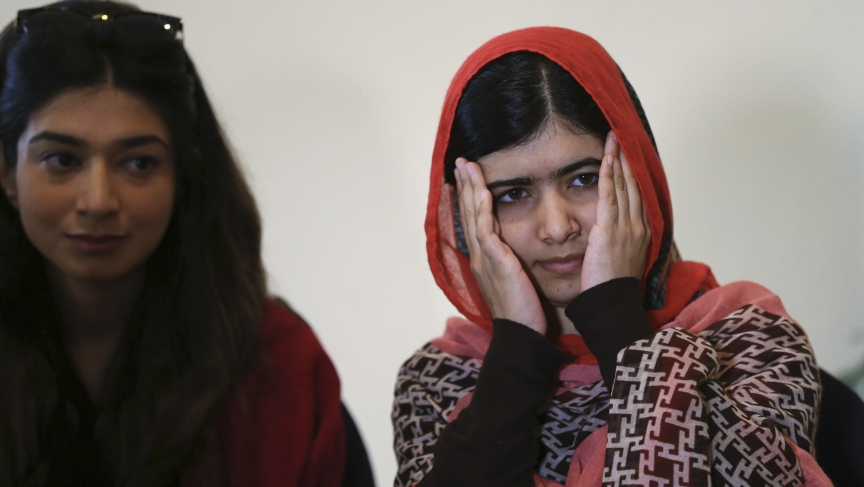 Pakistani schoolgirl activist Malala Yousafzai (R) reacts as she listens during a meeting with the leaders of the #BringBackOurGirls Abuja campaign group, in Abuja July 13, 2014. Seen on left is Malala Fund CEO Shiza Shahid.
Credit:

Malala Yousafzai — the teenager who was shot and nearly killed by the Taliban — is working to draw attention and spur action for Nigeria's kipnapped girls.

Monday was designated Malala Day by the UN, and that prompted the girl, who has become a symbol of resistance to terrorism, to visit Nigeria and its president Goodluck Jonathan.

She told the BBC that she was calling on Nigerians to speak out on behalf of the more than 200 girls who were abducted three months ago from their school in Chibok by Boko Haram, "I'm hopeful that they will raise their voices, and there are some groups who are already raising their voices and saying 'bring back our girls.' So we should continue this campaign here in Nigeria and we should ask the government to take action as soon as possible."

The BBC's Gavin Lee, who's in Abuja, says Malala "didn't pull her punches when she met with the president." She told the president, he says, “the government has been silent for too long, that something had to be done and quickly.” Lee says the president promised to do two things.

First, he promised to do everything possible to bring them back alive as soon as possible. And second, he promised, for the first time, to meet with the parents of the kidnapped school girls. "This has been a real friction point for the people of Nigeria," says Lee.

Malala's visit is ratcheting up pressure on the Nigerian government to do more to rescue the kidnapped schoolgirls, according to Lee. Boko Haram recently made an offer to return the girls as part of a prisoner exchange.

Lee says he has been asking Nigerian government officials for information on the kidnapped girls. "I've spent the last few days trying to work out whether they're all still alive and whether they're still together. There have been reports saying the girls have been splintered off, sold off across the border into Chad and the Central African Republic."

When he spoke to the Nigerian government's anti-terrorism coordinator, he was told that, "according to intelligence, they're all alive, they are all together in a huge forest — the Zambiza forest in the northeast of the country — and there are approximately 219 of them, possibly more. "

Lee says that there were reports two weeks ago that 63 girls had jumped off the back of a truck and managed to escape. "So in all likelihood, there's more than 219 school girls missing," says Lee.

During her visit, Malala also met with relatives of the kidnapped girls. And her trip clearly inspired some Nigerian girls.

One 12-year old girl named Patience told Lee that "Malala was shot and recovered. Now she will fight for girls' education and she will help girls." Patience said that Malala had explained that "we are all sisters, no matter what country you're in, and because Malala is a fighter who was shot and survived, I believe Malala will make a difference."