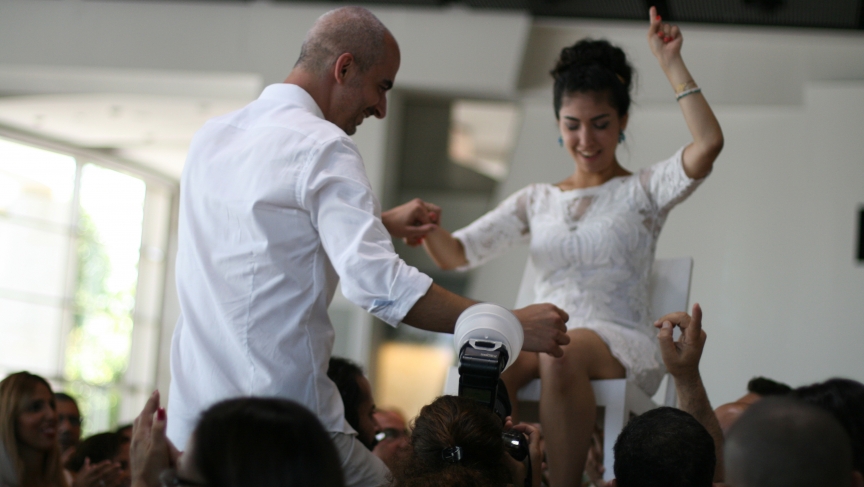 Mati Milstein and Lihi Yona celebrate their wedding July 11. They planned the wedding months in advance, but had to scramble to adjust the party to the realities of war.
Credit:

The latest round of fighting between Hamas and Israel came as a surprise — including to one couple who planned their wedding in Israel for last Friday. Long before Israeli planes struck Gaza and Hamas fired back with hundreds of rockets, their plans were set.

The couple, Mati Milstein and Lihi Yona, got engaged this past February. They were living in New York, but the decision to hold the wedding in Israel was a no-brainer — Yona was born and raised in Israel; Milstein, originally from New Mexico, spent 15 years there.

Yona’s parents helped pick out the venue. “I actually saw it only when I came here a month early to do the planning,” Yona says. “I went to see it and I loved it very much. It’s indoors and outdoors ... We wanted people to have an indoor place with air conditioning, and I liked the idea of marrying also in a place that’s outdoors.”

But in the days before the wedding, the soon-to-be-weds realized there was one detail they had overlooked in picking the venue. “Two days ago I came to my mom and Mati,” Yona recalls, “and I said, 'Do we have protected area at the venue? If there are sirens in the middle of the wedding, do we have a place to put all the guests in?’”

The question was important, because the indoor part of the venue was lined with floor-to-ceiling glass walls. It turned out there was a wall the guests could huddle behind in case of a rocket attack.

But there were other problems, too. Milstein’s photography has taken him to the West Bank and Gaza, where he has a network of close friends.

“These are my friends; this is my wedding,” he says. “I want them to be there and I feel like there’s nothing I can do about it.”

That was Thursday. Milstein and Yona went to bed early and hoped for the best. For the wedding the next day, the couple pair sent a bus to Tel Aviv to bring guests to the party. As the bus made its last stop in Tel Aviv, a siren went off. Everyone emptied out, and guests in fancy dresses ran for cover in a car rental store. The bus eventually arrived at the wedding hall about a half hour north of Tel Aviv.

This was not a normal Israeli wedding, for a lot of reasons. Guests from abroad included a cousin working in Afghanistan. The food was vegan. A wedding singer belted out almost all Arabic music, a nod to Lihi’s Moroccan and Iraqi roots. Midway through the party, the bride and groom changed into Moroccan tunics, and Lihi’s grandmother smeared henna paste on their hands.

Most guests easily transitioned from the threat of rockets to life as usual. One of the few guests to take the situation to heart was an out-of-towner: Lea Barrie, a neuroscience resident from Berlin.

“This is a lot of glass,” she said. “The walls are made of glass, we can see everything outside. Where do we go if anything happens?”

Yasmin Waks, another guest, was less concerned with her own security ... and more worried that while the raucous party went on here outside Tel Aviv, not far away people were waiting for the next airstrike.

“I think I'm taking it much more emotionally when I read about what happens in Gaza than what’s really happening in Tel Aviv," Waks said. "It’s a real danger there, people are getting killed ... In Tel Aviv, we’re protected. We’re not really in danger."

By the end of the party, there had been no more security scares. But true to Milstein’s worries, most of his Palestinian guests didn’t make it. The few who came left shortly after they arrived. But otherwise, the music kept going, the kids danced in the outdoor wading pool and rockets just became one more logistical hurdle on the way to the altar.