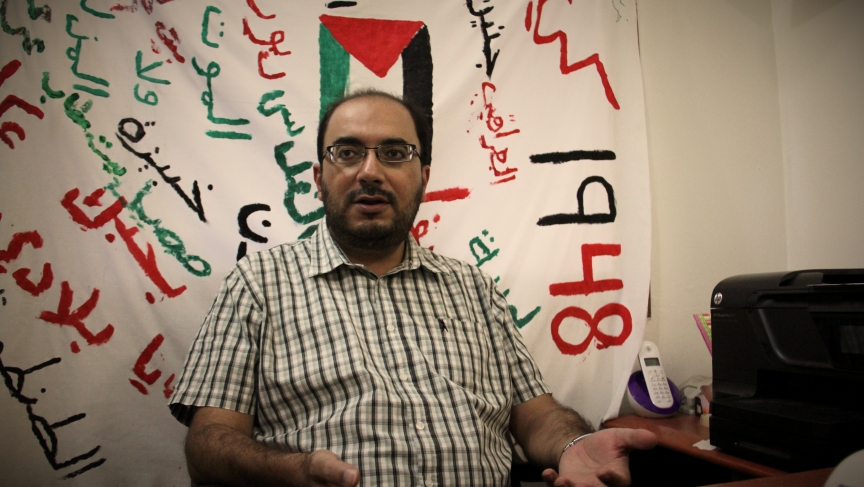 As sirens wail in the mixed Arab-Jewish neighborhood of Jaffa, south of Tel Aviv, Mahmoud Abo Arishieh rails against Israel's assault on the Gaza Strip.

“We stand here against the massacre Israel is doing in Gaza, and most of them are civilians,” he says. “And we are asking Israel to stop bombing Gaza.”

Mahmoud stands amid a sea of Palestinian flags and protesters wearing keffiyehs. But, like most people at this demonstration, he’s an Israeli citizen.

Arab Israelis are collectively known as the “Arabs of ’48” after the year Israel was created. Palestinians who stayed — those who weren’t driven out and didn’t flee — eventually became citizens of the Jewish state.

Even in the best of times, these Arab citizens are often viewed as a fifth column. But during tense moments, they’re treated with particular suspicion by the Israeli state. More than 100 have been detained inside Israel since the first strikes were launched on July 3.

Many Arab Israelis still feel a national kinship with the Palestinians under Israeli occupation. “Palestinians [of] ‘48 are Palestinians,” Mahmoud says. “They know this and they totally support people, civilians in Gaza who are bombed now.”

Some also have family in Gaza and the West Bank. In 1948, the vast majority of Arabs living in Jaffa were expelled, and many of them went to Gaza.

“So when the state is attacking Gaza, they are killing our families,” says Sami Abu Shehadeh, a member of Balad, a mostly Arab party that holds three seats in Israel's parliament. “For us, this is not just a national identity and a national bond that we have with the Palestinians in Gaza. We have also family relationships." It’s a kinship he says Jewish Israelis refuse to understand.

But in times like these, filled with rockets and air strikes, Arab Israelis are in a complicated position. Even if they feel solidarity with Gaza, they huddle in bomb shelters along with Jewish Israelis.

There’s also plenty of blame to go around.

Naja Mattar, who lives in Jaffa, follows the news from Gaza via Al-Aqsa TV — the channel run by Hamas, the group that Israel is hunting with its airstrikes. The channel is like a propaganda arm for the group, but Mattar also watches Hebrew channels.

She says Prime Minister Benjamin Netanyahu just wants to stay in power, and that’s why he’s hitting Gaza now. But Mattar admits that Hamas and Israel share responsibility for this latest conflict, which continues to escalate.

For Palestinians with Israeli citizenship there is little they can do. As their state continues to strike their people, they continue to navigate a complex identity amid an even more complex political reality.