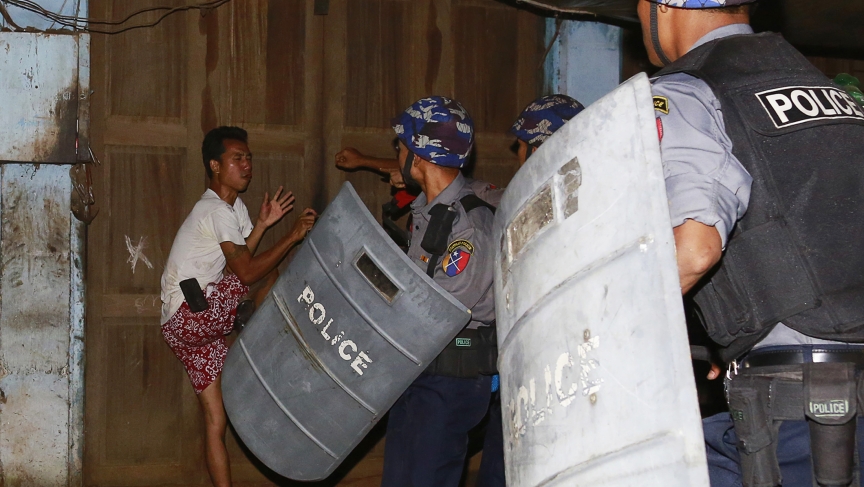 Riot police attack a man during an anti-Muslim riot in Hlegu, outside Yangon, in April. More sectarian riots flared up in Myanmar in July.
Credit:

A four-day-long riot broke out last week in Mandalay, Myanmar's second largest city, following allegations that a Buddhist woman was raped by her Muslim employers. The riots resulted in the deaths of two people — a Buddhist and a Muslim — and at least 14 injuries.

The riots were just the latest in a series of violent confrontations between Myanmar's Muslim minority and the Buddhists who make up most of the country's population. While some mainstream Buddhist groups have accused the Muslim community of conspiring to dominate the whole country, the tension and violence have so far been instigated by religious extremists. The situation calmed down after the government deployed police forces to secure the area and impose a curfew.

Some have speculated that last week's riots could be a plot to inflame religious hatred in the country. A few hours before the riots broke out, the Young Buddhists Association warned people about a plan to provoke violence in different cities:

We received news that the instigators who want to create religion or race-based violence are planning to inflame [the situation] on the Internet's social networks and across the country. Therefore, for the sake of peace and stability, people of different faiths, do stay alert with tolerance and reasoning to avoid being part of the instigation of these wrongdoers!

On the last day of the riot, a crowd gathered to mourn the death of the Buddhist man, Tun Tun, who was killed during the violence. During the funeral, some buildings in the Muslim section of the cemetery were destroyed by angry mourners.

Hsu Nhget, a famous writer in Mandalay, criticized the authorities for failing to control the riots quickly and effectively:

Just look at the funeral of Tun Tun. The crowd included young men who were shouting and holding rods and sticks, like a group of rebels entering the city. I wonder why the authorities allowed this? The police were understandably handling the situation cautiously because the crowd was large but security officials were missing. As a result, some angry men (easily) destroyed the Muslim section of the cemetery.

In addition to religious tensions, there's also a political element to the riots. Thein Win Aung, vice chairman of the peace group, suspected that “Mandalay became a victim” of a “political trick” to stop the people from supporting the "436 campaign," which aims to amend the country's military-backed constitution. He noted that the riots have stopped the people from supporting the campaign, which is a major political initiative of the opposition led by democracy icon Aung San Suu Kyi.

He urged people to be wary of this "trick" to distract public attention:

If we do not understand these political tricks, if we do not control each other, if we allow ourselves to fall into the trap, then not only Mandalay, but the entire country, will be consumed in the flames of chaos.

For its part, the government thanked the residents of Mandalay for their cooperation in restoring order in the community:

[...] Today’s stability is a result of the spirit of Mandalay residents, civil society organizations, and including the media, and religious leaders who wish to maintain the reputation of politeness, tolerance and harmony of their great city together with the timely measures taken by the government. [...]

[...] Religious and civil society leaders together with the responsible youth who managed to defend and protect the people with different faiths from unnecessary misunderstandings also deserve our deep appreciation.

The government also blocked Facebook during the riots as part of its efforts to prevent the spread of hate speech in the country. Myanmar Chief Police Officer Win Kaung said in an interview with Irrawaddy Magazine that blocking Facebook was necessary to stop racial attacks online:

[...] Yes, we blocked it. We wanted to stop the instigation. When they are doing the instigation or spreading the unverified news, this could only provoke the underlying hatred between different groups or people; one's own word or line could lead to a bigger conflict. We need to stop this; we must try not to reach to an uncontrollable situation. We must use any possible means. Even if the situation gets uncontrollable, we must use the most appropriate means. [...]

In addition, there were reports that some journalists who were covering the riots were also targeted by the mob. Threats were made against reporters and news agencies. Because of this, journalists were unable to report many incidents during the four-day riot. U Kyaw Myint, chairman of the Myanmar Journalist Network, said it is time for the government to take action about this issue:

The Mandalay riots have further confirmed the deep divisions in Myanmar along religious and ethnic lines. The continuing violence could seriously derail Myanmar's journey towards a peaceful and modern democracy if it is not stopped.

This story by Thant Sin was originally published on our partner Global Voices Online, a community of bloggers from around the world.