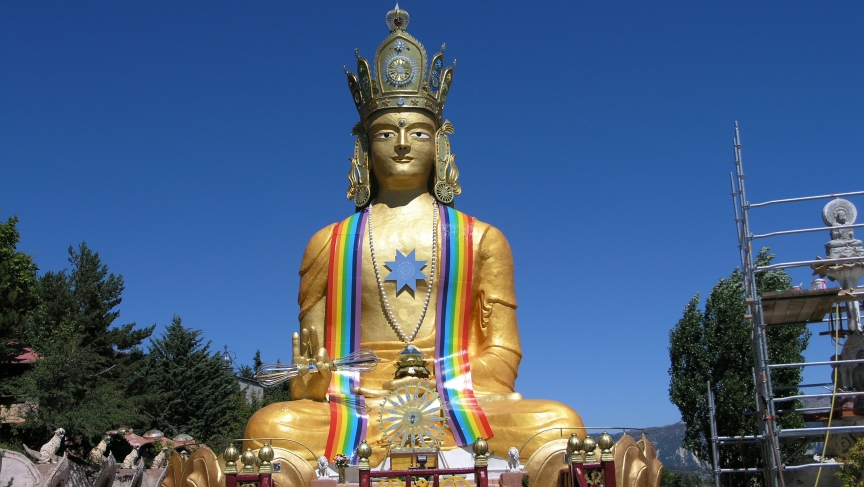 One fall day, way back in 1986, Charline Delporte lost her daughter — to a cult.

“Her new friends just showed up and they packed her things into a van,” Delporte remembers. “She said to us, ‘OK, well, I’m out of here. Good luck to you both.’ I was crying like a baby. I said, ‘Blandine, think for a moment, this isn’t you. You don’t behave like this.’"

This followed months of erratic behavior in which Delporte’s bright, inquisitive daughter dropped out of school, often locking herself in her room to pray for hours on end.

Blandine, then 20, went to Paris. She began a new life going door-to-door, preaching the word of her new faith. Charline says she didn’t hear from her daughter for years until a postcard came in the mail announcing her wedding. Charline went. When she saw her daughter in her wedding dress, she broke down.

“I was devastated,” she says. “I couldn’t stay for the whole wedding. My husband had to take me out because I was so upset. On one side of the aisle was our family; on the other, 150 Jehovah’s Witnesses.”

That’s right: Jehovah’s Witnesses. In the US, it’s a perfectly legal denomination. But in France, it’s considered a cult.

France is perhaps Europe’s most secular country. For more than a century, separation of church and state has been enshrined in federal law. To defend this principle, the French government is willing to endure controversies like protests over its ban on religious wear in school: no Christian crucifixes and no Muslim veils.

But in one corner of spiritual life, the French state does more than maintain the secular dress code: it actively investigates and prosecutes groups it considers a threat to the state as cults. That includes Jehovah’s Witnesses, Scientologists and many forms of Pentacostal Protestantism that are also perfectly acceptable in the US. Some 300 groups are listed by the French state as displaying “cult-like tendencies,” such as manipulating people who are mentally weak, separating members from their biological families or demanding too much money, just to name a few.

For help, Charline turned to a tiny, two-room office in the northern city of Lille. It’s a place where people struggling with cults can come for help.

Charline arrived 25 years ago and never left. Today, she runs this government-funded help center, called ADFI. It’s one of around 50 such offices across France.

Charline says she receives about five new visitors a week. On a recent morning, she saw a “recovering Jehovah’s Witness,” a woman whose sister ran off with a group of crystal-healers and a man bilked of his money by a network of phony shrinks.

All of these people were walk-ins, but this ADFI office doesn’t just wait around for people to find them. Delporte says she also runs an informal network of spies.

“We have here some young, well-balanced guys whom we can call upon. We call them our 007s,” she explains. “We sent them out to listen in at suspicious talks. They’ll even pay the entrance fee. It’s perfectly normal. The idea is just to see what the group in question is up to so that we can help people.”

Spend any time with Charline and one thing becomes clear: she believes she’s on a mission. But the groups she’s after, the ones on the government cult list, have a different view. They complain that these taxpayer-funded centers constitute an unfair attack on freedom of expression.

Eric Roux, the president of the Union of the Churches of Scientology in France, is a thin man in a sharp suit. He works out of Scientology’s headquarters in downtown Paris, a modern, all-white building with a reading room and a lobby filled with books by Scientology’s founder, L. Ron Hubbard.

Roux says the state’s definition of cult behavior is so fuzzy that it’s nearly impossible for religious groups to defend against accusations of wrong-doing.

“If you start to say people are being manipulated because they believe in something which is not true, then you will have a problem with every religion,” Roux argues. “Your belief is yours. Even if I convince you to be a Scientologist, for example, that is your right. It doesn’t mean that you have been mentally manipulated.”

Roux says the government’s blacklist of cult-like groups is arbitrary and often contains groups respected in other countries. A couple of decades ago, he says, the Baptists were on it.

“If you were on this list, you were to be prosecuted and targeted,” he says, meaning that groups become the subjects of endless investigation and harrassment. Roux calls it hysteria with the force of law, and it’s been going on since 1995.

That was the year members of a group called the Order of the Solar Temple staged collective suicides in Canada, Switzerland and France. It shocked the French. The National Assembly soon drew up its first list of suspicious groups and passed a law to go after them specifically.

“Until the law was passed, if someone was raped, there was a normal procedure. The benefit of the law is that if the rape is carried out by means of mental manipulation, then there is an extra punishment,” says Catherine Picard, a former deputy in the National Assembly who co-sponsored the legislation. The law allows for longer jail times or steeper fines.

The same goes for financial manipulation, like tricking a wealthy old lady into signing over her fortune. Picard says the law actually protects freedom of religious expression by keeping people free from charlatans.

“The state oversees spiritual groups by auditing them, but we don’t control doctrine,” she explains. “The state lets anyone choose to join any religion or not join. You’re free to believe in aliens or in churches that aren’t really churches.”

One of those not-really-churches, the French govenrnment believes, is based inside an elaborate mountaintop temple in France’s southwest. It’s named Mandarom Village and is the birthplace of one of France’s oldest and most controversial spiritual groups: The Aumists.

“The name is Mondarom, that means mountain of Om,” says Christine Mori, an Aumist nun. “[W]e are for unity of all religions. We are called Aumisme, because it is derived from Om, a sound that many people repeat: Buddhism; and for Christians, it is amen; for Muslims, ameen.”

Mori says the government’s claim that people can worship as they please is false. She says authorities have been harrassing them since the Aumists’ founding guru was accused of rape 20 years ago. Whatever he may have done, Mori says, using the law to go after an entire movement is unfair.

“It is not the group, it is the person,” she argues. “If someone does something wrong, it is not a fact of religions.”

The Mandarom guru, who claimed he was the son of God, is long gone — he died before his case went to trial. But his voice lives on, echoing from speakers off the 50-foot statues of Krishna, the Buddha, Christ and other deities that rise from the remote mountaintop.

The police have raided the temple many times over the years, even blowing up one of the statues. But Mori says she feels optimistic that the French state will finally recognize Mandarom as a legitimate religion — because Europe already has.

Last year, the European Court for Human Rights ordered France to pay back millions of euros in taxes levied on donations to the Aumists. The ruling, in effect, recognized them as a tax-exempt religious institution.

The French government is infuriated by the ruling, and it says the fight is not finished: neither against the Aumists nor other cults. It currently has 400 cases before the courts under the anti-cult law.

Charline Delporte says the state should continue to go after criminal groups. But she also hopes for more support for her work on the front lines, helping the desperate people who walk through her door every day trying to leave cults.

“’I have no more family, they tell me. Or, ‘my kids won’t talk to me. I did terrifying things. How can I regain my dignity?’" she says. “It’s the person in front of me that matters.”

This piece was first broadcast as part of the public radio program Interfaith Voices and its series "God and Government."