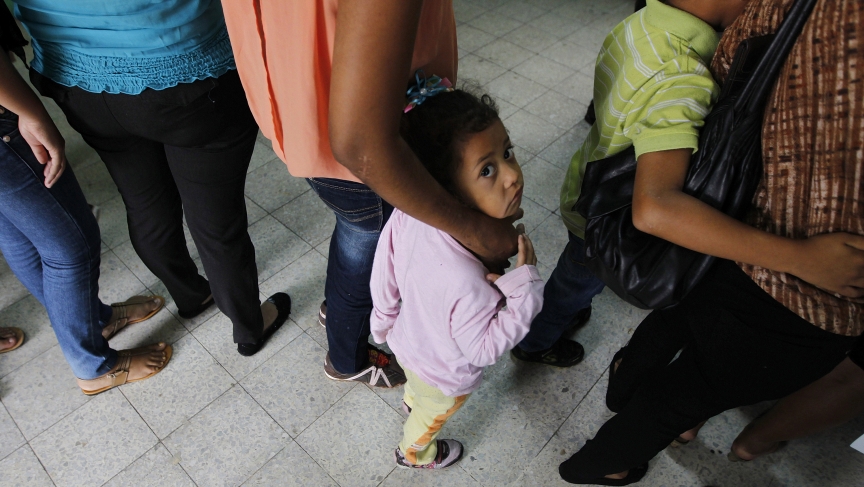 Women and their children wait in line to register at the Honduran Center for Returned Migrants after being deported from Mexico. To stem the flow north, a new US-funded Honduran Special Tactical Operations Group is working to spot unaccompanied minors crossing the Honduran border.
Credit:

She's been reporting in Honduras for nearly two weeks. Originally, she planned to report on how Hondurans are crossing their borders to make the trek to the US.

But when she tripped in front of some uniformed officers outside of her hotel in Ocotepeque, in southwestern Honduras, she saw BORTAC (US Border Patrol Tactical Unit) patches on their sleeves and realized these were no ordinary Honduran police.

"They all looked at me kind of strangely and started laughing," she says. "They just had a different look to them, than your normal police in Latin America. They had the patch on the side of their arm. I recognized that and I thought, 'Huh, that's really interesting, what's US Border Patrol doing here in Honduras?'"

After talking to the officers, she learned that they were trained and funded by a US Border Patrol special operations unit.

The US has trained and funded Honduran border officers before. The difference is that those officers were attempting to block illicit drugs and goods from being smuggled out of the country. Now, they are freshly-trained to spot Honduran children heading north.

Operation Rescue Angels, as the new approach is called, has been up and running for nearly three weeks. It was born out of the rise in unaccompanied children coming from Honduras. According to the Pew Hispanic Center, three Honduran municipalities top the list of where most unaccompanied children are coming from within Central America. And these are the municipalities where BORTAC agents have set up checkpoints.

"It really has changed the dynamic of that town," Carcamo says. Now, with the officers' presence, migration has "really gone underground. At least visually, you can't see people. It's really tough to talk with people who are going to make the trek because it's hard to find them now. So it seems like [the unit] is making an impact. But what's going to happen when they leave the area?"

She says the new program will likely convince Hondurans to find another way to cross the border.

So far, Operation Rescue Angels reports stopping around 90 children from leaving the country. Not much compared to the thousands who have arrived to the US border. But Carcamo says the officers are essentially enforcing Honduran law, which requires minors to have authorized permission from both parents and a passport to leave the country.

But it's the country's increased gang violence and poverty that are a driving force for many young Hondurans. "That's what people talk about here," she says, "that these kids are going to keep going, no matter what. Unless something is done in the country to fix or relieve the whole poverty situation and also the violence."